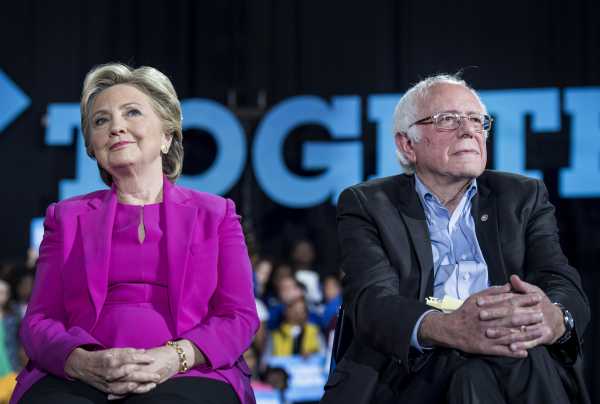 It’s somehow Hillary Clinton versus Bernie Sanders in the Democratic presidential primary again, even though she isn’t even on the ballot.

The former secretary of state stirred up controversy on Monday with remarks reinforcing that there is no love lost between her and her 2016 Democratic primary challenger. The Hollywood Reporter published new details of a forthcoming documentary about Clinton in which she says “nobody likes [Sanders], nobody wants to work with him” and declares him a “career politician.” In a subsequent interview with the publication, Clinton stood by her words and declined to say whether she would endorse and campaign for Sanders if he were to win the Democratic Party’s presidential nomination in 2020. “I’m not going to go there yet,” Clinton told THR. “We’re still in a very vigorous primary season.” Later in the day on Tuesday, Clinton clarified that she would support whoever the Democratic Party nominates.

Clinton’s remarks, both in the documentary and in the interview, predictably kicked up tensions that have, at this point, been simmering for years. The Sanders camp views themselves as slighted in 2016 by a Democratic establishment that stacked the deck for Clinton, tilting everything from the debate schedule to delegate structures against them. The Clinton camp views Sanders and those around him as sore losers who did not wholeheartedly back her in 2016 and who can’t play well with others on the left.

According to a Clinton spokesperson, the interviews in the documentary go as far back as mid-2018 and stretched into the spring of 2019, but it’s not clear exactly when in that time frame she made the Sanders-specific comments. Regardless, the THR interview in which she stood by her assessment and elaborated on it took place in January.

Who would have thought that with the Iowa caucuses two weeks away, we would still be talking about Hillary versus Bernie? But here we are. The 2016 election appears to be the one that won’t die, and the pair seems destined to clash again and again and again, revealing that emotions over the last White House race remain very raw.

What Hillary said about Bernie this time

On March 6, Hulu will release Hillary, a new documentary about the former first lady, senator, and secretary of state and 2016 presidential nominee. And in it, she has some less-than-flattering things to say about Sanders. Namely, according to the Hollywood Reporter, this:

In a follow-up interview in January, Clinton told THR she stands by her assessment and, when asked, declined to say definitively that she would endorse him if he became the nominee. She went on to explain some of her issues with Sanders and his backers:

In the Hollywood Reporter interview, Clinton pointed to recent clashes after a report that Sanders told Warren in a 2018 private dinner that he didn’t believe a woman could win the White House in 2020. Warren has confirmed the report, while Sanders has denied it, and supporters of both have dug in. Some of his backers filled Warren’s Twitter mentions with snake emojis, and the hashtags #NeverWarren and #WarrenIsASnake started to trend. Clinton described the incident as a “very personal attack” on Warren and “part of a pattern” from Sanders.

On Tuesday evening, Clinton said in a tweet that she would do “whatever I can to support our nominee” — while also adding in a bit of snark with regard to those who throughout her career have criticized her for seeming inauthentic. “I thought everyone wanted my authentic, unvarnished views!” she wrote.

While Sanders and Clinton, beyond what they’ve already said, may be determined to let this one lie, more or less, the internet has made no such determination. Hillary Clinton, #NobodyLikesHim, and #ILikeBernie trended on Twitter on Tuesday, and plenty of people weighed in.

There are two sides to the Hillary-Clinton-said-a-controversial-thing coin: On the one hand, she will likely never run for office or hold a major political position again; on the other hand, she has deep ties to the Democratic establishment, and she’s been a prominent figure in the party for years.

Clinton, at this point, has nothing to lose — she’s been vilified basically forever — and so in criticizing Sanders, she may be saying something in public that others in the establishment are saying in private. Establishment fears of Sanders have become a trope in political journalism. Just two weeks ago, the Associated Press published a story along those lines. How the establishment feels about a particular candidate doesn’t matter as much as it used to, but it still makes a difference.

Clinton is still an important figure among Democrats, and while she’s not the most beloved, she’s also not as hated as the coverage of her would have you think. A September 2018 poll from Gallup shows 77 percent of Democrats had a favorable opinion of Clinton — that’s higher than Sanders, Warren, and Joe Biden, in a Gallup poll last summer looking at favorability of 2020 presidential candidates. Her assessment that nobody likes Sanders, however, is off base, among voters: According to a Morning Consult tracking poll, he’s the most popular senator in the country.

And while Clinton may be largely out of the game, many of her allies are not. Last year, her former aides attempted to undercut Sanders’s current campaign, including pushing the media to look into his record on gun control and same-sex marriage and highlighting his use of a private jet while campaigning for Clinton in 2016.

It’s also worth noting that Clinton appears determined to poke the bear every few months or so. In October, for example, she sparred with Tulsi Gabbard after saying in an interview that the Hawaii Congress member was “the favorite of the Russians” as a potential third-party spoiler for Democrats in 2020.

It’s not always easy to say whether Clinton intentionally causes a media firestorm. She has been held up by conservatives as a boogeywoman for 30 years, and she’s taken on a similar aura for some on the left post-2016 as well. But she must have known her Sanders remarks would kick up dust. And with the primaries about to begin and tensions among Democrats already on the rise, her timing is maybe not great. That being said, her endorsement probably wouldn’t help Sanders anyway — if anything, this latest tiff will fire up his supporters even more.

2016 is the election that will never die

There’s plenty of arguing to be done about what happened in 2016 between Clinton and Sanders, as evidenced by Twitter on Tuesday.

Both sides have important points to make. As Vox’s Ezra Klein wrote in 2017, Democratic leaders did really shape the race in a way that was favorable to Clinton in 2016. Some of that was negative for Sanders — few and oddly scheduled debates, early pledged superdelegates — but some of it was also positive, as Klein notes, because the sense that the DNC was behind Clinton also kept other politicians out of the race.

And while the Bernie Bro trope of white, young, very online males isn’t exactly accurate — Sanders has a diverse coalition behind him — Clinton isn’t wrong in her assessment that his supporters’ attacks can be harsh and disproportionate, especially on the internet. Dare to breathe a bad word about Sanders and you risk an onslaught of attacks.

Whatever the details of the back-and-forth, or the arguments on either side, what’s clear is that we’re not yet over 2016. Even the recent dustup between Warren and Sanders felt eerily similar to the last race. Democratic politicians, aides, operatives, and voters want desperately to defeat Trump in 2020, and the persistent what ifs of 2016 heighten anxieties around that. There’s also a lot of concern about party unity whoever the eventual nominee is — and Clinton’s comments don’t help that.