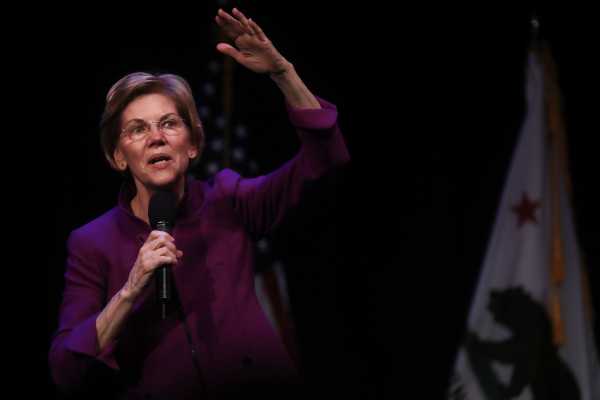 Sen. Elizabeth Warren (D-MA) has rolled out a sweeping plan to provide all Americans with affordable child care, paid for with a new tax on multimillionaires.

Warren envisions a network of child care facilities, subsidized and regulated by the government, for all children too young to attend school. Facilities would charge families based on their ability to pay.

Quality child care is expensive. In many states, it can cost more than tuition at a public university. It’s also in scarce supply.

Contenders in the crowded primary field have already announced other sweeping domestic plans, including on health care and family leave. But Warren is the first 2020 Democrat to roll out a plan that focuses on child care specifically.

A policy like Warren’s would make child care more affordable for millions of low- and middle-income families. It would likely encourage more women to participate in the workforce rather than stay at home, as state-level expansions of preschool have done.

The Warren plan also raises some fundamental questions about what the goals of expanding child care ought to be — questions that have big implications for how Americans structure their everyday lives and make decisions about who takes care of their young children.

Warren’s plan — which you can read more about here — essentially takes on three big problems with the current state of American child care:

Warren’s plan attempts to tackle all three of these problems at once by creating a new government subsidy. The idea is to provide grants to states, cities, nonprofits, schools, and other local partners to “create a network of child care options that would be available to every family.”

The federal government would subsidize the cost of running those child care centers and limit families’ costs. Families earning less than 200 percent of the federal poverty line would pay nothing at all for their children’s care. For families earning more, their expected contribution would be capped at 7 percent of their income — significantly less than what many families pay right now.

At the same time, Warren’s plan would create new, national quality standards for child care centers and raise child care workers’ wages to look similar to those of local, public school teachers. All these changes would almost certainly raise both the quality and the cost of American child care, but Warren’s idea is to have the government bear those costs (especially for low-income families).

An analysis of the Warren plan from the financial services company Moody’s estimates that the program would cost $1.7 billion over the course of a decade with 12 million children receiving care under the new program.

Warren proposes paying for those costs with her plan to tax fortunes worth more than $50 million, which you can read more about here.

Should millionaires pay for child care? Warren says yes. Others say no.

Their new plan would give all Americans access to free child care, regardless of their income. It essentially envisions public day care and preschool as an extension of the public school system: freely available to all citizens regardless of their income. Parents could, of course, choose to send their children to a nonsubsidized day care — just as parents can choose to send their children to private schools — but the public centers would become the base option.

Warren’s plan, however, asks higher-income families to kick in a contribution, a design element meant to lower the overall cost of the program. Less money spent subsidizing child care for wealthy Americans could, in theory, go toward other priorities — things like health care, infrastructure, and countless other priorities.

The other interesting point of contrast is that the Family Fun Pack would offer a child care subsidy to parents who choose to stay home with their children — an element that doesn’t show up in the Warren bill.

This means that the Warren bill would be more likely to encourage higher labor force participation, as families would only get the benefit of subsidized child care if they were not the ones providing that care.

Warren has clearly spent time thinking about this issue. In her 2004 book, The Two-Income Trap, she aired some concerns about how a government program to subsidize child care could unfairly disadvantage single-earner households.

“Day-care subsidies offer no help for families with a stay-at-home mother,” she and her co-author, her daughter Amelia Tyagi, wrote. “In fact, such subsidies would make things more difficult for these families because they would create yet another comparative disadvantage for single-income families. … In effect, government-subsidized day care would add one more indirect pressure on mothers to join the workforce.”

In her book, she suggested “day-care subsidies could be accompanied by offsetting support for families, such as tax credits for stay-at-home parents,” an idea that shares some similarities with the People Policy’s Project initiative.

A spokesperson for the Warren campaign said that candidate’s views on day care subsidies haven’t changed. She would still oppose sending out payments to families footing the bill for child care. Instead, she sees her proposal as creating a public good that is open to all: affordable child care centers.

When asked about the idea of a subsidy for parents who choose to stay at home, the spokesperson said, “We’ve not ruled that out, and we’re not saying we oppose it, but we don’t think it’s necessary to be consistent with Sen. Warren’s previous writing on this.”

Warren’s writing on this topic and her own proposals get at one of the trickiest parts of writing child care policy. There are lots of areas of domestic policy where everyone generally agrees on the goals. In health care, for example, the goals of most policies are to make affordable health care accessible to all Americans.

These aren’t questions with one right answer. But they’re questions that any child care policy is going to have to grapple with — and ones that Warren is the first 2020 presidential candidate to take on.