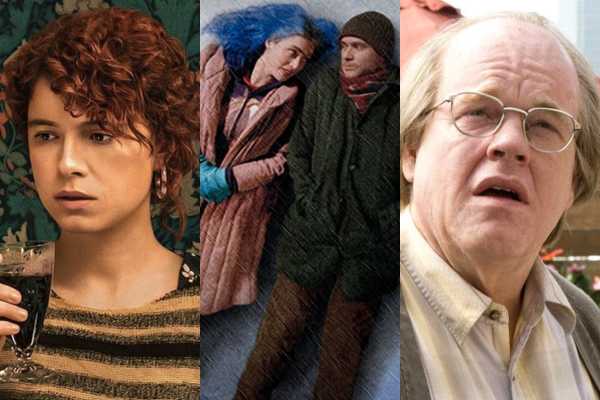 Charlie Kaufman might be the reason I became a film critic, so of course I was excited for I’m Thinking of Ending Things, his latest movie. (It dropped on Netflix September 4.)

Whether he’s writing screenplays for someone else or directing them himself, Kaufman has distinctive stylistic tics and thematic obsessions. He often plays with the form of the movies themselves, self-consciously flipping our expectations about truth and fantasy on their heads, which taught me, as a budding critic, how to look at a film as more than just its plot. (He also published his first novel this year, a 720-page doorstopper titled Antkind, about a failed film critic. I’m still working up the courage to read it, for obvious reasons.) Since he first broke through in the 1990s, his style and themes have become so identified with him that it’s possible to call something “Kaufman-esque,” the way you might say something is “Kafka-esque.”

In fact, Kaufman and Kafka aren’t entirely dissimilar. They share a taste for the surreal and twisty; they prefer you feel your way through their stories, rather than insisting on “solving” their plots like puzzles. But while Kafka’s point is often social in nature, Kaufman’s is existential. In Charlie Kaufman’s world, in movies like Anomalisa and Eternal Sunshine of the Spotless Mind and Synecdoche, New York, our own narcissism and desperation to cure our loneliness conspire to form a maze from which we can never really escape.

I loved I’m Thinking of Ending Things, which is about as Kaufman-esque a movie as you could hope for. It is, unsurprisingly, hard to describe. Based on Iain Reid’s 2016 novel (though with an unmistakable Kaufman twist), it starts out as a story about a young woman (Jessie Buckley) who is embarking upon a road trip with her boyfriend (Jesse Plemons) to visit his parents (Toni Collette and David Thewlis) at their farmhouse. She is thinking of ending their relationship — they’ve only been going out for about seven weeks — but hasn’t worked up the gumption to do so yet.

His name is Jake, but hers keeps changing, especially once they make it to the farmhouse and the weird family meal that awaits them. Is she Lucy? Lucia? Louisa? Is she a painter or a physicist or a poet? Where did she grow up? What does her voice even really sound like? Why does it feel like time is slipping forward and backward?

The pair’s conversations in the car seem erudite and wide-ranging, but they’re often quoting other texts, and in fact a lot of the movie’s quotations and speeches and monologues are cribbed from other sources. You get the sense that art is insufficient to address the brokenness of our hearts and the gulfs between us. And meanwhile, mysterious scenes featuring a sad-sack school janitor (Guy Boyd) are cut into Jake and Lucy/Lucia/Louisa’s trip, layering in the feeling that something uncanny is going on.

As I said, I loved it. It embodies all of the sadness and yearning I’ve come to expect from a Kaufman movie, and it feels like a filmmaker’s meditation on the limits of his medium as well as the limits of our lives and loves. It’s wistful, and I wanted to watch it over again immediately when it was done.

But I’m Thinking of Ending Things also works best if you view it as being on a continuum with Kaufman’s work, rather than just a stand-alone film. In fact, I wouldn’t recommend anyone see it without first watching at least one other Kaufman film.

So here are five of my favorite Kaufman films, all of which you can stream right now, any of which would form a fine introduction before you launch into I’m Thinking of Ending Things.

Kaufman worked as a TV writer during the first half of the 1990s on shows like The Dana Carvey Show, but in 1999 his first feature film script made it to the big screen, directed by Spike Jonze. (Jonze had made many music videos, but it was also his first feature.) It quickly sets down what would become some of Kaufman’s signature interests — narcissism, the distance between us, the impossibility of really understanding someone else’s experience, and some truly brain-altering narrative tricks. The film stars John Cusack as an unhappy puppeteer in an unhappy marriage who, at his unhappy job, accidentally stumbles on a portal into the mind of actor John Malkovich (playing himself). It is an unforgettably weird meditation on loneliness and the desire to be someone else, and it landed three Oscar nominations — not bad for a feature debut.

How to watch it: Being John Malkovich is streaming on Netflix. It’s also available to digitally rent or purchase on iTunes, Amazon, YouTube, Google Play, and Vudu.

Kaufman’s third feature script, Adaptation, is itself an adaptation of a kind; its source material is Susan Orlean’s 2000 nonfiction book The Orchid Thief, about the eccentric world of Florida’s orchid collectors, growers, and smugglers, including a man named John Laroche. But it is anything but a typical adaptation. Instead, Kaufman teamed up with Jonze again to tell a story about a guy named Charlie Kaufman (Nic Cage) who is trying desperately to adapt a book called The Orchid Thief by Susan Orlean (Meryl Streep), who is following an orchid thief named John Laroche (Chris Cooper). Charlie has a twin brother named Donald (also Cage) who keeps offering him advice on adaptation; he also seeks the advice of Robert McKee (played by Brian Cox), a famous real-life screenwriting guru. Adaptation’s screenplay is credited to both Charlie and (the fictional) Donald; “they” received an Oscar nomination, and the film netted three more for Cage, Streep, and Cooper (who won). As movies about screenwriting and angst go, Adaptation is almost certainly the best.

How to watch it: Adaptation is available to digitally rent or purchase on iTunes, Amazon, YouTube, Google Play, and Vudu. It’s also streaming on Tubi.

Eternal Sunshine of the Spotless Mind (2004)

Arguably Kaufman’s most well-known screenplay is Eternal Sunshine of the Spotless Mind, directed by Michel Gondry, whose whimsical tendencies are a good fit for Kaufman’s melancholy story about memory, fate, love, and regret. Jim Carrey and Kate Winslet play Joel and Clementine, who meet seemingly by chance and become a couple on a train to Montauk. But they live in a world where it’s possible to have your memories erased, and soon we — and they — are left with a question: If you knew a relationship was likely to end in disappointment, would it still be worth it? Kaufman won an Oscar for his screenplay, which tells its story in a nonlinear fashion and approaches a topic that sci-fi has often explored (the erasure of memory) in a way that’s deeply moving.

How to watch it: Eternal Sunshine of the Spotless Mind is streaming on Netflix. It’s also available to digitally rent or purchase on iTunes, Amazon, YouTube, Google Play, and Vudu.

Kaufman finally went behind the camera for Synecdoche, New York, a truly bizarre movie I have never really been able to explain but love dearly. It concerns a theatre director (played by Philip Seymour Hoffman) who — ailing, miserable, and lonely — suddenly wins a MacArthur genius grant and has the means to enact his dream project. He wants to make the most authentic, meaningful play possible, a show that has something to say about real life. The show becomes increasingly more elaborate, and the lines between real life and fiction blur as he pursues his quest. The title is a play on the literary device of a “synecdoche,” in which a part of a whole stands in for the entire whole, and it is a weird, ambitious, achingly bittersweet movie.

How to watch it: Synecdoche, New York is available to digitally rent or purchase on iTunes, Amazon, YouTube, Google Play, or Vudu.

Anomalisa was the first R-rated film to be nominated in the Best Animated Feature category at the Oscars, which is a pretty telling accomplishment. Kaufman directed and adapted the very darkly comical film from his own 2005 radio play. It’s the tale of Michael Stone (voiced by David Thewlis), a customer service representative who is alienated from the world around him. He’s on a business trip in Cincinnati, staying in a generic hotel, and everyone he meets seems to have the same face and the same voice (Tom Noonan’s voice, in fact). He’s miserable, alone, and self-obsessed, until he meets a woman named Lisa (voiced by Jennifer Jason Leigh), in whom he suddenly sees an escape. Using stop-motion animated characters allows the film to do what live-action couldn’t as easily: It shows the way Michael sees the world as it morphs around him, evoking just how trapped in his own mind he truly is, and why he stands in the way of his own connection with anyone else.

How to watch it: Anomalisa is available to digitally rent or purchase on iTunes, Amazon, YouTube, Google Play, and Vudu. It’s also available to stream on Pluto TV.

I’m Thinking of Ending Things is now streaming on Netflix.

Millions turn to Vox each month to understand what’s happening in the news, from the coronavirus crisis to a racial reckoning to what is, quite possibly, the most consequential presidential election of our lifetimes. Our mission has never been more vital than it is in this moment: to empower you through understanding. But our distinctive brand of explanatory journalism takes resources — particularly during a pandemic and an economic downturn. Even when the economy and the news advertising market recovers, your support will be a critical part of sustaining our resource-intensive work, and helping everyone make sense of an increasingly chaotic world. Contribute today from as little as $3.