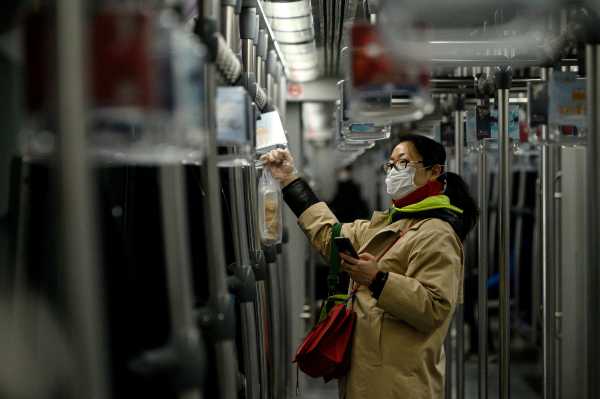 The outbreak of the Covid-19 coronavirus disease has taken the lives of more than 2,770 people — with a vast majority of those deaths in China plus a growing number in countries like South Korea, Iran, and Italy — and infected more than 80,000 as of February 26. As the world scrambles to contain the public health crisis, global businesses are starting to take a hit, particularly in the technology sector.

China — which is the second-largest economy in the world — has all but halted its production of consumer goods such as phones, clothing, and automobiles for the past several weeks. The country has taken on unprecedented “wartime” measures to control the virus’s spread, such as placing severe restrictions on some 780 million people and instituting mass quarantines in major cities.

The Wall Street Journal reports that the lockdown on Chinese manufacturing has caused global markets to “shudder” and is casting an “ever-widening shadow” on the economy at large. That’s particularly relevant in the tech industry, which depends on Chinese labor to build everything from computer chips to cellphone parts. In recent days, China has started reopening its factories (despite public health concerns) in an effort to restart its economy, but manufacturing sites are running at a far lower capacity than usual.

It’s still too early to measure the full financial impact of the virus on the tech industry, but the early signs don’t look good. Technology shares, which had been steadily increasing this year — even during the beginning of the global outbreak — recently took a dive, although they have recovered slightly nearing Wednesday’s NYSE closing. The S&P 500 information technology sector, which analysts use to measure total shares in the tech industry, had fallen by over 9.3 percent from last Thursday’s close compared to a drop of 7.3 percent across sectors, Reuters reported on Tuesday.

Stock markets fluctuate all the time based on a variety of factors, and the coronavirus is impacting stocks across industries, not just tech. But the tech sector’s recent plunge is especially concerning given its recent track record of being resistant to any significant hits, and the fact that the top five major tech companies — Microsoft, Apple, Amazon, Facebook, and Google parent Alphabet — account for a large portion of the total stock market.

Apple — the world’s most valuable tech company — said it is reducing its revenue targets this quarter in a rare company advisory released on Monday. Tesla said last week that “health epidemics” are a risk to its business. Amazon, whose e-commerce business relies on the flow of goods between China, the US, and other countries, has not released any similar warnings but is stockpiling supplier items from China to protect against future disruptions due to the virus. And Chinese companies themselves are feeling the hit, with tech giant Alibaba calling the outbreak a “black swan” event (as in, unpredictable) on a recent earnings call.

Social media companies — which are trying to keep up with a slew of misinformation about the virus’s origins and spread — are still financially less impacted than companies like Apple since their main line of business isn’t selling physical goods. But even Facebook has been affected, setting reduced production goals for its Oculus Quest virtual reality headsets in part due to a slowdown in Chinese manufacturing because of the virus.

And virtually all the major tech companies — Apple, Google, Facebook, Amazon, and Microsoft — have restricted employee travel to China, either banning or limiting it only to matters of critical importance. They’re also asking workers returning from China to work from home for up to two weeks.

In some cases, tech professionals in the US are so concerned about the virus that they’re taking other precautions, such as wearing breathing masks and eliminating handshakes in business meetings, as Recode previously reported. For now, there are only four confirmed cases in the San Francisco Bay Area, but some feel these preventative measures are important given the high volume of travel between China and Silicon Valley — and concerns that the virus could quickly grow out of control given how it has spread in Asia.

Overall, the economic and social impact the coronavirus is having on the tech industry puts into stark relief the close connection between Silicon Valley and China, not just for manufacturing but for supplying a workforce of highly skilled engineers, investor funds, and academic collaboration.

Outside the workplace, tech companies are pulling out of major global conferences or canceling them altogether. As Recode reported last week, Facebook canceled a 5,000-person global marketing conference in San Francisco. And the world’s largest phone trade show, Mobile World Congress, was canceled after major tech companies like Amazon pulled out over coronavirus concerns.

Here are more specifics on some of the main ways we are seeing coronavirus impact the global economy, particularly in the tech industry.

Virtually every major US tech company that builds physical products — like cellphones, computers, or video game consoles — relies on a vast Chinese workforce to manufacture products for cheaper than could be done in the US.

In the past few weeks, though, that supply chain, which includes everything from raw parts to finished products, has been fundamentally disrupted.

Factories in China have been shut down. Hundreds of millions of migrant workers who were visiting family in cities outside the main manufacturing hubs for Chinese New Year were quarantined. Some are beginning to return to work, but reports indicate that as of earlier this week, over two-thirds remain stuck. Roads have been blocked, trains halted, and flights canceled.

The New York Times reports that even though some factories are starting up again, they are still “operating well below capacity.” And there are serious public health concerns about whether reopening the factories is the right decision at all, considering the virus continues to spread in China and elsewhere.

Companies are increasingly talking about the threat of the virus in public business announcements. A MarketWatch report found that out of the S&P 500 companies’ recent earnings calls between January 1 and February 13, 38 percent of transcripts included the term “coronavirus” at least once.

Another major tech company with its supply chain impacted by the virus is Amazon. It’s estimated that more than 40 percent of Amazon sellers are based in China, which means that a large chunk of the products people buy comes from the country. In addition to that, a large portion of US-based sellers source their products from China.

According to a recent Business Insider report, Amazon reached out last week to a number of suppliers for products sold in the US but made in China and encouraged them “to stockpile on certain products shipped from China, in anticipation of potential supply chain slowdowns caused by the coronavirus outbreak in the region,” according to the outlet.

In response to a question about this practice, Amazon sent Recode the following statement: “Out of an abundance of caution, we are working with suppliers to secure additional inventory to ensure we maintain our selection for customers.”

Facebook also said the manufacturing of its Oculus Quest headsets is impacted by the outbreak.

“Oculus Quest has been selling out in some regions due to high demand,” Facebook spokesperson Anthony Harrison wrote in a statement to Recode. “That said, like other companies, we’re expecting some additional impact to our hardware production due to the coronavirus. We’re taking precautions to ensure the safety of our employees, manufacturing partners and customers, and are monitoring the situation closely. We are working to restore availability as soon as possible.”

Another way the coronavirus outbreak is impacting business is by reducing Chinese consumers’ demand for consumer electronics.

China is the United States’ third-largest and fastest-growing market for exports, which means that US companies are increasingly setting revenue goals that rely on Chinese residents buying their products.

Apple in particular made a whopping $52 billion in sales in the last fiscal year by selling its products (mostly iPhones) in the country. With the recent easing of tensions in the US-China trade war, analysts were anticipating that number to grow at a faster rate than it had in previous months.

But now, because of the coronavirus, that could all change. Apple temporarily closed some of its more than 40 stores in the country and is currently still operating some under limited hours.

The company said on an earnings call that there has been “very low customer traffic” in its stores.

What we can expect

Some business analysts are hoping this will be only a temporary disruption that will slow down in the coming weeks — but so far, the virus has proven to be difficult to contain and hard to predict.

The last health crisis to impact trade between China and the rest of the world was SARS in 2003. But at that time, the country wasn’t as important a player in the global economy as it is today.

The extent to which US-based tech companies are being impacted by the coronavirus demonstrates how reliant the tech industry is on China.

Why coronavirus scammers can send fake emails from real domains