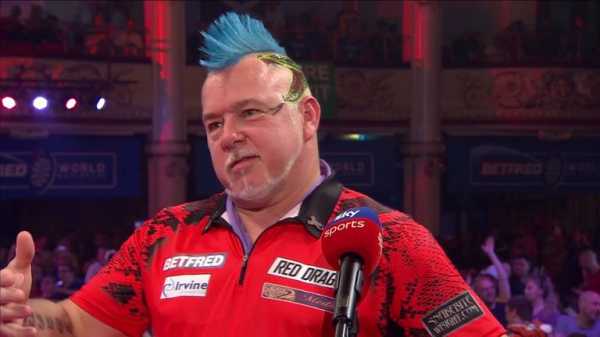 2:16 Peter Wright was full of praise for Michael Smith after dispatching ‘Bully Boy’ 16-7 to reach the last four Wayne Mardle believes Michael van Gerwen has to perform or he won’t beat Peter Wright in the World Matchplay semi-final.

Saturday night would represent the perfect setting for a Van Gerwen masterclass – capacity crowd, big stage, and a blockbuster clash in one of the sport’s premier events.

This is the type of scenario that the three-time world champion has thrived in throughout the last decade, but Sky Sports’ Mardle believes Wright will begin the contest as favourite.

“He knows that Michael van Gerwen can go out there tomorrow and absolutely run riot and rout him. He knows that, but it’s not likely, is it?” Mardle reflected.

“Peter Wright showed against Michael Smith that relentless nature that he has got. Michael van Gerwen is going to need to up his levels from first gear to seventh gear.

“He won’t outscore Peter, which is what he normally relies on. He won’t out-finish Peter because under pressure, Michael van Gerwen looks like missing more than Peter Wright now.”

‘The Polish Eagle’ flew under the radar pre-tournament given his underwhelming form on the Pro Tour, but he’s been at his relentless best to secure a spot in his first major PDC semi-final.

The seven-time PDC event winner posted 101 and 99 averages in dispatching the in-form duo of Brendan Dolan and Luke Humphries, before breezing past debutant Callan Rydz to break new ground in Blackpool.

Van den Bergh has reiterated that his debut success was no anomaly – firing in a combined total of 24 maximums to defeat Dave Chisnall and world champion Gerwyn Price.

The manner of his 16-9 victory over Price sent out a real statement. Not only did he comprehensively outplay the world No 1, he also showed composure beyond his years by refusing to be drawn into the Welshman’s histrionics.

‘The Dream Maker’ was Wright’s house guest during last year’s lockdown, and the brilliant Belgian credited Snakebite’s influence in his evolution into a major champion.

Now the pair could potentially meet in Sunday’s showpiece, which Mardle concedes is the most likely outcome.

“I don’t want to rule out Michael van Gerwen and Krzysztof Ratajski of course, but that’s the likely final, isn’t it?

“Dimitri is doing everything right under pressure, so is Peter Wright, who has not really been under the cosh because he has made life pretty comfortable for himself.

“Ratajski will definitely give Dimitri a game, and if Michael van Gerwen plays his A-game tomorrow, he wins.”

Watch the World Matchplay from the iconic Winter Gardens all the way through until Sunday, July 25. Check out daily Darts news on skysports.com/darts, our app for mobile devices and our Twitter account @skysportsdarts