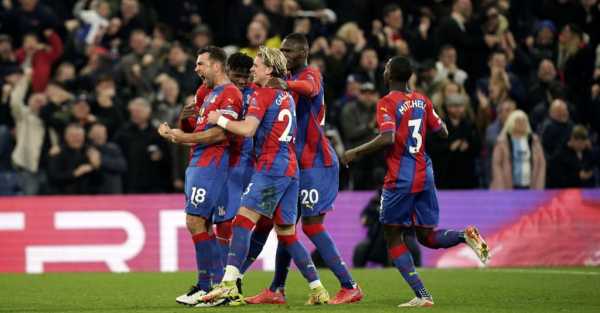 Wilfried Zaha and Conor Gallagher put talk over their international futures to one side to fire Crystal Palace to a 2-0 victory at home to Wolves with a little help from VAR.

Zaha had to refute claims he had been considering his future with Ivory Coast on Friday – after comments made by international boss Patrice Beaumelle during the week – but at his spiritual home of Selhurst Park the Eagles attacker opened the scoring to help Patrick Vieira’s men make it back-to-back wins.

VAR had to confirm the 61st-minute goal after an initial offside decision and then downgraded a Wolves penalty to a free-kick before Gallagher, who had to settle for another England Under-21 call-up rather than a place in the senior squad, saw a deflected shot find the net to extend the hosts’ unbeaten run to six games.

Vieira made one change from the win at Manchester City, with Christian Benteke recalled in place of Jordan Ayew, while the visitors stuck with the side that earned a fourth victory in five league games over Everton on Monday.

Both teams have undergone a transformation in styles, with their respective new managers adopting a more possession-based game compared to their predecessors, and it was Palace who dictated proceeding early on.

The first genuine opportunity was created after 15 minutes when Odsonne Edouard combined initially with Benteke and then exchanged passes with Zaha, but his effort from inside the area was straight at Jose Sa.

Gallagher caught the Wolves goalkeeper following up and further stoppages during the rest of the opening 45 minutes contributed to a disjointed first half.

Set-pieces provided openings for either side, with Edouard heading over before Raul Jimenez beat his own team-mate Conor Coady to Joao Moutinho’s free kick and his weak effort was straight at Vicente Guaita.

Palace upped the ante after the restart, with Zaha and Edouard embarking on dangerous runs, while Benteke tested Sa with a header from Gallagher’s corner.

It felt like a matter of time before the deadlock was broken and the Eagles went ahead in the 61st minute, but only after VAR intervened.

James McArthur slipped Zaha through on goal with a perfectly-weighted pass and the Ivory Coast international slotted into the corner from a tight angle.

Assistant referee Peter Kirkup immediately raised his flag to signal for offside, but VAR overruled the decision to give Zaha a fourth goal of the campaign and spark a second round of celebrations at Selhurst Park.

The home faithful were lauding technology again not long after when Wolves were denied a spot-kick after Joel Ward brought down Rayan Ait-Nouri in the 68th minute.

Referee Scott awarded a penalty but another VAR check saw a free-kick given instead, with the incident taking place on the edge of the area.

Wolves manager Bruno Lage had introduced Daniel Podence and Adama Traore by this point, but it failed to have the desired effect, with Palace doubling their lead with 12 minutes left.

Gallagher was again first to a loose ball and, after being given too much time by the away defence, the Chelsea loanee saw his effort deflect off Coady to leave Sa wrong-footed and make the score 2-0.

Palace goalkeeper Guaita had to save Joao Moutinho’s low free-kick late on to ensure another clean sheet, with the hosts moving up to ninth in the table.