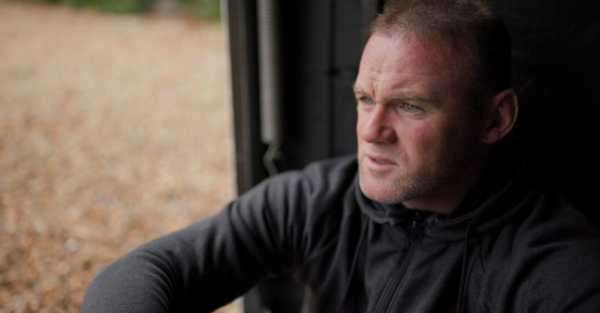 Wayne Rooney has laid bare the issues with anger and mental health that punctuated his career.

Nobody has scored more goals for Manchester United or England, yet there was a feeling of what could have been after the 36-year-old retired to take the managerial post at Derby this time last year.

Rooney burst onto the scene in stunning fashion at Euro 2004 and swiftly became one of the world’s best players, with the generational talent now opening up on how he did that whilst dealing with internal strife.

The forward even used to lock himself at home for days at a time drinking to help numb the pain as he dealt with becoming an overnight star in the public gaze.

“There was a period in my career, for a long period of my career, I was suffering inside,” Rooney told the PA news agency. “I was finding ways to deal with that. A lot of it ended up in drinking.

“It’s not something you do, where now it’s a lot easier to actually do that, which is good because obviously people are recognising the mental health issue and talking about it and trying to catch it early, especially with some of the young lads who are struggling with that.”

Rooney said the issues were a mixture of everything and built up to the point where he saw a psychologist for a short period of time.

Asked if there was better support available he could have had an even better career, the Everton youth product said: “Yeah, possibly. You never know. You always look in hindsight.

“Actually when I learned to deal with them, that went away because you’re obviously putting yourself in a better frame of mind as well.

“So, I don’t know. I don’t know whether it would have seen me become a better player, play for longer, whatever that situation is.

“But it was part of my life, a part of my career. Obviously I’m happy with my career but then there’s moments where I struggled quite badly, actually.”

Rooney says the principals he used to come through those issues have stuck with him and helped quell his anger issues.

His fighting spirit is a common theme throughout the new Amazon Prime Video film – released on Friday – about his career and helped in many ways, but it also led him to overstep the mark, as Chelsea’s John Terry discovered.

“We knew if Chelsea won then they had won the league that day,” he said of the April 2006 trip to Stamford Bridge, where United would go onto lose 3-0.

“Until my last game for Derby, I always wore the old plastic studs with the metal tip.

“For that game I changed them to big, long metal ones – the maximum length you could have because I wanted to try and hurt someone, try and injure someone.

“I knew they were going to win that game. You could feel they were a better team at the time so I changed my studs.

“The studs were legal but thinking if there’s a challenge there I knew I’d want to go in for it properly, basically. I did actually.

“John Terry left the stadium on crutches. I left a hole in his foot and then I signed my shirt to him after the game… and a few weeks later I sent it to him and asked for my stud back.

“If you look back when they were celebrating, JT’s got his crutches from that tackle.”

In the end, the rage-fuelled decision to change boots at Stamford Bridge proved costly.

During a late challenge with Paulo Ferreira, Rooney’s front studs got caught in the turf and broke three metatarsals just weeks before the 2006 World Cup.

“Looking back, I should never have gone to that World Cup,” said Rooney, who blames himself for the injury.

“It was my first World Cup I would have been going to. Obviously I broke my foot not long before it and still to this day I feel terrible for Jermain Defoe.

“He went out, (did) all the training camp and then literally I come in, he left.

“And that was hard as well to take because I literally took his spot at the World Cup and took his dream away of going to the World Cup.

“But I wasn’t ready, I was never fit to play in that tournament and I think that showed in performances.”

Rooney’s tournament would eventually end with his anger flaring up again, receiving a red card in the eventual quarter-final defeat to Portugal.

That World Cup exit still appears to weigh heavy on Rooney now, which perhaps should not surprise given his self-belief brought internal pressure.

“The pressure (weighed heavy), yeah,” he said. “I’d go into tournaments thinking if England are to win this tournament it’s because I’ve won them it. I always went into the tournament like that.

“If I perform well, we win the tournament. I always had that belief.

“But on the flip side I used to think if I don’t, we won’t win it. England need me to perform well for us to win the tournament.

“That was a lot of pressure for me to deal with.

“I tried to hide it a lot throughout the years and tried to take that pressure off my team-mates almost to not show that but deep down that’s what was always in my head.

“I was always thinking, so I think a lot of the times you see mistakes on the pitch or like a red card, whatever, bad performance, that’s probably from me just holding everything in and trying to do too much at times.”

This openness and honesty is seen throughout the new documentary ‘Rooney’, which offers a fascinating insight into his life on and off the field at a time when he is impressively managing cash-strapped Derby.

“I love football,” he said. “I always knew I wanted to stay in football

“I always felt I’d be a good manager so to do it now it’s obviously different to what I thought it’d be.

“I never thought I’d be managing in administration and dealing with what I’m deal with but it’s all an experience.

“I’ve always been a fighter, been through difficult moments. That’s what I’m in now. I’m in a fight, it’s a challenge but I truly believe that we will come out the other side.”

:: Rooney is available to watch on Amazon Prime Video from Friday 11th February