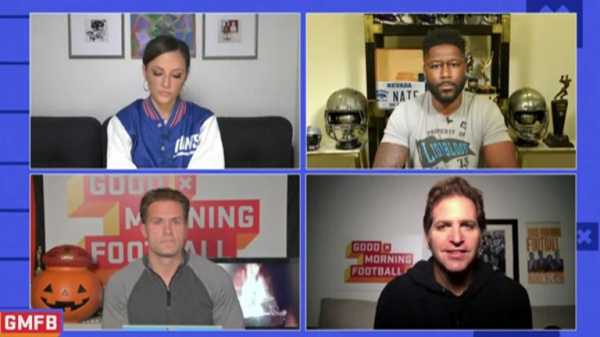 3:50 The Good Morning Football crew look at the contrasting fortunes of Tom Brady and Cam Newton as Brady’s Bucs hammered the Raiders, while his former team lost their third straight

In the latest installment of Mission Impossible, Cruise fights Henry Cavill on the edge of a cliff, at one point hanging off the edge in a helicopter he just crashed, before removing the key from a detonator threatening to set off two nuclear bombs.

In the latest installment of what could be Brady’s thrilling finale, he rolled back the days to his time with Wes Welker as he expertly navigated the pocket before dropping an inch-perfect pass into the path of Scotty Miller at the back corner of the end zone for a 33-yard touchdown.

‘That used to be me,’ you could hear a distant Julian Edelman utter, with five-foot-10 little-known Miller, a 2019 sixth-round pick out of Bowling Green, having emerged Brady’s new undersized go-to target in Tampa.

Poor Scotty was ignored amid excitement over the weapons awaiting Brady in Tampa upon his arrival. For him to lead the team with 365 receiving yards from a joint-second most 22 catches is a sign of his quarterback making this offense his own. 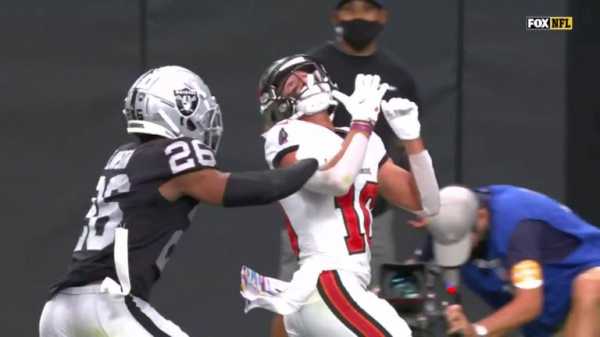 Brady’s 18 touchdown passes and four interceptions tie for his third-best ever after seven games, while his 15-1 touchdown-interception ration since Week Three ranks first in the NFL.

It should not come as a shock that it has taken him some time to settle down in a new environment. When you spend 20 years playing to the tune of one team, particularly with the Patriots’ way of doing things, time was always needed, even more so when considering delays to training camp and the absence of preseason.

A lot of the early concerns stemmed primarily from the opening game defeat to the New Orleans Saints when Brady was intercepted twice, Janoris Jenkins returning one of those for a touchdown.

The Bucs offense was out of sync, a banged-up Mike Evans was barely involved, rookie left tackle Tristan Wirfs was tasked with a tough debut assignment and Brady was working with head coach Bruce Arians and offensive coordinator Byron Leftwich in a live situation for the first time.

Brady went on to throw another interception against the Carolina Panthers in Week Two, followed by a fourth of the season in the comeback win over the Los Angeles Chargers, during which he became the oldest quarterback to throw for five touchdowns in a single game. 0:42 Michael Davis intercepts a Brady pass and returns it for a 78 yard touchdown in the Los Angeles Chargers’ defeat to the Bucs

Injuries have not helped either. Pro Bowl wide receiver Chris Godwin will miss Monday’s clash with the New York Giants with a fractured finger having missed three games earlier this year due to a concussion and hamstring issue, Evans has not been fully healthy at all times and tight end O.J. Howard is out for the year with a torn Achilles,

Of Cruise’s crack teams down the years, his most recent of Simon Pegg, Rebecca Ferguson and Ving Rhames is up there with his most talented. The same can be said for Brady, with Antonio Brown still to come – we just have not seen it at full strength just yet.

The emergence of Rob Gronkowski in recent weeks has been a major plus point after his old friend had spent the opening month brushing off the cobwebs upon his return to the NFL.

The win over the Raiders saw Brady and Gronk connect for their 92nd touchdown, tying for second most in NFL history with Steve Young and Jerry Rice behind only Peyton Manning and Marvin Harrison.

Having hauled in just 12 catches in his first five games as a Buccaneer, Gronkowski has 10 receptions for 140 yards and two touchdowns across his last two outings. That includes a sideline catch on a beautifully-weighted pass between two defenders in the win against the Green Bay Packers.

“I think Byron (Leftwich) has done a great job of having him ready to play, him seeing the coverages and where we want to place the ball.”

Arians made a point of noting that Leftwich takes note of Brady’s preferences in view of adding them to the offense, which again alludes to a relationship that is only going to strengthen and garner more results on the field as the season progresses.

In leading the NFL’s No 3 ranked scoring offense, Brady has shunned suggestions that he has lost his arm strength. It’s not the same, of course it is not, he’s a 20-year vet in his 40s? But he can still sling it.

Brady’s deep pass rate is ranked fourth in the NFL this season, while he has thrown a third-most 505 yards on deep passes. His deep pass rate (14.6) is the highest it has ever been in the Next Gen States era since 2016 and his passer rating when targeting go routes (137.9) is fourth-highest in the league.

According to Pro Football Reference, Brady’s 2,289 intended air yards are also fourth-most in 2020.

His efforts were recognised this week with the NFC Offensive Player of the Month award for October after he had led all quarterbacks with 12 touchdown passes and 13 scores in total, helping the Bucs average a second-most 35 points per game. 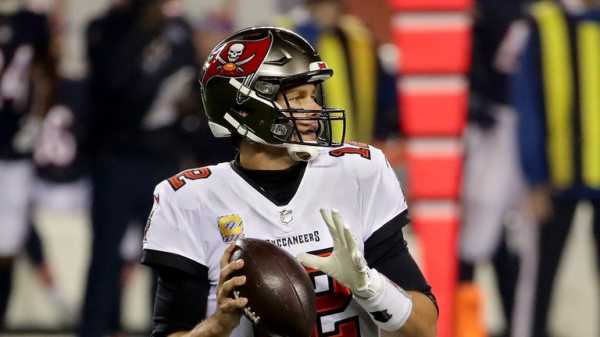 0:26 Tom Brady found Mike Evans for the touchdown as the Tampa Bay Buccaneers took an early lead in their NFL clash against the Chicago Bears

Brady will meet a familiar face on Monday when he comes up against Giants head coach Joe Judge, who was on the Patriots coaching staff from 2012 up until his departure earlier this year.

For Judge, who is five years younger than Brady at 38, his former six-time Super Bowl-winning colleague’s recent form is no surprise.

“He was a ton of fun to be around,” he said. You really got to see one of the great competitors on a daily basis of not only how he performed, but more importantly how he prepared.

“I think that’s some of the things that get overlooked. It’s not accidental this guy’s playing this late in his timeline of being 40-plus years old and still playing at this high level.”

Todd Bowles’ exceptional defense are equally deserving of a nod, ranking third overall and first against the run as well as recording a second-most 25 sacks. And as he was in the latter stages of his Patriots career, Brady has been complemented well by a capable run game led by Ronald Jones and Leonard Fournette. 1:03 Tampa Bay’s Jamel Dean came away with just the third pick six of Aaron Rodgers’ career in the Bucs’ victory against the Packers

Right now, the Bucs look like one of the NFL’s juggernauts, stacked with talent on both sides of the ball and, crucially, led by a quarterback threatening to put together one of his best seasons.

“We’re 5-2. I don’t think anything has been perfect out there,” Brady said. “We’re fighting and clawing for every win. I think we’re improving every week, which has really been fun for me to see dating back to the offseason when we started talking about football.”

Watch the Buccaneers @ Giants live on Sky Sports NFL from 1:15am in the early hours of Tuesday morning