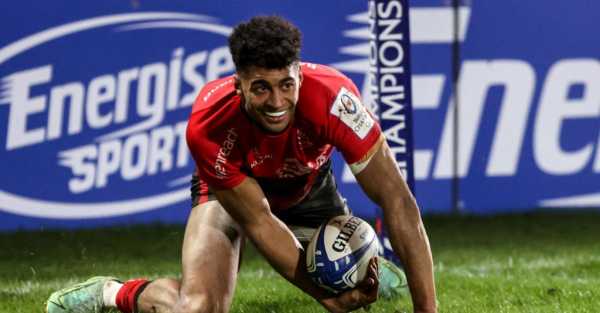 Ulster have beaten Clermont in a pulsating affair at the Kingspan stadium in Belfast.

Their win makes it four wins from four in the pool stages as they end up finishing second in Pool A.

In what was a back and forth game, Ulster ended up coming out on top 34-31.

Earlier, Leinster also qualified for the last 16 of the Heineken Champions Cup with a convincing bonus point win over Bath.

They beat them 64-7 at The Rec after a truly commanding performance where they scored 10 tries.

Jimmy O’Brien was named star of the match after getting over the line four times in what was a brilliant performance from the winger.

Manchester City’s record-breaking Premier League winning run has been halted at 12 after they were held to a 1-1 draw at Southampton this evening,

The league leaders went behind to a Kyle Walker-Peters goal early on and needed an Aymeric Laporte strike to avoid a rare defeat.

Manchester United jumped up to fourth after a stunning injury-time winner from Marcus Rashford gave them a 1-nil win over West Ham.

Rashford tapped in at the back post to secure the points and leave Hammers boss David Moyes fuming.

The other afternoon games finished as follows…

Former Irish cap Conor Sammon with the Alloa goal there, while Liam Scales played a starring role for Celtic.

The glasgow giants have been drawn at home to Raith Rovers in the next round.

Seamus Power has jumped right into contention at the American Express Championship in California.

The Waterford lad was two shots back with a half-dozen holes to play, giving himself a chance for a first PGA Tour win.

Shane Lowry, meanwhile, is one shot off the lead after three rounds at the Abu Dhabi Championship.

The Offaly man had five birdies in a bogey-free round of 67 to move to 10-under-par.

Thomas Pieters is also 10-under going into the final day while Scott Jamieson birdied the last to take a one-shot lead at 11-under.

US Open champion Daniil Medvedev is safely through to the last-16 at the Australian Open tennis.

There were wins for Simona Halep, Iga Swiatek and second seed Aryna Sabalenka in the women’s third round.

GAA Central Council have endorsed the ‘Green Proposal’ for reform of the All-Ireland senior football championship, meaning the plan will now go forward to Congress next month.

On the pitch, Jack O’Connor has won the first piece silverware of his third stint as Kerry football manager.

The Kingdom have beaten Cork 2-17 to 11 points in the McGrath Cup final.

Dublin overcame Laois in the O’Byrne Cup decider at Dr Cullen Park on a final scoreline of Dublin 1-13, Laois 11 points.

And they’ve just thrown-in in Omagh for the McKenna Cup final between Monaghan and Donegal.

Wexford are into the final of the Walsh Cup after an entertaining 2-25 to 2-25 draw with Kilkenny at Wexford Park.

The hosts advancing on the merit of their better score difference.

While Galway had six points to spare over Antrim in the other semi, they took that one 1-23 to 1-17 in Darver.

The Kerry club beat Cork side Neptune 88-75 to take the Pat Duffy Cup.

The NFL’s playoffs enter the divisional round with two games tonight.

AFC top seeds, the Tennessee Titans, will hope to continue their strong home record this season when they host the Cincinnati Bengals at 9.30pm.

Green Bay, the current favourites to win this year’s SuperBowl, will take on the San Francisco 49ers at Lambeau Field in the early hours of Sunday morning.

Two of the favourites for the Queen Mother Champion Chase did battle at Ascot today.

Nicky Henderson’s Shishkin got the better of Willie Mullins’ Energumene in a classic renewal of the Clarence House Chase.