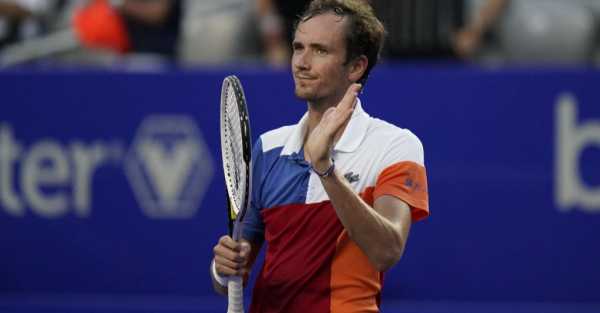 Daniil Medvedev ended a “rollercoaster day” by setting up an Australian Open final rematch with Rafael Nadal at the Mexican Open in Acapulco.

Medvedev began Thursday by watching the news from his home country of Russia as the invasion of Ukraine began and then learned he will be world number one next week after Novak Djokovic was beaten by Jiri Vesely in Dubai.

Medvedev managed to keep his focus on the court to beat Yoshihito Nishioka of Japan 6-2 6-3 to earn another crack at Nadal, who he lost an agonising five-set battle to in the final in Melbourne last month.

Regarding the news from Ukraine, Medvedev echoed his countryman Andrey Rublev in voicing his support for peace.

The 26-year-old said at a press conference: “Watching the news from home, waking up here in Mexico, was not easy.

“By being a tennis player, I want to promote peace all over the world. We play in so many different countries. I’ve been in so many countries as a junior and as a pro. It’s just not easy to hear all this news. I’m all for peace.

“In these moments, you understand that tennis sometimes is not that important. It was not easy to play and I’m happy that I managed to win the match, but it was a bit of a rollercoaster day for me.”

Medvedev began the week knowing that winning the title would be enough to overtake Djokovic at the top of the rankings, but the Serbian could not take it all the way, ending his return to the match court by suffering a shock loss to a qualifier ranked outside the top 100.

Medvedev was only aware what the result meant for him when he began to receive congratulatory messages.

“It’s not easy to play a match when you get this news during the day,” he said. “The first goal for me was to still win today because I’m here to try to win every match I play. But it’s definitely some great news.”

Nadal extended his winning start to the season by defeating Tommy Paul 6-0 7-6 (5) for his 13th consecutive victory.

On his rematch with Medvedev, the Spaniard said: “Everybody knows how difficult the final was in Australia. Tomorrow is going to be another battle. I know he’s playing well, plenty of confidence. I am excited to play that match.”

The other semi-final will pit third seed Stefanos Tsitsipas against British number one Cameron Norrie, who has backed up his title in Delray Beach last week with another excellent run.

The sixth seed was in relentless form against German qualifier Peter Gojowczyk, winning 6-1 6-0.

“I used the court to my advantage,” said Norrie. “Very slow, very bouncy conditions. I just made it physical points and made him play one more ball.”

Djokovic, meanwhile, is set for another spell away from the courts, with the unvaccinated 34-year-old currently unable to enter the United States to play in Indian Wells and Miami over the next month.

“I need the match play,” said Djokovic. “I didn’t have many matches at all the last few months. I’ll have to follow the situation, see how it goes. Wherever I get an opportunity to play, I will. Hopefully that will be soon.”