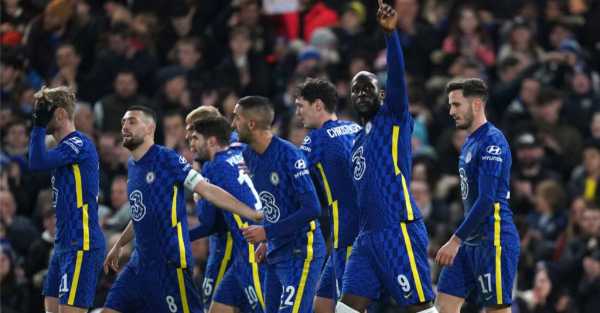 Returning Romelu Lukaku struck as Chelsea cruised to a comfortable victory against non-league Chesterfield in a 5-1 FA Cup third-round canter at Stamford Bridge.

The Champions League holders flexed all their muscles of quality and depth to nullify any prospect of a cup upset.

The 91 league places between the two sides told throughout, with Chelsea still able to make seven changes despite a raft of injuries and Covid-19 absentees.

Last term’s beaten finalists, Chelsea would have been frustrated to surrender their clean sheet at the death, especially with Marcus Bettinelli making his debut in goal.

But this encounter was only ever one to negotiate safely for boss Thomas Tuchel and Chelsea.

From the moment Lukaku whipped a first-time effort from a corner over the bar, Chelsea’s dominance was rubber-stamped.

Werner tapped the Blues into a fifth-minute lead, teenager Hall the catalyst for a fast break where Ziyech’s half-saved shot fell straight to Chelsea’s German forward with an open goal ahead.

Werner could have doubled his tally had he been able to react quick enough to another Ziyech shot parried that flashed across goal.

Hudson-Odoi’s 20-yard strike under no pressure quickly put Chelsea 2-0 up however, with the left wing-back taking aim and hitting his desired spot in relaxed fashion.

Lukaku tapped in Hall’s smart cross to put the Blues 3-0 up inside 20 minutes, with the young defender losing then regaining the ball before laying on an astute assist.

Another deep Ziyech corner begged for a Lukaku howitzer, but this time on the volley the Belgium hitman fired another first-time effort wide.

Werner’s low cutback teed up Lukaku for a third time, and again he pulled his effort wide of a post.

Ruben Loftus-Cheek replaced Kovacic at the break, with Havertz coming on for Lukaku.

The Morocco forward made no mistake from the spot however, blasting home a penalty for the Blues’ fifth.

Calvin Miller’s rustic challenge on Pulisic could only end one way, and Ziyech opted for power to fire Chelsea further ahead.

Havertz thought he had slid home a sixth, only to be pulled back for offside.

Asante ensured Chesterfield had the last word however, tapping in after Kabongo Tshimanga had driven in on goal with Bettinelli parrying his shot.