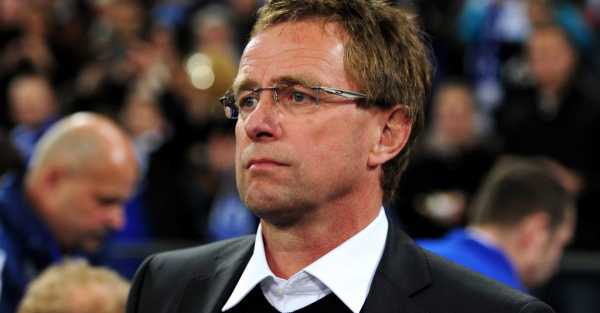 When Ralf Rangnick begins to analyse recent Manchester United matches, Cristiano Ronaldo’s opening goal at Villarreal will bring a smile to his face.

The high pressing of Fred to create the opportunity is a hallmark of teams coached by the German and there was a further element of a higher press in United’s draw at Chelsea – Michael Carrick’s second game in caretaker charge.

But Rangnick will find very few other examples of the Gegenpressing tactic he is widely credited for in other clips he watches of his new side.

In many ways Rangnick is partly responsible for Ole Gunnar Solskjaer’s demise, albeit inadvertently.

He has helped shape the football of two of United’s current biggest rivals in Liverpool and Chelsea, which perhaps contributed towards the Norwegian this season attempting to move away from a counter-attacking style that had brought moderate success during his tenure.

Both Jurgen Klopp and Thomas Tuchel credit the 63-year-old Rangnick for inspiring their own versions of Gegenpressing, a high-octane ball-recovery tactic he has implemented with his teams since the 1980s.

With Chelsea and Liverpool looking ominously ahead of United, it will be the Red Devils’ new interim boss who will be tasked with not only trying to bridge the gap but to oversee a change of style during the rest of the campaign and beyond in his consultancy role.

The Backnang-born coach has long had an affiliation with England after studying at the University of Sussex, where he used his time in the country to play non-league football for Southwick.

It was shortly after this period that Rangnick’s hopes of becoming a professional would end when he moved on from Stuttgart and turned his focus to management with his first role in the dugout at FC Viktoria Backnang.

As player-coach of his hometown club, a chance meeting with Dynamo Kiev in 1983 saw the famed Gegenpressing first formed.

Rangnick recounted: “Dynamo Kiev, the team of legendary coach Valeriy Lobanovskyi, were staying in a nearby training centre and needed easy opposition for a friendly.

“A few minutes in, when the ball had gone out for a throw-in, I had to stop and count their players. Did they have 13 or 14 men on the pitch?

“I had played against top teams before – we always lost against them, of course – but they had at least given you the occasional moment of breathing space. Kiev were the first team I had ever come up against who systematically pressed the ball.

“That was my football epiphany. I understood that there was a different way of playing.”

From there Rangnick’s philosophy was shaped and it would eventually take him back to Stuttgart, where he started the 1990s in charge of their under-19s before by the end of the decade becoming coach of the first team.

After a mixed time with the Bundesliga club, he dropped down a division and earned promotion back to the top flight in his first campaign at Hannover, before a spell at Schalke brought more success.

While Rangnick was sacked by Schalke, it was still a surprise to see the tactician drop down to the third tier of German football with Hoffenheim, but it was not long before he was dining at the top table again.

Back-to-back promotions with Hoffenheim contributed towards Schalke bringing back their old boss, but he stepped down within 12 months citing a lack of energy to develop the team and club.

After a coaching career charting almost 30 years, Rangnick accepted a new challenge in 2012 when he took on the role of director of football at both Red Bull Salzburg and RB Leipzig.

Over the next seven years, the two clubs would enjoy enormous success with the “three Cs” key.

Concept, competence and capital are the fundamentals needed for “club-building” in the eyes of Rangnick, which in essence focuses on implementing a specific DNA and finding the best people for each job.

“Capital is a limited-success factor. Alone, it is far from enough. What’s more, concept and competence, if you use them well, will generate capital,” Rangnick said.

“The three Cs go together, hand in hand – and the chances of real success increase if all three Cs come together.”

It is that final aspect that may be the key part of Rangnick’s overall job at Old Trafford, helping one of the richest clubs in world football get back to being a trophy-winning machine.

A lack of playing style cost Solskjaer and an argument could be made he was an example of a lack of competence at the club, but there will be no confusion over the type of football the new United manager wants – even if it is for only a season.

Rangnick, who was last in the dugout back in the 2018-19 term when he took charge of Leipzig for the campaign, will know what to expect when he takes on Klopp and Tuchel, with the latter a player under his tutelage at Ulm. On Klopp’s part, he previously called Rangnick “one of the best, if not the best” German coach.

His challenge, initially for the next six months, will be closing the gap to his proteges, as well as Manchester City, and if achieved it will be by following his usual mantra.

“My job – the job – is to improve players,” Rangnick has previously said and given some of United’s recent results, there is space for improvement and it will all begin with pressing.