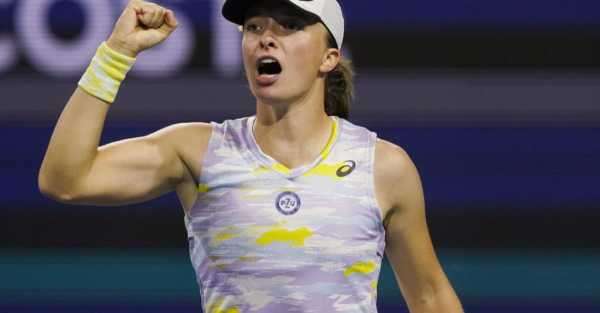 Poland’s Iga Swiatek will take over as world number one following a 6-2 6-0 win over Viktorija Golubic in the second round of the Miami Open.

The 20-year-old – who becomes the first Polish player to achieve the feat – was only elevated to world number two after winning the BNP Paribas Open at Indian Wells last week.

She will officially become the youngest player to make her number one debut since Caroline Wozniacki, who was 216 days younger, in 2010, when the new rankings are published on April 4.

Swiatek is on a career-best 12-match winning streak and has a tour-high 21 wins this year, with WTA 1000 titles in Doha and Indian Wells.

“I’m pretty sure that tomorrow the sun will shine exactly the same way as today but for now…it feels surreal. No.1!!” Swiatek wrote on Twitter following her win.

Her number one ranking will be recorded officially once the tournament is over and Barty is removed. The 25-year-old Australian announced her shock retirement on Wednesday.

Swiatek told a press conference: “The thing is, I never really imagined that moment because, truth to be told, I was working day-by-day and playing tennis well. But I never had the strong belief that it can actually happen. So, it’s even more surreal for me.

“I loved every moment of it. It doesn’t matter for me if there were fireworks. The crowd was really supportive, they were really excited. I’m just soaking everything in because I didn’t have any expectations.”

The Pole is the 28th woman to hold the number one ranking since the computerised system was introduced in November 1975.

Earlier on Friday, Czech teenager Linda Fruhvirtova secured her place in the third round of the Miami Open after beating world number 24 Elise Mertens.

The teenager hailed this tournament as “unbelievable”, following her surprise victory.

“Well, I mean, it’s definitely one of my best tournaments so far. I think the best one. I never played against top-25 player, and, yeah, it’s unbelievable,” Fruhvirtova said.

“I still can’t believe it. But I’m so happy I got the win here. I worked really hard for this, and I’m enjoying it.”

Fourth seeded Sakkari won the first set, only for the Brazilian to fight back, winning the next two to take her place in the third round.

Coco Gauff came through in straight sets against Qiang Wang.

Gauff said after the match: “Obviously I was super motivated today to get the win. I just kind of approached it just playing free.

“I feel like playing at a home crowd you either can get nervous playing in front of your family, friends, or embrace it, and today I think I embraced it.”