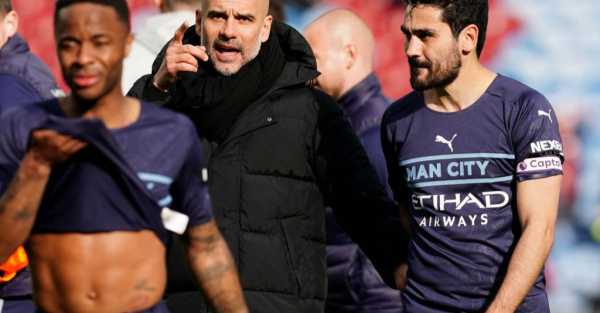 Pep Guardiola admitted he did not know what to expect from his Manchester City side going into Saturday’s 2-0 win over Burnley that ensured they ended the day back at the top of the Premier League table.

The City players watched on their coach ride up the M66 as Liverpool beat Watford 2-0 to temporarily reach the summit, but responded with first-half goals from Kevin De Bruyne and Ilkay Gundogan to retain their one-point advantage.

City have an utterly one-sided record against the Clarets in recent seasons, winning the last 10 meetings by an aggregate score of 34 to one, but Guardiola said he was wary of this fixture on the back of the international break – in some ways more so than next week’s crunch meeting with Liverpool.

“I was a little bit concerned about this game,” he said. “Honestly, with all respect, more than the Liverpool game. I know against Liverpool how our people and our players will be.

“But here after the international break, to come back, just one training session together. Riyad (Mahrez) is sad after (missing World Cup qualification). Riyad, if he qualified, maybe he would have played.

“Ten days off, you never know. That is why I am more than pleased for the victory and to continue the fight against Liverpool.”

Mahrez may face a fight to get back into the side given the form of Raheem Sterling, who set up both goals and would have had a hat-trick of assists had substitute Gabriel Jesus not fired over early in the second half, also having a chance to score himself late in the first half.

“We have been together six seasons and Raheem has done six seasons of incredible performances, incredible seasons complete in terms of goals and assists,” Guardiola said.

“His decision-making and control, in the final third, when to take one touch more, he was perfect and he is playing good. You cannot expect all the time, 10, 10, 10. There are highs and lows but his lows are not much.”

Atletico and Diego Simeone ended Guardiola’s final chance of winning the Champions League during his three seasons with Bayern Munich in 2016, the third straight season in which they lost in the semi-finals of the competition.

“He is a master for knockout stages,” Guardiola said of Simeone. “There are many games during the game and he handles perfectly these different games. Tomorrow we start to talk about the game.”

The two legs of the quarter-final will both be followed by fixtures against Liverpool, with the FA Cup semi-final to come after next weekend’s league meeting at the Etihad. It is a run which can make or break City’s season as they remain in the hunt for a treble.

“After six seasons, win, win, winning, still we are there, in the last stages of the season, fighting for the title,” Guardiola said.

“That is why we are a big club. With a lot of money, yes I know that but it is not just that, otherwise we do not five seasons every season being there fighting for the titles.

“I have said many times, you lose (a game), you lose the competition. The (players) know it, they feel it. I’m not there but I think our opponents feel it too.”