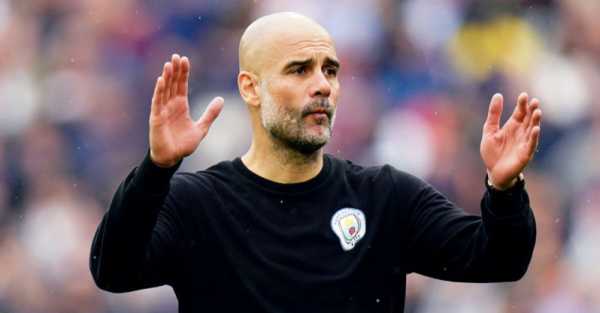 Pep Guardiola has urged his Manchester City players to ignore the pressure of the title race and treat Sunday’s decisive final game like any other.

Yet any slip-up could open the door for Liverpool, who trail by just one point, to leapfrog them at the last moment.

“It’s just a football game, just think about what you have to do to win against Aston Villa. If you think about it being one more title or one less title – yes this kind of thing is important, everyone knows it – but it’s a football game.

“Do they play with (Ollie) Watkins or (Danny) Ings and Watkins? Does Douglas Luiz play as a holding midfielder or in a three? Will (John) McGinn move outside or not?

While City will be the favourites, Guardiola feels it helps his side that they are not historically burdened by a weight of expectation.

He said: “As a club we have not been here many times, so once we are here, should we be anxious or nervous? No, no way.

“Go there and try to enjoy the game, enjoy the moments. We will suffer in moments but if we concede a goal it is, ‘Come on, let’s go, try again, try again’.

“From my little experience this is the best way to approach these situations.”

Much has been made of the game’s Steven Gerrard sub-plot, with the Villa manager now having the chance to finally deliver a league title for Liverpool having never secured one during his glittering Anfield playing career.

Gerrard himself has played down the significance of his personal associations and Guardiola is not sure they will make much difference either.

City are boosted by the potential return of defenders Kyle Walker and John Stones, who have made quicker-than-expected recoveries from ankle and thigh injuries respectively.