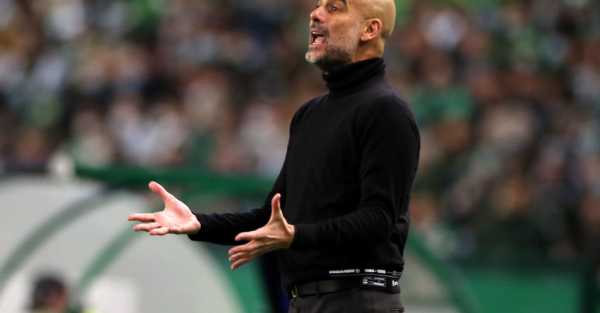 City all but secured a place in the quarter-finals of the Champions League as they ran riot in the first leg of their last-16 tie at the Jose Arvelade Stadium on Tuesday.

Yet in a warning to the rest of the competition, manager Guardiola demanded more of his players after the game, admitting he was far happier with the scoreline than the performance.

Guardiola said: “I am absolutely more than delighted. We know how difficult it is. We were so clinical – when we arrived at their box we scored a goal.

“We defended well and got an incredible result but we have a duty as a manager and team to analyse how we performed, not just the result.

“We have to take care of the ball better. One of the rules I have is when you have the ball try to pass to someone in the same T-shirt. Today we lost the ball many times.

“The difference was that we were so clinical. Then it is difficult for the opponents and we have confidence. It is a dream, a perfect result, so good for the second leg but we can do better.”

Former Benfica player Bernardo Silva scored twice for City on a happy return to his home city, including a stunning half-volley to make the score 2-0.

“He scored one of the best goals I’ve seen for the technique, for everything,” said Guardiola. “Hopefully it can give him even more confidence.

“He’s in his home town, he loves his home country. He was a Benfica player and supporter so it’s special for him.”

Sporting coach Ruben Amorim admitted City had been too strong.

He said: “We knew it would be a difficult game, they are probably the best team in the world.

“After the third goal it became suffering, it was no longer football. They have more years’ experience and a better coach and they have played more minutes than us.

“We couldn’t find a solution. We were powerless and I have to apologise to my players.”