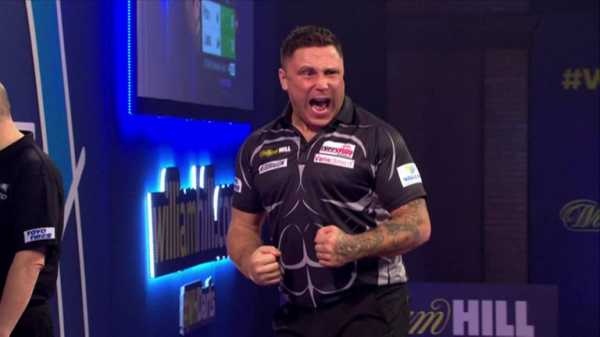 Gerwyn Price came through a gruelling contest with fellow Welshman Jamie Lewis, to begin his quest for a maiden World Championship title with a 3-2 second-round victory.

Price has enjoyed the year of his darting life, with more titles than anyone else across the truncated season, but has made no secret the Sid Waddell Trophy is the one he wants and he remains on track after a barrage of big finishes eventually got the job done.

Michael van Gerwen and Peter Wright had already recorded 3-1 wins to start the tournament but fellow no 1 contender Price was forced to come from behind and come through a final-set decider on his way to the last 32.

“It’s completely different without the crowd, I know they get on my back a lot, but it gives me that energy and gets me going,” Price said afterwards.

“Sometimes, when you can’t get going you need that crowd behind you to try and push you on a little bit and it didn’t happen tonight.

“I’ve watched most of the matches on my phone or on TV. At a couple of the other tournaments you can hear the music in the background a little bit more…. Turn it up a little bit!!! 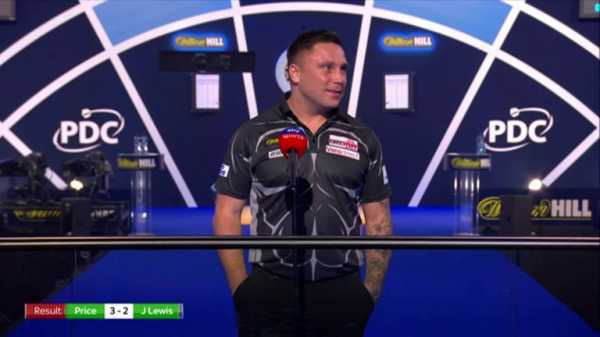 2:00 Gerwyn Price said he misses the energy of the crowd despite them getting on his back, after beating Jamie Lewis 3-2 in the Worlds

Lewis, a 2018 semi-finalist, seized the early initiative to raise hopes of the first seismic shock at this year’s tournament – but the Iceman cranked up the power and four timely 100+ finishes eventually did for his opponent. 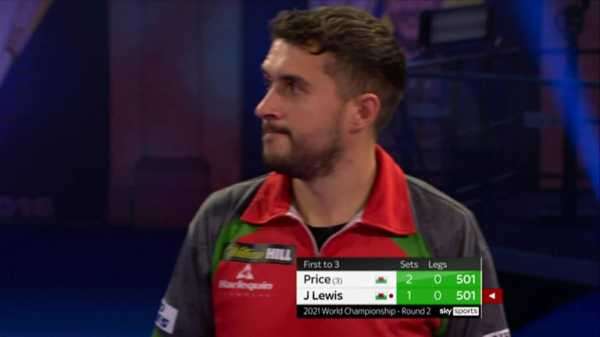 0:24 Gerwyn Price took the third set against Jamie Lewis with a 160 checkout

With Lewis poised on 42, Price upped the ante with a 104 finish as he won three of the next four legs to claim the second set – a sparkling 160 checkout sealing a 2-1 lead. Lewis stormed back to average 104 and sweep all three legs in the fourth for a level contest, before he wilted when he needed to stay cool.

Poised to win the opening leg of the fifth, Lewis managed to hit treble 16 and Price nipped in to mop up 72, before following up with a brilliant 116 to punish three missed darts from his opponent.

Price claimed the final leg in routine fashion to seal a date with Brendan Dolan or Edward Foulkes and stay on course to add the sport’s biggest title to the World Grand Prix, World Cup, and World Series of Darts Finals titles he has won this year. 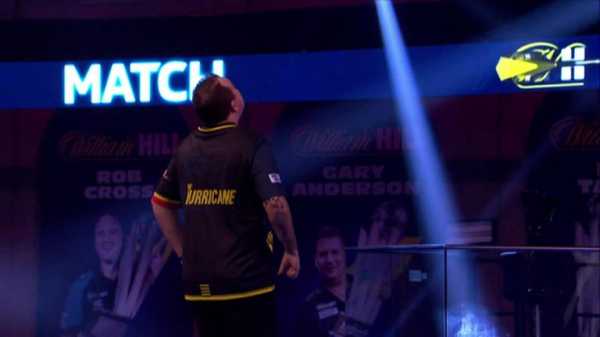 1:11 A look back at the action from Day 7 of the World Darts Championship.

Finishing proved to be the difference between Kim Huybrechts and Ian White, with the Belgian booking his place in the third round for the fourth time in the last five years. 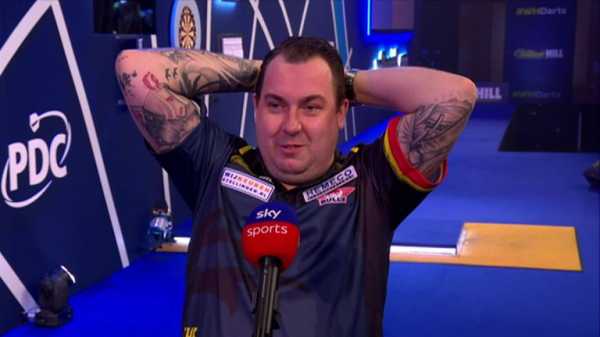 2:40 Kim Huybrechts did not hide his happiness after defeating Ian White in the second round

The pair served up a thrilling contest that featured 12 maximum 180s and both men averaging more than 100, but while White missed 24 darts at double, Huybrechts missed just 10 to cross the finish line with a 3-1.

The story of the match

White has risen into the world’s top 10 on the back of his remarkable consistency on the floor but defeat on Monday night means it is four successive second-round exits for the 50-year-old.

Huybrechts started fast to forge an early lead in the opening set but White, having missed his first seven darts at the outer ring, turned his attention to the bullseye to take out 127 to get on the board. 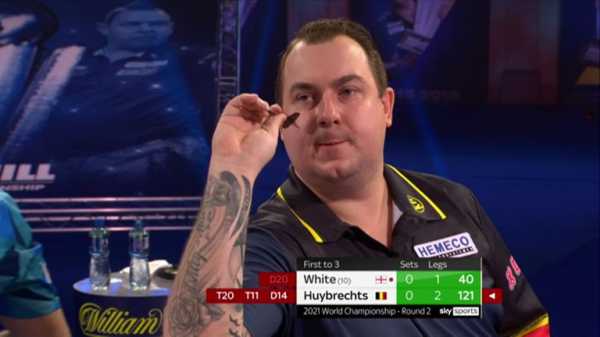 0:21 Kim Huybrechts claimed the first set against Ian White with a tidy 121 checkout

The Belgian, who reached the quarter-finals on his debut in 2012, hit back with a 121 finish of his own to take the first set and defied a 108 average from White to take a 2-0 lead before the world No 10 hit back.

However, when it mattered most, White’s doubling deserted him. He missed five darts for a 2-1 lead in the fourth and while he forced the set to go the distance, it was Huybrechts who kept his cool for an impressive victory.

Krzysztof Ratajski underlined his credentials to go deep at the World Championship with a 3-0 demolition of Ryan Joyce that saw him move into the third round. 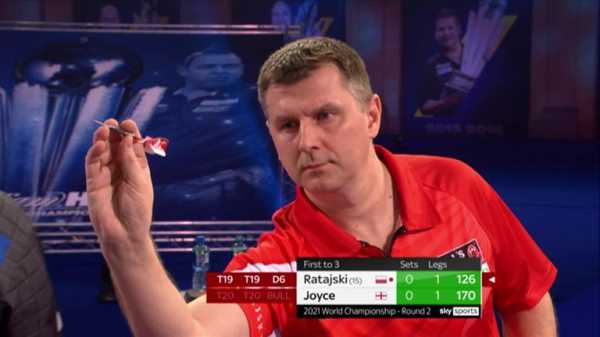 0:17 Krzysztof Ratajski nailed his 126 checkout to take control of the first set against Ryan Joyce

The last 32 is as far as the Polish Eagle has ever gone in three previous attempts but with seven Pro and European Tour titles over the last couple of years, he has risen to 15th in the world rankings.

Averaging more than 100 and hitting almost 50 per cent of his doubles, he won the fifth legs in the first and second set to seize the initiative – most crucially in the second-set decider, when Joyce missed three darts to level the match.

With a 2-0 lead behind him, Ratajski won three of the next four legs to sweep into the next round where either Simon Whitlock or Darius Labanauskas await.

Gabriel Clemens and Nico Kurz served up a classic that perhaps missed the fans more than anyone else as more than 25 per cent of the tickets sold before Christmas are usually to German fans. 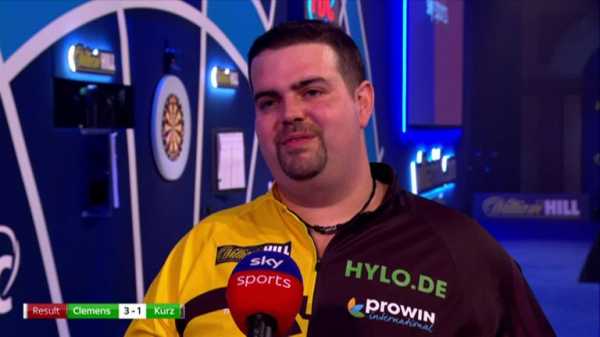 1:43 Gabriel Clemens came off beating compatriot Nico Kurz with confidence and feels he’s ready for the challenge of taking on Peter Wright.

It was the first time two German players had met in the event, and despite the empty arena, the pair served up a cracker that featured six huge finishes and eventually saw 31st seed Clemens into a third-round date with Peter Wright.

Clemens took the opener, underlining his status as his country’s No 1 but Kurz, who won the German Superleague to qualify, is a rapidly emerging name in the game and his world ranking of 129 is unlikely to last long. 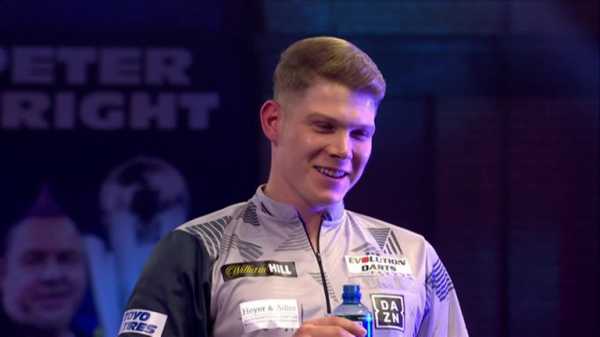 1:19 Nico Kurz hit four ton+ finished including a 160 and a 161 in his second round match against Gabriel Clemens.

He had beaten former World Championship runner-up Andy Hamilton in the first round and amid a barrage of big finishes, the 23-year-old levelled the contest, a brilliant 161 sealing a level contest before the more experienced man found a way to get over the line.

Clemens took the second to stand on the brink of victory and having wasted five match darts he pinned double 16 to seal his showdown with Snakebite and a place in the last 32 for the first time.

Don’t miss a dart this Christmas thanks to the dedicated Sky Sports Darts channel all the way until January 4 with every session from the World Darts Championship, including the final on Sunday, January 3.

Check out daily Darts news on skysports.com/darts, our app for mobile devices and our Twitter account @skysportsdarts