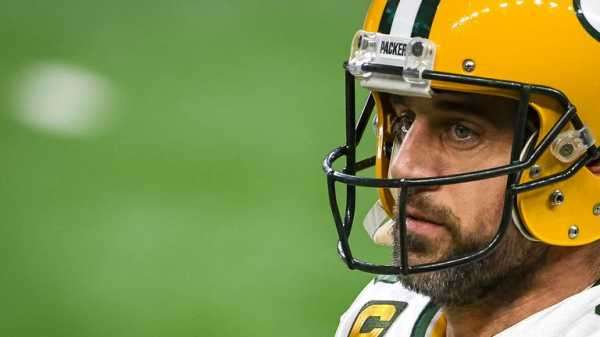 Brian Baldinger joins Neil Reynolds and Jeff Reinebold on Inside The Huddle to discuss whether it should be Patrick Mahomes or Aaron Rodgers who wins league MVP in 2020?

Patrick Mahomes or Aaron Rodgers; who is the frontrunner for the league MVP award of the 2020 NFL season?

With just three weekends of action remaining in the regular season, this is what was up for debate – along with Rookie of the Year and Coach of the Year – on the latest episode of Inside The Huddle, which you can listen to in the podcast player below. 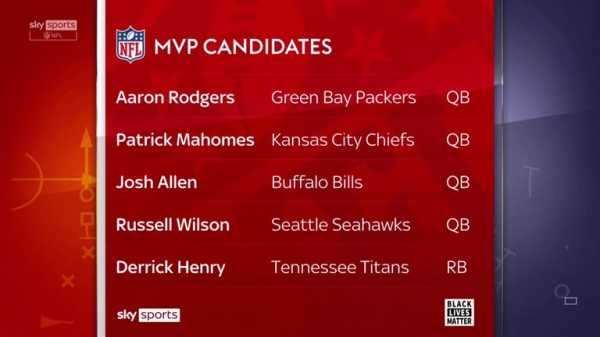 Reynolds: “I feel like this race has been discussed from Week Three onwards; Russell Wilson was firmly in the mix, but seems to be dropping off a little bit now.

“Aaron Rodgers has spoken this week about how much it would mean to him to win a third MVP. Tom Brady, Brett Favre, Johnny Unitas, Jim Brown and Peyton Manning are the only others to win three.

“I feel like Rodgers quietly goes about his business, whereas Patrick Mahomes gets a lot more of our attention – he has probably been the hottest of the bunch over the last month.

“And, representing the non-quarterbacks is Derrick Henry.” 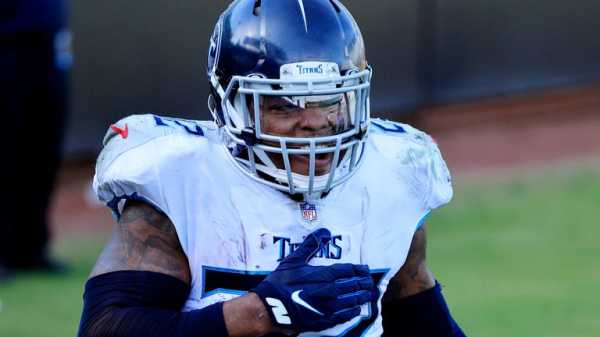 Baldinger: “I think it’s close, but right now I think Rodgers has taken a little step up over Mahomes. He has thrown fewer interceptions (four), more touchdowns (39) and his team is rolling.

“It’s pretty neck and neck right now between Mahomes and Rodgers; Mahomes against the New Orleans Saints this weekend could push him to the top, but I think it’s going to be a photo finish between those two players.

“What has separated Mahomes and Rodgers from Wilson is just how well they take cake care of the football.”

Reinebold: “To me, it’s like do you want ribeye or flank steak? You can’t go wrong.

“But to me, I lean towards Rodgers because of the fact he has been without some of his key weapons through the course of the season and his play doesn’t drop off.

“He doesn’t have as complete a team around him and, yet, they are playing extremely well. He has won another division championship and I just think he is the best player in football.

“I love Mahomes, he’s young, dynamic and he’s the face of the NFL now, but I still believe Rodgers is the best quarterback in the league.”

Rookie of the Year candidates 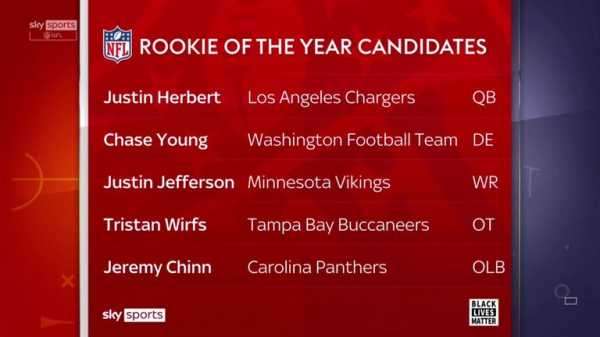 Reynolds: “When it comes to the end of season voting, you’ll have an offensive rookie of the year and a defensive one, but we’ve lumped them all together here.

“Justin Herbert is averaging 288.9 passing yards per game (correct as of 17th December recording), the best for a rookie in NFL history. Is he your No 1 or are you looking somewhere else?”

Reinebold: “The performance against the New England Patriots [a 45-0 loss] hurt him. Remember, this is Bill Belichick, who has an incredible record against rookie quarterbacks, but he looked confused and anything but a rookie of the year.

“To me, you look at Chase Young’s body of work, he is incredible! I’ve been breaking him down for this Sunday’s show and the only guy I’ve ever seen come into the league with that kind of first step is Khalil Mack. He is a really dynamic player.” 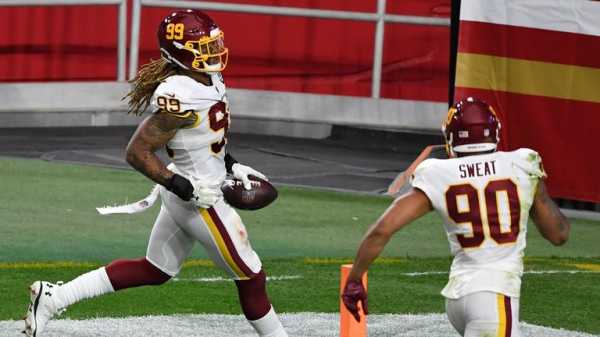 Baldinger: “Young is getting better and better. There is nobody else that moves like him, not at that size. He’s fluid, graceful and there’s not a crack he can’t get through.

“He plays the game really hard and he’s playing with a lot more awareness – he knows what is going on around him.

“He is not trying to make every single play, but the scoop and score last week [against the San Francisco 49ers], he just outran everybody through to the endzone.

“When I look at Rookie of the Year, I want a guy who elevates everybody around him. Young clearly, to me, elevates everyone around him, just like Nick Bosa did in San Francisco a year ago.”

Coach of the Year candidates 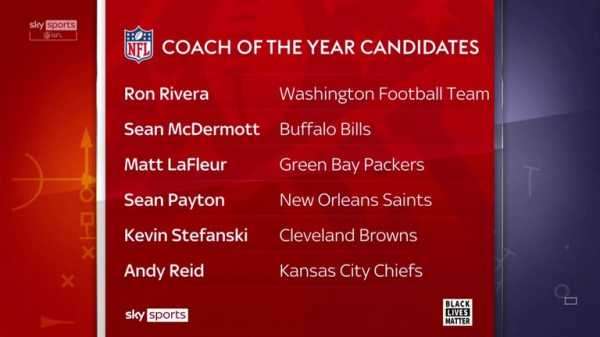 Reynolds: “There have been some great jobs done around the league; Washington head coach Ron Rivera has that team winners of four-straight games; Sean McDermott has the Buffalo Bills one win away from a first division title in 25 years; Matt LaFleur and the Green Bay Packers are incredibly consistent; Sean Payton has kept on winning even with Drew Brees sidelined; Kevin Stefanski has the Cleveland Browns on course for the playoffs for the first time since 2002 and Andy Reid of course has the top team in the league in the Kansas City Chiefs.

“I’m also making the case that Brian Flores should be added to the mix. When you look at what he has done with that Miami Dolphins team.”

“But when you look at what Rivera is doing, with a quarterback in Alex Smith who is just coming off having 17 surgeries, and having inherited an ugly culture in Washington – there was a big mess to clean up and a culture of losing.

“Then, in mid-August he was diagnosed with cancer and was going through treatment. But if you watch the way that team is playing, if they win this NFC East – regardless of what the record is – to me, then Rivera should be Coach of the Year. 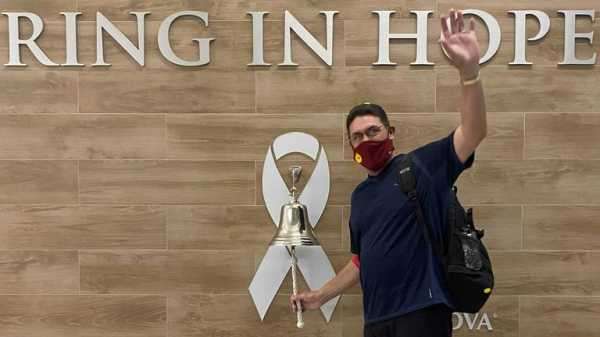 Reinebold: “I agree with Baldy 100 per cent. It’s more than the games he’s won, it’s the impact that he’s had in his first year. It took Flores two years to get to this situation, and he had a lot of the same issues.

“But, you’ve got to go back to 1990 for the last time Coach of the Year was awarded to a guy who didn’t make the playoffs, and that was Jimmy Johnson in Dallas, so if they don’t get to the playoffs, if may be too much for him [Rivera].

“The guy on that list who is under the radar is LaFleur, and it’s probably because his quarterback [Rodgers] is such a big personality.” 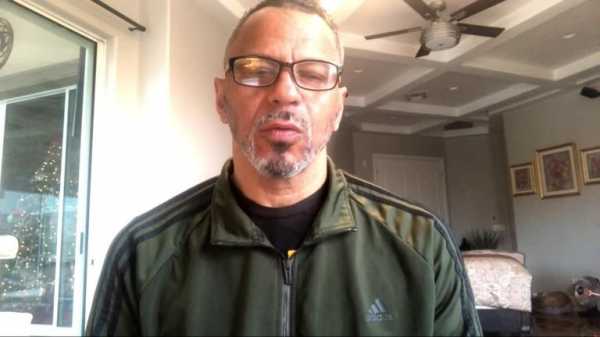 8:23 Hall of Fame cornerback Rod Woodson joins Inside The Huddle to look back on his storied NFL career.

Also on the latest episode of Inside The Huddle:

– Hall of Fame cornerback Rod Woodson joins the show to look back at his storied NFL career, including his Super Bowl winning run with the Baltimore Ravens in 2000

Sky Sports NFL is your dedicated channel for NFL coverage through the season – featuring a host of NFL Network programming, a new weekly preview show as well as at least five games a week and NFL RedZone, you won’t miss a moment. Don’t forget to follow us on skysports.com/nfl, our Twitter account @SkySportsNFL & Sky Sports – on the go!