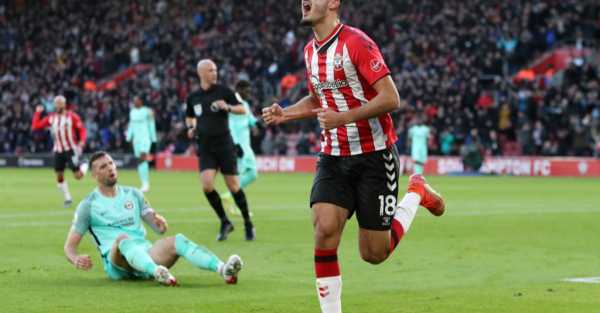 Ralph Hasenhuttl admits Southampton are struggling to find the right person to speak with at Chelsea regarding the future of loan star Armando Broja.

Striker Broja has shone for Saints this season and is poised to return for Saturday’s Premier League clash with Arsenal after being ineligible for last weekend’s 6-0 thrashing at the hands of his parent club.

Manager Hasenhuttl has regularly spoken of his desire to prolong the 20-year-old’s stay at St Mary’s beyond this campaign.

But, with Chelsea’s future clouded in uncertainty amid ongoing takeover talks, the Austrian concedes his club will have to remain patient for the time being as they focus on their quest for a top-half finish.

“We are discussing this topic in the moment,” Hasenhuttl said of Broja’s situation.

“We all know the situation at Chelsea that there are a lot of changes there.

“In the moment, it’s not so easy to find the right person to talk to and to speak about futures of players.

“It’s maybe easier to concentrate on your job, to do a good job until the end of the season. That helps him, that helps us.

“The higher we end up in the table, the more attractive we are for all of the players and this is the goal for the last seven games we have.”

Albania international Broja has hit nine goals in all competitions since temporarily swapping Stamford Bridge for the south coast.

Yet the Slough-born frontman has not found the net in the league for more than two months.

With Saints having taken only a point from their last five top-flight games – including the hammering against Thomas Tuchel’s European champions – Hasenhuttl is eager for Broja to rediscover top form, beginning against Mikel Arteta’s Gunners.

“Broja on his best level is definitely a player that can help us,” added the Southampton boss.

“But the important thing is that he also has to step up and find the way back to his best performances, like we all have to. This is the goal for the weekend.”

Hasenhuttl, who has suffered 9-0 losses to Leicester and Manchester United during his tenure, wants his players to swiftly move on from their latest heavy defeat.

“You get this experience when you are manager of this football club and we’ve definitely had these moments in the time we were working together,” he said of the Chelsea loss.

“There is still a lot to win this season.

“We have still a very good situation with 36 points, it’s very tight in the middle of the table and the important thing is we find back to the basics, to the fundamentals.

“We have a strong opponent on the weekend coming to us and hopefully we show a different face.”