Beirne was named man-of-the-match in Munster’s 9-7 Champions Cup win over Exeter on Saturday but was forced off in the second half. 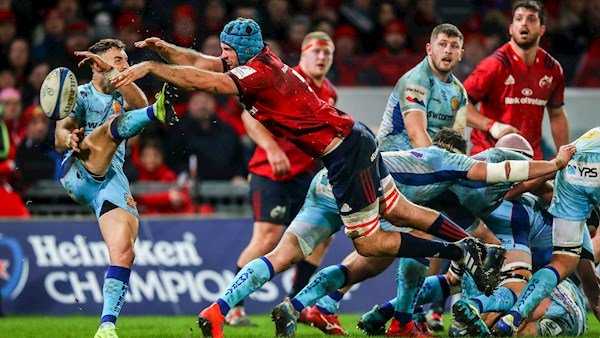 Beirne in action against Exeter.

The IRFU stated that following a scan, “Beirne has been ruled out of the opening two rounds of Ireland’s Guinness Six Nations campaign.” He will miss the games against England and Scotland.

Connacht lock Quinn Roux has been called up in his place.

The IRFU also confirmed that Leinster wing Adam Byrne will travel to the international team’s training camp in Portugal after Munster man Andrew Conway picked up a knock in the Exeter win.

They add that Conway “is unable to train this week but will be fully fit to train next week, ahead of Ireland’s eagerly-awaited opening clash with England.”

It was also confirmed that Jack Conan will continue treatment for a shoulder injury at Leinster, while Rob Kearney and Jack McGrath will also remain at Leinster to gain game-time in the province’s clash with Scarlets on Friday.

It proved to be a successful weekend for Irish rugby as all four provinces qualified for the knock-out stages of European competition.

Leinster’s win over Wasps set up an all-Ireland Champions Cup quarter-final with Ulster, who beat Leicester 14-13 on Saturday.

Munster’s win over Exeter will see the province face Edinburgh away, while Connacht’s 33-27 win over Bordeaux earned the Western province a Challenge Cup quarter-final spot against Sale.

Ireland’s Six Nations campaign kicks off against England on February 2.