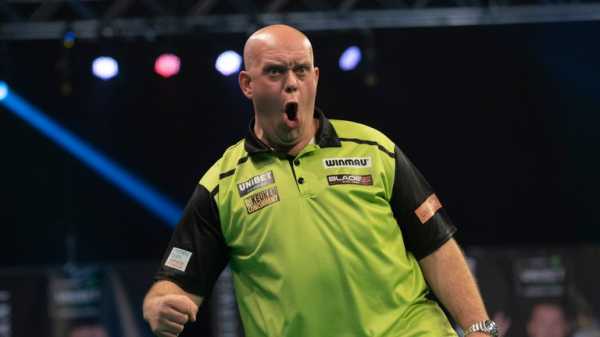 The five-time Premier League champion was averaging 118 as he stormed into a 5-0 lead, featuring bullseye finishes of 126 and 123 – it was Van Gerwen at his blistering best.

“Last week I had a horrible week, because I played really badly in the Super Series in Germany, so I had to come back, but never write off MVG on the stage,” he told Sky Sports following his victory.

It would be remiss to question the credentials of ‘The Green Machine’ when he is still capable of producing such brilliance, but he does find himself in unfamiliar territory.

He is without a title at this stage of a season for the first time in a decade, he only occupies the solitary major ranking title, while he has also slipped to third on the PDC Order of Merit – his lowest position since 2013.

Admittedly the sport’s growing strength in depth is a factor – the era of sustained dominance enjoyed by Phil Taylor and more recently Van Gerwen may be a thing of the past, but statistics collated by Darts Orakel are indicative of his inconsistency.

In terms of his scoring prowess, MVG is renowned for being the sport’s most proficient operator on the treble 19 and his consistency is unwavering in that department, although his treble 20 hitting has gradually declined by four per cent since 2018.

However, the doubling statistics during the corresponding period are equally significant. Van Gerwen boasted an impressive 45 per cent success rate on the outer ring in 2018, which is a far cry from his ratio of 39.79 per cent throughout the last 12 months.

During this period, he ranks 28th on the PDC tour in terms of his doubling success, but there are signs of encouragement – he has moved up to 17th in 2021, with a success rate of just under 41 per cent.

Despite that, his doubling accuracy in 2021 is three per cent lower when his opponent is waiting on a double – the largest gap between these two metrics for MVG in the last four years – further indication that the world No 3 is not the infallible figure he once was in critical moments. 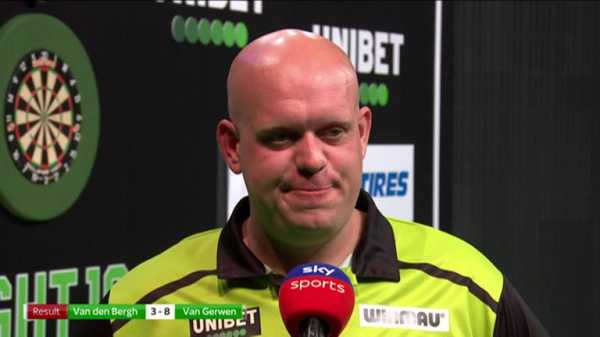 2:06 Michael van Gerwen says he can’t wait to perform in front of crowds again after he beat Dimitri Van den Bergh on Night 10 of the Premier League.

These factors have all contributed to a Premier League campaign littered with inconsistency for ‘Mighty Mike’, but he still finds himself just two points adrift of table-topper Nathan Aspinall, which is testament to his quality.

The question is – which Van Gerwen will grace the stage on Thursday evening? He was producing the type of performances seen against Van den Bergh on a regular basis three years ago, but at present, his game is shrouded in uncertainty.

The world No 3 has failed to register back-to-back ton-plus averages in this year’s event, but his Night 11 clash against Jonny Clayton offers him the opportunity to produce top-class displays in consecutive nights.

Ahead of his showdown against ‘The DreamMaker’, Wayne Mardle described it as a ‘make or break’ evening for Van Gerwen from a psychological perspective, and the Dutchman delivered in emphatic fashion.

“I felt for him to play like that tonight, means that he has got belief. He mentioned it in his interview that he went to Germany and had a terrible time. He played awfully there,” said Mardle. 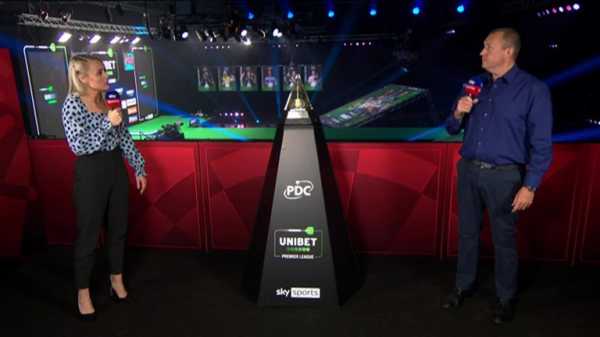 2:56 Wayne Mardle reviews the talking points from Night 10 in the Premier League in Milton Keynes.

Return of crowds could inspire MVG

“To come up on that stage against a man that maybe will take over as world No 1 in two, three, four, five years – he did it against the right person and Dimitri didn’t roll over.

“He just played brilliantly Michael. He knows he can do it, we know he can do it, but we’re just not seeing it night after night like we used to it. If he does it again tomorrow, he might be saying: ‘Ooh, maybe I am back a bit.”

That’s the key for Van Gerwen – replicating these performances on a consistent basis. There were signs of a resurgence at the World Championship when he performed magnificently, only to succumb 5-0 in the quarter-finals, albeit against a sensational Dave Chisnall.

The imminent prospect of crowds returning for the latter stages of the tournament could also provide the five-time Premier League winner with a timely boost.

By his own admission – Van Gerwen thrives on the adrenaline and atmosphere generated by a capacity crowd: “Of course I miss crowds. Probably more than anyone else in the world because I love to perform in front of crowds. I really miss them because that makes darts.”

However, champions are defined by their ability to adapt, and the Dutchman is undoubtedly one of the sport’s finest champions.

It is fair to say that given his current inconsistency, it’s hard to predict any game involving Michael van Gerwen with a sense of conviction, but as the man said himself: ‘Never write off MVG on the stage.”

Watch full coverage of every night of the Premier League on Sky Sports, and stick with us through the year as we bring you the latest darts news on skysports.com/darts, our app for mobile devices and our Twitter account @skysportsdarts