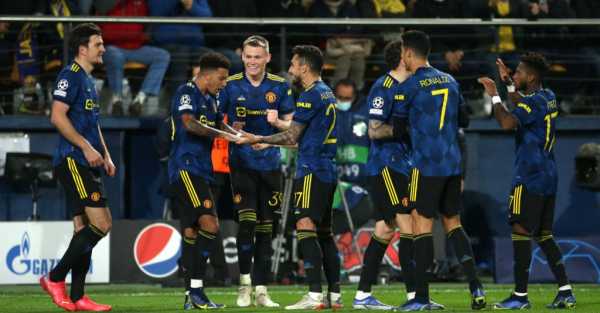 Michael Carrick has told Jadon Sancho he is in control of his own destiny after he got his first Manchester United goal in Tuesday’s 2-0 win over Villarreal.

Sancho scored United’s second in the last minute of the 90 at El Madrigal after Cristiano Ronaldo put the visitors in front with 12 minutes left of another Champions League late show, giving caretaker Carrick victory in the first game since Ole Gunnar Solskjaer’s dismissal.

Sancho has been slow to fire since his £73million move from Borussia Dortmund in the summer, but the goal capped the England forward’s best display yet for United.

“For Jadon it’s a massive boost,” Carrick said. “It’s a big goal for him, but it was about his performance overall. We know how much Jadon likes the ball at his feet, you see the smile on his face, but the pleasing thing for me was the effort and application he put in.

“At times he was not seeing a lot of the ball but he was always doing a job and playing a big part in the team’s performance. In the end you get your rewards and I’m delighted for him.

“I think Jadon epitomised the team performance. It’s up to Jadon now what happens next and how he kicks on. He’s got all the talent in the world and he’ll get all our support for sure.”

After Carrick’s introduction of Bruno Fernandes and Marcus Rashford kick-started United as an attacking force heading into the last 20 minutes, Sancho had already brought one good save from Villarreal keeper Geronimo Rulli before Ronaldo capitalised on a defensive mix-up to put United in front.

It was Ronaldo’s sixth goal in five Champions League appearances this season, and another decisive late strike from a player who has secured stoppage-time victories over Villarreal and Atalanta this season.

“There’s not much I can say about Cristiano that hasn’t been said over a number of years,” Carrick said.

“It’s what he does. In the big games, the big moments, when you need a goal he’s there to deliver. He’s got such a cold, calculated mentality, he’s so calm so he doesn’t snatch at chances.

“That’s what he’s been gifted with. I say gifted – he’s also worked very hard at being as good as he is and we’re delighted to have him. I’m not surprised at all.”

Sancho’s strike capped a swift counter-attack, started by Ronaldo before Rashford and Fernandes switched play to the right.

“The defending and inception for the second goal, that’s what we’ve got in the team, being able to hit on the break,” Carrick said. “That’s always been in the DNA of the club, and that’s the players we’ve got.”

Ronaldo’s goal came when Rulli’s pass to Etienne Capoue immediately put the midfielder under pressure with Fred pressing high, with the Brazilian able to poke the ball forward for Ronaldo do the rest.

United’s press came in for much criticism in the latter days of Solskjaer’s reign, but the goal showed how it can work.

“If you look back over time we have pressed as a team, especially on goal-kicks and when the goalkeeper has got the ball,” Carrick said. “We do try to press. Sometimes it hasn’t worked but the intention is to do it.

“Fred is one of the best at what we try to do. Cristiano finishes it off but Fred has done brilliantly…

“I was delighted with both goals, but I’m not taking any credit for that. It’s not about my ideas. It’s about the lads working hard and pulling it off. I’m delighted for our players, their effort and application. When we put that together with the full package we’re a good team.”