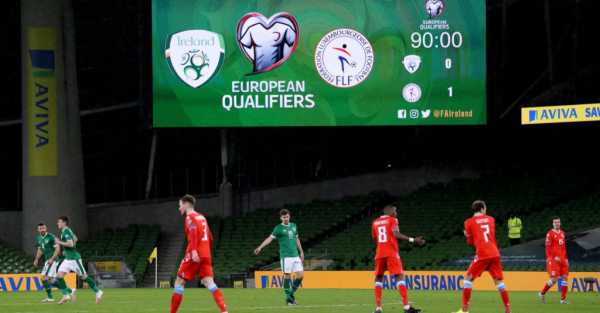 Stephen Kenny’s Republic of Ireland bring down the curtain on an ultimately disappointing World Cup qualifying campaign in Luxembourg on Sunday evening already looking to the future.

Neither side will be in Qatar next year as they battle it out for third place in Group A, but the green shoots of a new era for Irish football have started to emerge.

Here, we take a look at some of the talking points surrounding the game at the Stade de Luxembourg.

The darkest moment of Kenny’s testing reign to date came in March when Luxembourg left the Aviva Stadium with a famous 1-0 victory.

Three days after the Republic of Ireland had emerged from a hard-fought encounter with Serbia on the wrong end of a 3-2 scoreline in their opening fixture, they turned in a blunt display before succumbing to Gerson Rodrigues’ late strike in a 1-0 defeat later described by skipper Seamus Coleman as “embarrassing”. There is a determination within the camp to right an egregious wrong in the Grand Duchy.

That black night in Dublin proved something of a watershed for the Republic. Of the nine games they have played since, they have lost only one and that at the hands of a remarkable Cristiano Ronaldo rescue mission which got group favourites Portugal out of jail in Faro.

Wins over Andorra, Azerbaijan and Qatar may not prompt any sense of over-excitement, while home draws with Serbia and Portugal were more impressive than a similar result against the Azeris, but the Republic of Ireland have rediscovered the knack of being difficult to beat and that could prove invaluable for what lies ahead.

Shane Duffy’s return to top form has been key to the Republic of Ireland’s defensive solidity, but so too has the contribution of Sheffield United counterpart John Egan.

Kenny was so impressed with the 29-year-old’s performance in a committed display against Portugal that he ventured afterwards to suggest he was capable of playing Champions League, rather than Sky Bet Championship, football. Egan will, however, hope for a less testing evening in Luxembourg.

Rodrigues has been the shining star for Luxembourg in a campaign which has seen them win three of their seven games to date.

As well as his decider in Dublin, he fired his side into an unlikely lead against Portugal before they eventually fell to a 3-1 home defeat, converted what proved to be a decisive penalty in a 2-1 win over Azerbaijan at the Stade de Luxembourg and then helped himself to a double in the return fixture on Thursday evening. Rodrigues has scored five of his country’s eight goals and is undoubtedly the dangerman.

Newcastle midfielder Jeff Hendrick will hope Eddie Howe’s arrival at St James’ Park will bring some relief after making only three appearances, two as a substitute, for his club so far this season.

For the Republic of Ireland, however, he has rediscovered the kind of form which made him one of the stars of his country’s Euro 2016 finals campaign, a purple patch which has firmly established him in Kenny’s engine room.

The match will be broadcast live on RTÉ 2 and Sky Sports.