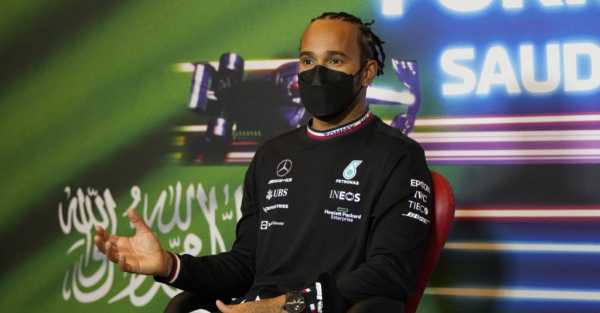 Lewis Hamilton is in the midst of the most exciting Formula One title battle in recent memory but insists he is uncomfortable racing in Saudi Arabia, highlighting the country’s “pretty terrifying” LGBTQ+ laws.

The inaugural race in Jeddah is the penultimate grand prix of the 2021 season in which reigning champion Hamilton and Red Bull’s Max Verstappen have tussled for the title.

Verstappen is just eight points clear heading into Sunday’s race in Saudi Arabia but Hamilton has the momentum of winning the previous two races for Mercedes.

One of those came in Qatar a fortnight ago where the Brit spoke out on the poor human rights record of the Gulf state, calling on F1 and other sportspeople to do the same.

“As I said at the last race that I felt the sport and we are duty-bound to ensure we try and raise awareness for certain issues, especially human rights in the countries we are going to,” he said on Thursday.

“With the utmost respect for everyone that is here, I have had a warm respect from everyone here on the ground.

“I can’t pretend to ever be the most knowledgeable or deepest understanding of anyone who has grown up in the community here that is heavily affected by so many rules and regimes.

“Do I feel comfortable here? I wouldn’t say I do but it is not my choice to be here, the sport has taken the choice to be here and whether it is right or wrong, I think while we are here I think it is important that we do try and raise awareness.”

Hamilton won in Qatar while wearing a new helmet sporting rainbow and coloured chevrons in support of the LGBTQ+ community.

With same-sex relationships illegal in both Qatar and Saudi Arabia, Hamilton confirmed he would again wear the new design around the Jeddah Corniche Circuit this weekend.

He added: “In the last race you saw the helmet that I wore and I will wear that again here and in the next race because that is an issue and is a law.

“If anyone wants to take the time to read what the law is for the LGBT+ community, it is pretty terrifying and there are changes that need to be made, for example women’s rights and being able to drive in 2018 – it is how they are policed.

“Are they really in effect? Why are some of the women still in prison from driving many, many years ago?

“There is a lot of change that needs to happen and our sport needs to do more.”

Amnesty International UK said Hamilton’s comments were “extremely encouraging” as it hopes the “glamour” of F1 arriving in Saudi Arabia does not turn eyes away from ongoing issues.

“It’s extremely encouraging to see Lewis Hamilton speaking out on women’s and LGBTI rights in Saudi Arabia like this,” chief executive Sacha Deshmukh said in a statement released to the PA news agency.

“It’s high-profile interventions like Lewis’s that help undo some of the sportwashing effects of Saudi-hosted events such as the Jeddah Grand Prix.

“The Saudi authorities seek to present events like the Grand Prix as supposed evidence of the country’s new ‘openness’, yet going into this race at least 39 people are currently in jail in Saudi Arabia simply for peacefully voicing their criticism of the authorities.

“It’s important that the glamour of F1 is not allowed to divert attention from the plight of Saudi women’s rights defenders, from the struggles of Saudi LGTBI people who risk imprisonment over their sexual identity, or from people like Hatice Cengiz, who is still seeking justice for the brutal murder of her fiance Jamal Khashoggi.

“This isn’t just about Lewis Hamilton. We’re calling on all within Formula One – the drivers, their teams, senior executives – to be prepared to speak out about human rights in Saudi Arabia, helping to undo some of the sportswashing effects of this event.”

Meanwhile, McLaren’s Lando Norris praised Hamilton for being something of a figurehead for the drivers.

“He’s experienced now and he’s in a position where he can do this and say these things and he obviously has a massive following as well,” he said. “So he can have a much bigger impact even than what I can.

“It’s good because it’s not solely with this where he is strong. He’s also strong with many other areas at the track and also away from it.

“So he is a good guy to have, not leading us, but being the prime guy talking about these kind of things.”