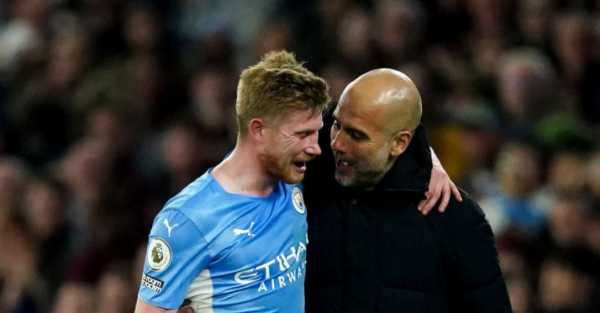 Kevin De Bruyne felt Manchester City handled the pressure well as they reclaimed top spot in the Premier League with this week’s crucial win over Brighton.

The champions found their stride after a nervy first half to maintain the advantage in a compelling title duel with Liverpool by beating the Seagulls 3-0 at the Etihad Stadium on Wednesday.

The result was a strong response to Liverpool’s thrashing of Manchester United the previous night and restored City’s one-point lead at the summit with six games remaining.

“Maybe (there were nerves) with the supporters but I felt we were doing all right,” said playmaker De Bruyne, who created two of City’s goals on what was his 300th appearance for the club.

“Obviously it’s hard because everybody’s under pressure. We weren’t disturbed by the pressure, I would say.

“In the second half, when you score the (first) two goals it makes it easier and I think we did OK.”

De Bruyne, back in the side after sitting out Saturday’s FA Cup semi-final loss to Liverpool with a knock, was instrumental in the victory.

The Belgian charged through from deep to set up Riyad Mahrez’s opener early in the second half and teed up the third goal for Bernardo Silva after Phil Foden had doubled the lead.

The 30-year-old is enjoying a fine run of form having also scored important goals in recent games against Burnley, Atletico Madrid and Liverpool.

He said: “I’m maybe not the loudest but I try to play the way I play and I think I have a lot of passion and drive when I’m in my actions.

“I think I can help drive the team forward and I don’t have to be different in any way because I think this is my best way to give something to the team.”

City will face Watford this weekend before turning their attention to next week’s Champions League semi-final against Real Madrid.

Pep Guardiola’s side reached the last four after hanging onto an aggregate advantage with a gritty goalless draw in a fractious clash with Atletico Madrid in the Spanish capital last week.

De Bruyne said: “It actually wasn’t good what we did but it didn’t have to be. Sometimes you have these games where it wasn’t a football game in the end.

“We had to cope with the circumstances and we were a little bit lucky with it sometimes, but sometimes it goes that way.

“There’s going to be hard moments because every team has a lot of quality and I don’t expect anything different against (Real) Madrid because the quality is there.”