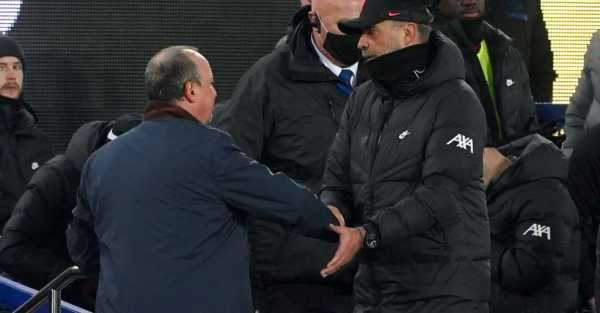 Liverpool manager Jurgen Klopp believes their resounding Merseyside derby victory over Everton at Goodison Park has set a benchmark for the rest of the season.

His side went to Old Trafford and hammered Manchester United 5-0 in October but Klopp was more impressed with the way his players handled the occasion of a feisty encounter against their near-neighbours to walk away with a 4-1 win.

Not only was it their biggest victory at Goodison Park in 39 years it was just Klopp’s second success at the home of their rivals.

And after the emotion of last season, when Virgil Van Dijk’s campaign was ended by an ACL injury and Thiago Alcantara also sustained a knee problem at Goodison before February’s first derby defeat at Anfield since 1999, the Reds boss was pleased with the way his players went about their business.

“It doesn’t mean anything for the future but it shows us that this is now our benchmark, that’s what we have to reach now in each game when we play these kind of teams, because emotions are important in football,” he said.

“We are a very emotional football team but, first and foremost, you need the right mood and mindset.

“Yes, emotion is good but not the only important thing.

“The two derbies for us against Everton and United are big games and you have to learn to keep yourself calm and together, if you want to play your best football.

“To be 100 per cent honest, when I look back there was not one derby at Goodison where I thought, ‘Wow, that was a great game, nearly perfect’, so there is a lot of space for improvement.

“So when you have counter-pressing situations you cannot do that without a bit of anger and a bit of greed and all these kind of things, so you need that.

“But then there are moments when you just have to move and pass the ball around their formation or through their formation, and for that you need a different mindset – and that’s what we had.”

Leading the way, as he often does, was captain Jordan Henderson who opened the scoring after only nine minutes and put in the complete midfield performance.

He has three goals already and is on his way to eclipsing his best goalscoring season of seven he managed in 2014-15.

“Hendo was good but with his skillset you should be good,” added Klopp.

“When you can train, when you can play, when you get rhythm and then you have the quality of Hendo, then you will play good football games.

“I think it was for him, as well, the best performance at Goodison.”