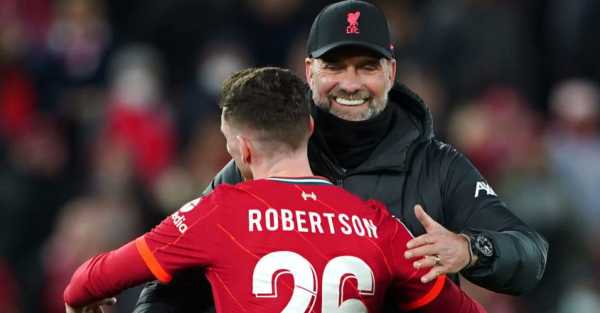 Robertson has not started the last two matches due to an injury sustained on international duty but looks set to return for Saturday’s visit of Southampton.

In his absence Tsimikas, in his second season at Anfield after a Covid-impacted maiden campaign, has impressed to the point where he is putting pressure on Robertson’s previously-undisputed spot as regular starter.

But Klopp has dismissed suggestions the Scot, who has been one of the club’s most over-worked players in the last three years, is not in his best form and insists he retains his total trust.

“It is pushing but I don’t see it as pushing in that sense,” he said on the left-back competition.

“Robbo is Robbo and it is just a bit strange people constantly forget how good Robbo is just because in these moments Kostas is good as well.

“Thank God he is good or we would have a problem. Before we had no real solution and Milly (midfielder James Milner) had to play there and did really well but now we have a different solution, that’s good.

“We have Kostas and Owen Beck coming up, a real prospect, so that’s good for us but I don’t doubt Robbo at all.

“Really happy about the development of Kostas, really happy, but Robbo is Robbo, an outstanding player.

“I don’t know if he had drops in performance here and there but it doesn’t change my mind because you can’t trust people today and not trust them the next day.

“You have to show these kind of things as that’s how you get the best long-term out of players.

“But I’m really happy Kostas shows how he showed up, an outstanding player.

“Robbo needed half-a year (to settle in), Kostas needed a year but now we see how good he is.”

After struggling with midfield injuries over the last month – Curtis Jones and Naby Keita out for the foreseeable future – Klopp is finding he has more competition in that department also.

Thiago Alcantara, scorer of a brilliant goal in the midweek win over Porto, and Alex Oxlade-Chamberlain have taken their opportunities to show they are close to getting back to their best form.

And with Jordan Henderson fit again after injury on England duty Klopp has more options than he has had for a while.

“It is much better because two weeks ago we pretty much had two-and-a-half midfielders and now that looks different,” he added

“We could use the Porto game to give some some minutes, give some rest so for the first time in a while I have to make some decisions, which is actually cool.

“Thiago is an incredible player for us, of course, but we found solutions when he wasn’t available and we have to find solutions.

“It’s not about one player out or in, the quality of our midfielders when they are fit means there is an incredible choice to be honest.

“Thiago has a very specific skillset, absolutely, and is very helpful when on the pitch when he has rhythm.

“That’s the challenge we face – to make sure he can gain rhythm but not overdo it.

“We have that with all the players, especially with the amount of games coming up.

“We have a similar thing to do with Ox a little bit. After a long period he played now a lot of games, others have come back from injury.”