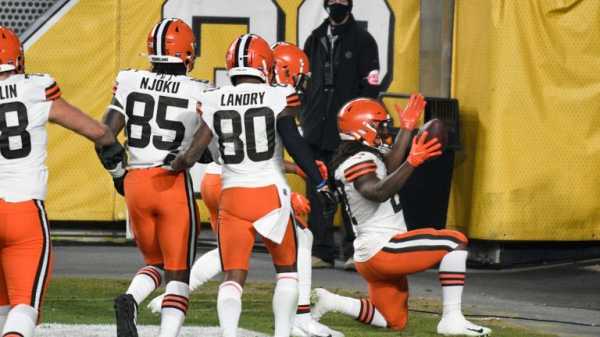 The NFL’s Super Wild Card weekend delivered bags of drama, plenty of close games and six teams keeping their season alive – we pick out the winners and losers. 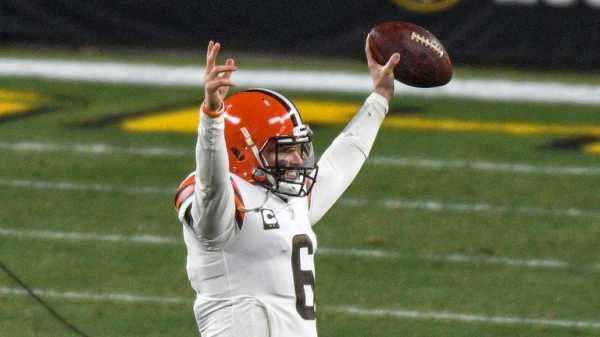 2:18 Cleveland quarterback Baker Mayfield starred as the Browns beat the Pittsburgh Steelers for their first win in the playoffs since 1994

It was late Sunday night, or early Monday morning to be precise, when Browns fans may have been forgiven for thinking they were dreaming as their team raced out to a 28-0 first-quarter lead against the Steelers – and in Pittsburgh, where they have not won since October 2003, and chasing a first playoff success since 1994.

Game over, right? Not for Cleveland it wasn’t. Tortured Browns fan Marc Sessler – one of the Around the NFL podcast heroes – knew it, he had been on this road before, all too aware of how quickly things could turn.

Time to panic? Well, yes… But fortunately, just as many fans may have been grasping for that Brown(s) paper bag of theirs, Nick Chubb broke loose for a 40-yard touchdown in the fourth quarter and Cleveland closed the game out – sparking wild scenes of celebration in the Sessler household I am sure! 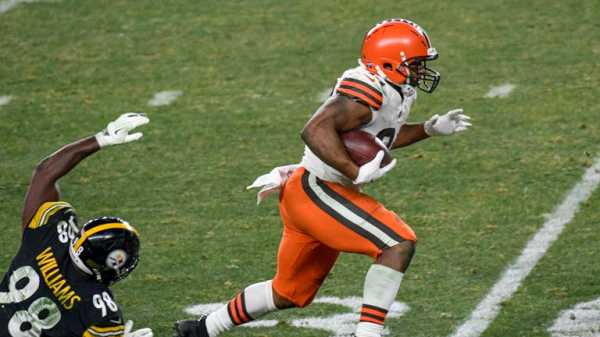 0:30 Nick Chubb sprinted 40 yards for the touchdown as Cleveland went on to beat Pittsburgh to set up a Divisional Round matchup against Kansas City

The Bills brought to an end their own playoff curse of 25 years with a win over the Colts to kick-off Wild Card Weekend on Saturday, with their star quarterback Josh Allen playing a leading role. 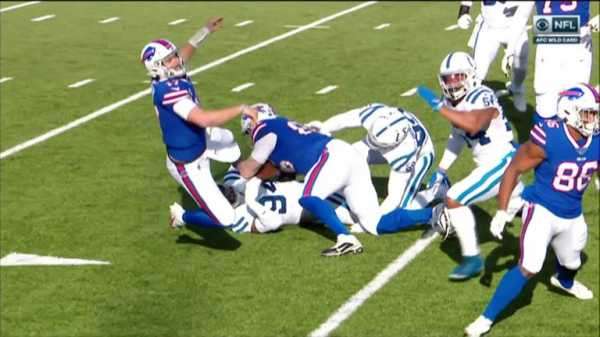 0:45 Josh Allen shows off his improvising skills as he tries to run the ball on 2nd and Goal from the three-yard line, only to then throw it up to Dawson Knox in the endzone

Allen and the entire Bills squad did not get things all their own way against a resilient Colts team, who threatened to pull off the upset for long spells.

The third-year quarterback has certainly played better this season and looked back to his old skittish self at times. But there were also moments of improvised magic from Allen, including his first-quarter TD to Dawson Knox that came on an initially designed run play, while he found favourite target Stefon Diggs for the game-clincher in the fourth. 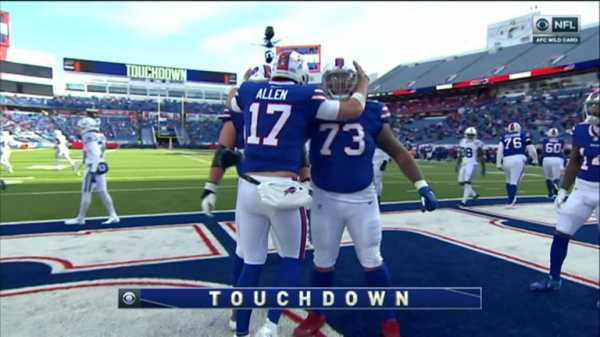 1:08 Josh Allen grabs the Bills’ second touchdown of the game, just before half-time against the Colts

That’s the most important thing, Allen got this Bills team over the line – something that is not exactly a habit in Buffalo – and in front of 7,000 adoring fans in attendance for the first time this season too.

Heinicke might have been a loser this weekend in the most literal sense, but his heroic display on Saturday night oh so nearly saw Washington pull off a massive upset against Tampa Bay and Tom Brady’s six Super Bowl rings. 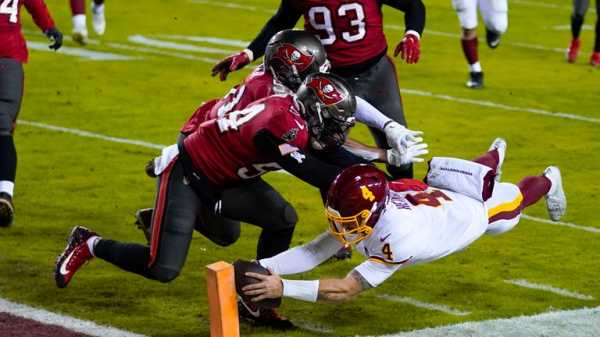 Heinicke – an undrafted free agent in 2015 who was a backup for the XFL’s St Louis Battlehawks only a year ago – had a night; he completed 26 of his 44 passes, for 306 yards and one touchdown, while he also had 46 yards on six carries, including a thrilling eight-yard scamper and dive for the endzone in the third quarter.

That score brought Washington to within just two points of the Buccaneers – the closest they would get – though another Heinicke highlight, a perfect fade ball to Cam Sims for an 11-yard score in the fourth quarter again made it a one-score game.

Heinicke could not quite get it done down the stretch, but his efforts have surely earned him a chance at the starting gig in Washington in 2021 or, at the very least, boosted his backup pay cheque. For the entertainment he gave us in the early hours of Sunday morning, it is fully deserved.

That was not in the script, was it? 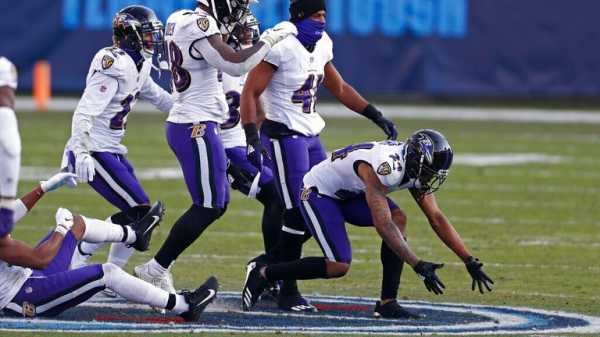 1:11 Ryan Tannehill is picked off by Marcus Peters, sealing the win for the Ravens, who rub salt into the wound by celebrating on the Titans logo

Only a week before the Titans’ playoff loss to the Ravens, Henry had gone off against an admittedly non-existent Texans run defence to the tune of 250 yards, seeing him become only the eighth man in NFL history to top 2,000 rushing yards in a season.

Henry had also logged 133 yards and the 29-yard game winner in overtime when the two teams met during the regular season, that on top of his 205 in their upset playoff win in the divisional round last year.

How were Baltimore going to stop him? Well, pretty comfortably actually. The Ravens defence shut Henry down the entire game, with his stat line reading a measly 40 yards from 18 carries as the Titans offence was stifled and sent home from the playoffs. 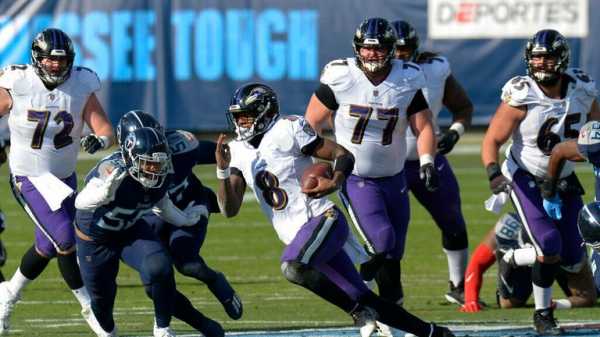 5:43 Highlights of the Baltimore Ravens against the Tennessee Titans in the NFL Playoffs

It’s hard to see specifically where things went wrong for the Seahawks on Saturday in their hugely disappointing 30-20 defeat to the Los Angeles Rams. 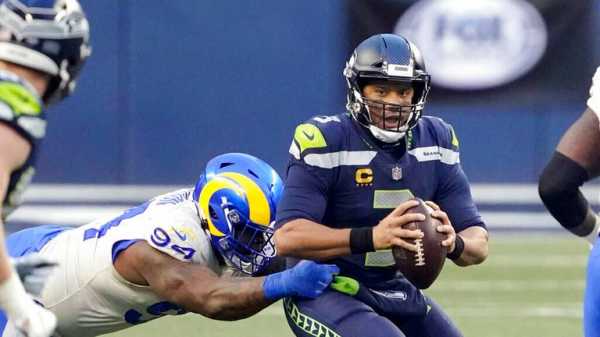 6:48 Highlights of the Los Angeles Rams against the Seattle Seahawks in the NFL Playoffs

The offence stunk. Russell Wilson was poor. They could not protect him – giving up five sacks and countless more pressures – they also could not run the ball, and there were any number of countless other complaints that could be levelled at the team’s offence specifically.

Is it not now time to look at the coaching? Pete Carroll is not going to get fired for this loss, nor should he, but it’s time for this team to change things up on offence and he needs to be at the heart of that.

Patrick Mahomes, Josh Allen and a number of other young QBs are reaping the benefits of playing for up-and-coming offensive coordinators? Look even to the opposite sideline and think of what Wilson might achieve if paired up with Sean McVay.

Perhaps a little harsh, especially on all of those New Orleans fans out there who are quite rightly celebrating moving onto the divisional round – booking a meeting with Tom Brady and the Buccaneers – but this game was an ugly watch! 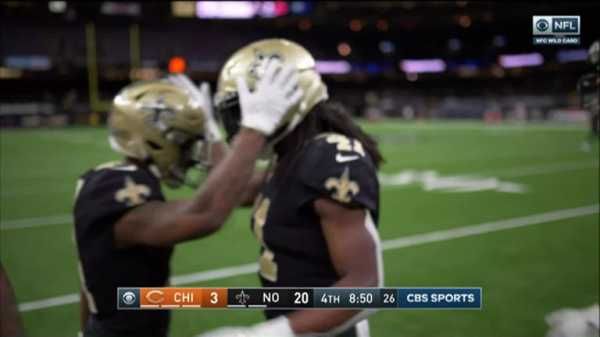 0:44 Alvin Kamara extends the Saints’ lead over the Bears with their third touchdown of the night

More than half (10) of the 19 offensive drives in the game resulted in punts, while there was a Taysom Hill fumble, a missed field goal and turnovers on downs to boot.

The Saints did just about enough on offence – Drew Brees throwing two touchdowns – but barring the occasional deep ball to the returning Michael Thomas, the dink-and-dunk approach down the field was not exactly electrifying. 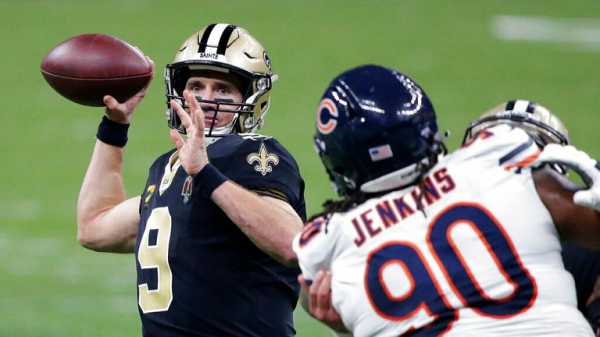 5:36 Highlights of the Chicago Bears against the New Orleans Saints in the NFL Playoffs

Then, as for the Bears, the offence that has plagued them all season again was stifled by a strong Saints D. They gained just 239 yards and 11 first downs the entire game – four of them coming in the final two minutes as they scored a touchdown with the very last play.

On a ‘Super’ Wild Card Weekend, this one was anything but.