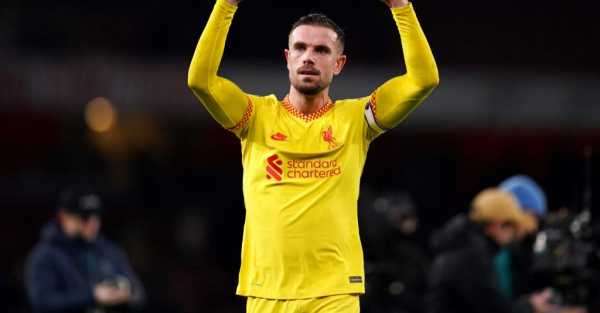 Liverpool skipper Jordan Henderson believes it would have made sense to switch the Reds’ FA Cup semi-final against Manchester City away from Wembley.

The Football Association confirmed on Friday that the tie between the north-west giants will go ahead at the national stadium in north London on April 16 despite the West Coast Mainline train service being down over the Easter weekend because of engineering works.

The FA has pledged to lay on 100 buses from Anfield and the Etihad Stadium and back to take 5,000 Liverpool and City fans to the match, and advised supporters should avoid travelling by train from the north-west wherever possible.

England midfielder Henderson sympathises with the inconvenience this causes to fans, and personally favours a return to the traditional approach of staging semi-finals at neutral club grounds and reserving Wembley for the final.

“I think this time, I’ve been thinking a bit more about the fans,” he said.

“In many ways it’s their day, and not being able to get down to London for different reasons – the cost of that…

“In my head it would make sense obviously to change it to a (different) neutral venue, especially with it being two teams from the north-west.

“That’s just my opinion. There’s obviously complications within that I’m sure which the FA have got to overcome but looking at the fans, which is probably the most important thing for me and something that we’ve learned over the past couple of years how important the fans are to football, that it is really disappointing to see that it’s a struggle and it’s got to be expensive for them to get there.

“To be honest – again, my opinion, and I love playing at Wembley – I would like to keep Wembley for finals anyway. I think (we should) play semi-finals at neutral grounds like it used to be.

“I think that was quite exciting, quite good and then obviously the final at Wembley to make it extra special.”

The FA decided in 2003 that the semi-finals would be played at Wembley starting in 2007-08, the first full season after the new stadium opened.

Supporters were credited by the FA and other authorities within the game for the part they played in the collapse of the Super League last year, and the mayors of Manchester and Liverpool had called on the FA to switch the venue to help fans.

The FA said it recognised the “significant challenges” facing Liverpool and City fans but confirmed on Friday that the match would go ahead at Wembley, kicking off at 3.30pm.

The kick-off time falls within the traditional Saturday television blackout hours, but because only three Premier League matches are kicking off at 3pm and no EFL games start at 3pm that day, there was no need for the FA to seek an exemption under Article 48 of the UEFA statutes.

As well as the buses to Wembley for the men’s semi-final, the FA said it would lay on a number of buses to Manchester City Women supporters for the Women’s FA Cup semi-final against West Ham at Dagenham.

The FA statement added that it was working with Highways England to try to ensure smooth road journeys, with roadworks put on hold to aid supporters travelling from the north-west.