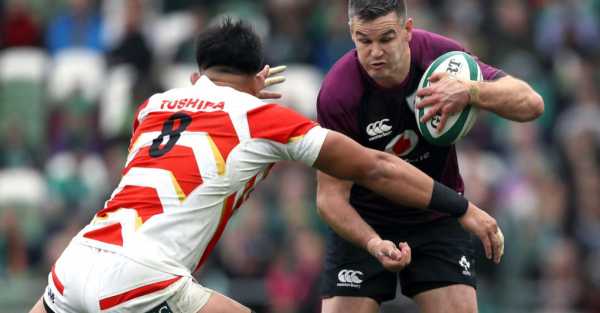 Johnny Sexton believes Ireland are beginning to fire on all cylinders under head coach Andy Farrell but warned it is unrealistic to routinely expect free-flowing rugby.

The Irish warmed up for Saturday’s sold-out Dublin showdown with New Zealand by producing arguably their best attacking performance of the Farrell era as they ruthlessly dispatched Japan 60-5 last weekend.

Captain Sexton claimed 16 of those points against the outclassed Brave Blossoms to celebrate his 100th cap in style.

Despite the impressive display, the Leinster fly-half insists there is room for improvement ahead of the All Blacks’ visit to the Aviva Stadium, while he feels it is important to have an adaptable style of play.

“It was important for us to start on a good note,” Sexton said of Ireland’s autumn campaign, which also includes an appointment with Argentina on November 21.

“We put a lot of pressure on ourselves last week to not be standing here today and saying, ‘We only had a few sessions to prepare’.

“I think now that the coaches have been in place for a couple of years, we’re starting to get used to the systems and stuff like that and we were able to hit the ground running.

“But, at the same time, we saw a few things in the game that the All Blacks might have seen and we need to brush up on a couple of things to make sure we’re ready to go against the best team in the world on Saturday.”

Asked about maintaining an exciting brand of rugby, the 36-year-old replied: “That’s just the way the game unfolded on Saturday. We’ve always had the licence to do that.

“If it comes and it’s raining or conditions are really bad or they play a different type of defence to what Japan showed us then we’ll play the right options that we see fit.

“The most important thing is that we win – that’s what we’re judged on.

“It’s great getting some plaudits for how we played the game on Saturday. We showed bits of that during the Six Nations but the most pleasing part about it was that it was a bit more consistent.

“We’re playing against much better opposition this week, I think.”

Sexton was involved in each of those historic triumphs under Farrell’s predecessor Joe Schmidt – a 40-29 victory in Chicago in 2016, followed by a 16-9 Dublin success two years later.

However, Schmidt’s final game in charge saw the Irish concede seven tries as they exited the 2019 World Cup after a 46-14 quarter-final loss to the All Blacks in Tokyo.

“When you go back to that 2019 game, it was the biggest one of the lot of them and we didn’t play as well as we could,” said Sexton.

“We made mistakes, which they capitalised on. We didn’t take chances we had. And that’s the game.

“If they go a couple of scores up they’re very hard to chase down, so we’ve got to concentrate on ourselves, make sure we get the very, very best performance we can on the pitch on Saturday and see where that leaves us.

“We know what’s coming because we’ve played against them so many times.”