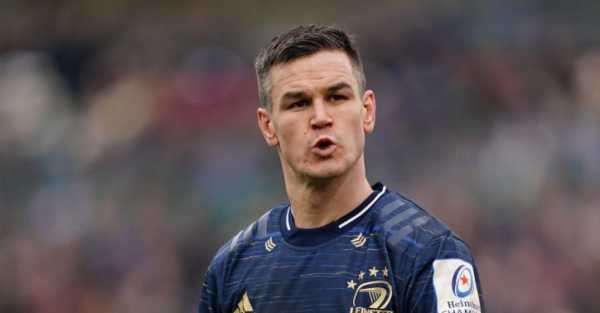 Smith has shone in the opening three rounds of his maiden Guinness Six Nations campaign and leads the championship’s individual points table ahead of a potential meeting with Sexton during Saturday’s Twickenham showdown.

The 23-year-old, who helped Harlequins win last season’s Gallagher Premiership title, only made his international debut last summer before being summoned to join the British and Lions tour of South Africa.

Ireland captain Sexton has been impressed with Smith’s rapid progress and expects his rival number 10 to be influential at Test level for the next decade.

“Marcus has come in, he’s had a big impact on international rugby already,” said Sexton, who is more than 13 years Smith’s senior.

“He’s done so much at such a young age: to win the Premiership, to have got his English cap, to go on the Lions tour.

“He’s ticking a lot of boxes already, and he’s got the world at his feet, really. It’s how he can keep those feet on the ground and keep working hard.

“But he’s been very impressive so far, and he’s shown all the tricks: short kicking game, good passing game, good running game, so he’s got it all, and he’s going to be a big player over the next 10, 12 years for England.”

Sexton has become accustomed to pitting his wits against George Ford and the injured Owen Farrell during recent meetings with Eddie Jones’ side and acknowledges Smith presents a “slightly different challenge”.

He is poised for possibly the final Twickenham appearance of his illustrious career having on Tuesday announced he will retire after the 2023 World Cup.

The 2018 world player of the year has mixed memories of the stadium.

He helped clinch a Grand Slam there on St Patrick’s Day in 2018 but has lost on five of his seven appearances, including his most recent outing, a comprehensive 24-12 defeat in the 2020 Six Nations.

Ireland travel to London knowing defeat will eliminate the loser from this year’s title race and Sexton is braced for a tough assignment.

“The last time we were there it didn’t go to plan,” he said.

“The last couple of times we were there we’ve been beaten once in a full stadium in the last game before Covid hit and then obviously we had a game during Covid (in the Autumn Nations Cup) and we didn’t come away with a win either time.

“They’re a top team, they’re ahead of us in the world rankings, and we have it all to do away from home.

“We just need to concentrate on ourselves and make sure we do our prep in terms of their team and individuals and threats they pose.

“Ultimately it will come down to how we play on the day under the pressure they put on us.”

Having agreed one final contract with the Irish Rugby Football Union, Sexton firmly has his sights set on travelling to France next year for the fourth World Cup of his career.

Ireland have never progressed beyond the quarter-finals of the tournament, a statistic Sexton – who was part of the squad to reach the last eight in 2011, 2015 and 2019 – admits had a major bearing on opting to prolong his playing days.

“It’s a huge factor,” he said. “I’d like to think that even if we were successful at previous ones, I’d still have the drive.

“But it makes it that much easier to want to go again because I’ve been very grateful for the career I’ve had, but you do look back and go, ‘we gave up some chances at World Cups, and we also didn’t perform at other World Cups’ and you want to put that right.

“It’s just an opportunity at the moment, you’re not guaranteed anything with selection, and you have to continue to stay fit and keep your form and warrant your place in the team. But to have that opportunity is great now.”