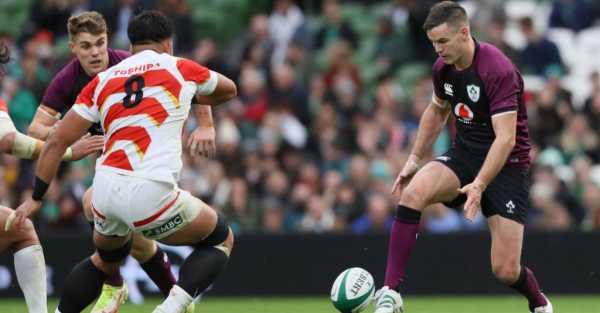 Andy Farrell will be happy today after Ireland’s comprehensive 60-5 win over Japan in Dublin in the Autumn Nations Series.

The home side ditched their traditional green jerseys for the game in favour of a purple alternative.

Johnny Sexton, who was afforded a standing ovation from the below-capacity crowd ahead of kick-off, added the extras for the first two tries before being slightly off target for the third.

It was a big day for Sexton as he captained Ireland on his 100th Test appearance for the country.

His appearance against Japan means he is now the seventh Irishman to reach the milestone, following in the footsteps of Brian O’Driscoll, Ronan O’Gara, Rory Best, Paul O’Connell, John Hayes and current team-mate Cian Healy.

At the end of the first half Ireland were 29-0 ahead after an impressive Gibson-Park claimed the sides fourth try of the afternoon in the 34th minute with Sexton converting having earlier slotted a simple penalty from in front of the posts.

Japan were briefly down to 14 men after hooker Atsushi Sakate was sin-binned in first-half added time for repeated infringements.

Sexton had the crowd on their feet as he marked his milestone appearance by touching down wide on the right early in the second half before converting to make Ireland lead 36-0.

Japan finally got on the scoreboard late in the second half with winger Siosaia Fifita claiming a consolation score.

Cian Healy bagged himself a late try 80 minutes in which was converted by Carbery to finish the game 60-5.

Head coach Farrell could not have wished for much more from his side’s opening match of the month, but they will face a far more serious test with the All Blacks in town next Saturday, followed by Argentina the following weekend.