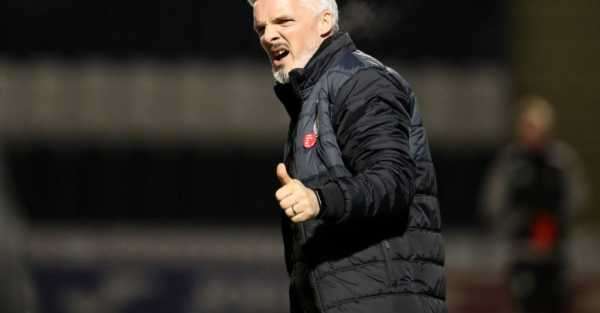 Jim Goodwin is relishing a “dream” opportunity to manage one of Scotland’s biggest clubs after being handed the reins at Aberdeen.

The 40-year-old Irishman, who was given permission to speak to the Dons by St Mirren on Friday, has signed a two-and-a-half-year deal and was due to be in the dugout for Saturday afternoon’s cinch Scottish Premiership clash with Motherwell at Fir Park.

Goodwin, whose appointment was announced by the club on Saturday morning, told Aberdeen’s official website: “I am hugely honoured to have been offered the role of manager at this great football club.

“I would like to thank the board for putting their trust in me and I will do all I can going forward to repay the faith they have shown in me.

“The opportunity to work at one of the biggest clubs in the country is a dream come true and I can’t wait to get started.

“Not only does Aberdeen FC have a great history and fanbase, but it also has a clear ambition to be successful both on and off the pitch, an ambition which matches my own. You only need to see the level of investment made at Cormack Park (the club’s training ground) to realise that.

“I can guarantee everyone connected to Aberdeen FC that I will give my all on a daily basis to ensure the club has the success it so richly craves and deserves.”

Goodwin, who will be assisted at Pittodrie by Lee Sharp – his number two at St Mirren – inherits a club sitting eighth in the table but without a win in six games in all competitions, a run which cost Stephen Glass his job last Sunday.

Chairman Dave Cormack said: “Jim is a young, successful manager who is ambitious and relishing the opportunity to bring success to the club.

“He fully embraces our vision and strategy and on behalf of everyone associated with Aberdeen Football Club, we welcome Jim as our new manager.”

Former midfielder Goodwin, who won one cap for the Republic of Ireland, began his coaching career at St Mirren and after a spell at Alloa, where he won promotion to the Championship, returned in the summer of 2019 to take charge once again.

Thanking him for his service, Fitzpatrick told the club’s official website: “Jim raised the bar during his time at the club, reaching both the semi-finals of the League and Scottish Cups last season as well as achieving our highest top-flight finish in over 30 years.

“I know leaving St Mirren was a difficult decision for Jim and while we are disappointed to lose him, Aberdeen met a release clause within his contract and we respect his decision to move on.”