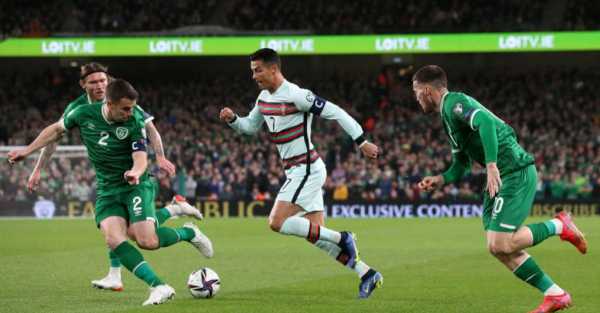 The Republic of Ireland came up just short of a memorable win over Portugal in their penultimate World Cup qualifier at the Aviva Stadium.

Portugal dominated the early exchanges with Gavin Bazunu having to save from Andre Silva and Coleman blocked Ronaldo’s goal-bound shot, but Ireland held firm as the first half reached its mid-point.

The home side forced a series of corners as the half wore on, but were unable to make the most of them as the game reached the break scoreless and with neither keeper having been troubled unduly.

Portugal were left to play the final eight minutes with only 10 men when Pepe, who had earlier been booked for handball, received a second yellow card for a foul on Callum Robinson and was sent off.

Ireland threw everything they had at Portugal as time ran down, but were unable to fashion an opportunity to clinch a famous victory.

Indeed Ronaldo might have won it six minutes into stoppage time, only to see Bazunu block his shot from a tight angle at the near post as the game ended goalless.