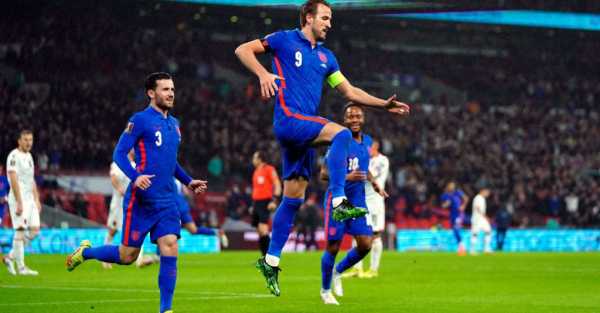 Harry Kane scored a first half hat-trick as England all but secured World Cup qualification with Friday’s five-star display against Albania.

A first sell-out Wembley crowd in two years witnessed a one-sided final home match of a memorable year in which the Three Lions went agonisingly close to winning the European Championship.

The Euro 2020 runners-up will get another shot at silverware next winter, barring an unthinkable turn of events, after running out comprehensive 5-0 victors against Albania under the arch.

Friday’s win means Southgate’s side only need to avoid defeat in San Marino – the world’s worst side – on Monday to confirm their place in Qatar, where the 2018 World Cup semi-finalists will be among the favourites.

England showed their quality in a ruthless, free-flowing first half, with Harry Maguire sending a message to the critics when celebrating his headed opener at Wembley.

Kane has also been far from his best of late but the skipper put that right against Albania, scoring a perfect hat-trick as he followed up a headed opener with a left-footed strike and right-footed stoppage-time scissor kick.

The Tottenham striker moved on to a record 39 competitive goals for England and level in the all-time goalscoring rankings with the late, great Jimmy Greaves on 44.

Kane also provided the assist for Jordan Henderson’s goal in an outstanding first half followed by a controlled second period as the Three Lions avoided exerting unnecessary energy in the penultimate match of a mammoth year.

Southgate spoke before this Group I clash of his desire for a response to last month’s poor 1-1 home draw against Hungary and named the most experienced starting line-up of his reign.

In-form Ben Chilwell and Reece James were deployed as wing-backs as the hosts went at Albania from the outset, requiring just nine minutes to open the scoring.

Impressive James sent over a free-kick from the right that towering Maguire headed home, with the Manchester United captain celebrating by cupping his ears and then putting his fingers in them.

Phil Foden fired over as England looked to press home their advantage against a side forced into early changes following injuries to Keidi Bare and Marash Kumbulla. The pair limped off either side of a massive missed opportunity for their team.

Kyle Walker’s careless backpass put Myrto Uzuni through one-on-one with Jordan Pickford, but the England goalkeeper held his nerve and stopped the strike.

It was a save that England built on in style, starting in the 18th minute.

James and Foden were involved in an impressive attack that ended with Henderson clipping a cross over for unmarshalled Kane to head home from close range.

Albania had racked up three bookings by the midway point of the opening period as they struggled to slow England, who grabbed a third in the 28th minute.

Henderson collected a return ball from Kane and kept his cool in the box, jinking into space before hitting a low shot past Thomas Strakosha. The Liverpool skipper’s first Wembley goal was ratified after a VAR review.

Kane saw a close-range shot blocked and Strakosha tipped his 20-yard curler wide as relentless England kept their foot down, with John Stones heading over before they did add another.

Albania were all over the place and Kane capitalised when making space to lash home a left-footed from an acute angle in the 33rd minute.

The Three Lions skipper struck just across the face of goal and headed another off target as the one-way traffic continued, before Kane impressively completed his fourth England hat-trick.

The skipper met a stoppage-time corner from Foden with an acrobatic strike that went in via a slight deflection.

Kane struck over as he looked for a fourth during a placid start to a tame second half. The striker was then taken off as Southgate made changes, with a Mexican wave going around the stadium.

There was a break in play after Stones and James clashed heads, but both players were cleared to continue and the latter struck wide shortly after.

Substitute Jack Grealish saw an attempt stopped before Emile Smith Rowe came on for his debut as paper planes began to rain down and the match wound down.