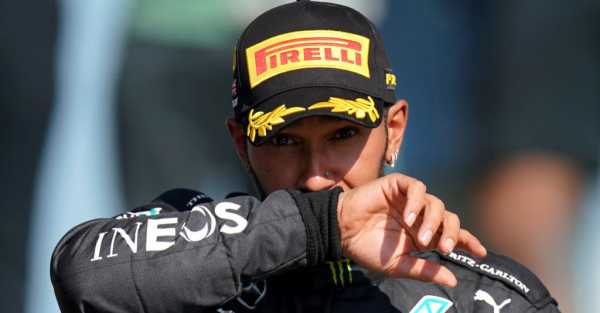 Lewis Hamilton’s championship hopes were dealt a major setback after he was excluded from qualifying and demoted to the back of the grid for today’s sprint race at the Brazilian Grand Prix.

FIA stewards determined that Hamilton’s Mercedes fell foul of the technical regulations and his pole lap at Interlagos was chalked off.

Hamilton’s punishment promotes rival Max Verstappen to the front of the grid.

Hamilton is already facing a five-place grid penalty for Sunday’s main event after Mercedes changed his engine for a fifth time this season.

Verstappen was also investigated after he touched Hamilton’s car in the aftermath of qualifying here.

But the Dutchman escaped with a €50,000 fine and no further punishment.

The penalty comes as a seismic blow to Hamilton’s dream of winning a record-breaking eighth world title, with Verstappen now in the driving seat to extend his championship lead. Just 78 points are available following Sunday’s Grand Prix.

But although the stewards were in agreement with Mercedes that “something had gone wrong” with Hamilton’s rear wing – “rather than an intentional act or design” – the penalty was applied because there were no “mitigating circumstances”.

The stewards were also “fully satisfied” that Verstappen did not interfere with Hamilton’s car.