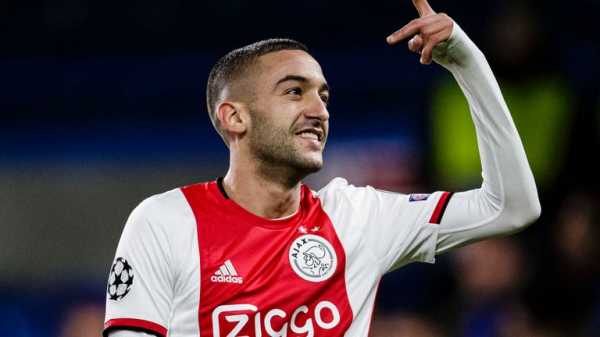 1:53 New Chelsea signing Hakim Ziyech is an ‘absolute gem’ and can light up the Premier League, according to Dutch journalist Marcel van der Kraan

It was clear last summer that Chelsea needed additional creativity, but so far this term, only Tammy Abraham has reached double figures for league goals (13), with Christian Pulisic and Mason Mount (five each) next on the list.

Ziyech provides creation in abundance. No player has created more chances or notched more assists in the Eredivisie over the past three seasons – but the Morocco international also offers firepower.

The shot map below shows the location of his shots in the league this season and reveals how he likes to strike from range, scoring twice from outside the box, but he can also arrive in the six-yard box to convert easier chances. 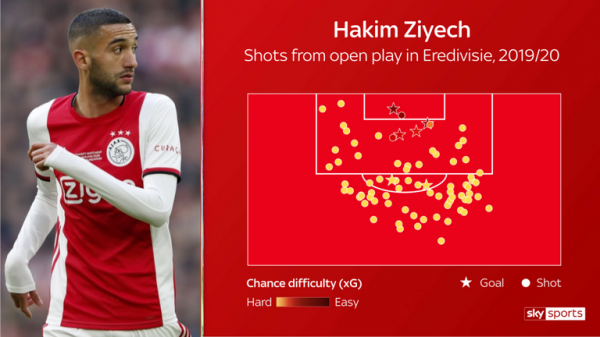 This week, it was revealed that Chelsea recorded the highest net-profit of any club in world football in the last two transfer windows, according to newly published data.

They spent just €45m (around £38m) to turn Mateo Kovacic’s loan from Real Madrid into a permanent deal – but the west Londoners made a further €205m (£173.7m) in player sales, stemming largely from the Hazard sale.

Having successfully appealed their transfer ban to the Court of Arbitration for Sport, Chelsea have identified Ziyech to fill Hazard’s boots.

“The player himself wants to sign for Chelsea. He was one of Frank Lampard’s top targets last month.

“Chelsea worked very, very hard to sign him in the January transfer window, but unfortunately Ajax insisted on keeping him because they’re top of the Dutch first division, they’re in the Dutch Cup and they’re in the Europa League. They didn’t want to sell him until the summer.” 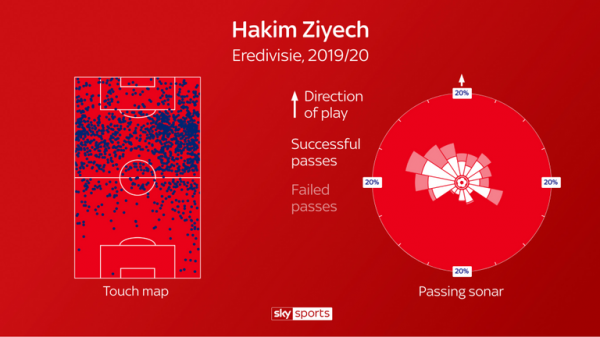 Ziyech, who plays predominantly on the right wing but can also play as a No 10, signed a contract with Ajax until 2022 in the summer.

The 26-year-old has scored eight goals and registered 21 assists in 29 matches across all competitions for Ajax this season.

Where would he operate at Chelsea? 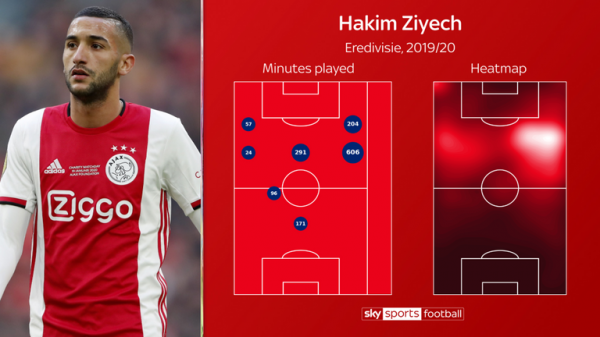 Hazard caused most of his damage in Chelsea blue cutting in from his favoured left-sided berth, shifting the ball from left to right on slaloming runs, but it is likely that Ziyech will compete with Callum Hudson-Odoi for a place on the right of the attack.

This is where the Dutch-born Moroccan has been played predominantly by Ajax head coach Erik ten Hag this season and during the club’s stunning run to the Champions League semi-finals last term.

Ziyech has been exceptional in this competition for Ajax. This campaign, only Chelsea’s Willian (19) created more chances than the 26-year-old’s 18. But their failure to reach the knockout stages means they will be in the Europa League later this month.

Last season, Ziyech was the eighth-most creative player in the Champions League, while only Lionel Messi (35) and Neymar (32) completed more dribbles than his 31.

He was one of the best players on the pitch when Ajax drew 4-4 at Stamford Bridge in November – providing two assists – and he put in two eye-catching performances in the Champions League semi-finals against Tottenham last season.

Ajax are used to selling their best players and it was always likely that Ziyech would leave this summer. Their loss is most certainly Chelsea’s gain.