By Simon Lewis in Melbourne

Joe Schmidt on Thursday recalled his Grand Slam-winning big guns to Ireland’s starting line-up for Saturday’s must-win Test against Australia as the tourists bid to keep the series alive in Melbourne.

Head coach Schmidt has also sprung a surprise at hooker where Munster’s Niall Scannell is handed a start rather than Sean Cronin, having been called into the touring party on the eve of departure from Dublin following the withdrawal of injured skipper Rory Best. In the backline, Andrew Conway is given a chance to stake his World Cup credentials on the right wing having missed the Six Nations through injury. 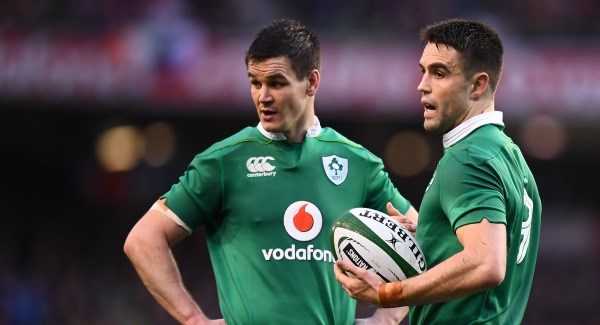 Schmidt had used his opening Test selection in Brisbane last week as an opportunity to further blood less experienced internationals against tier-one opposition and although they acquitted themselves well a Suncorp Stadium, the Wallabies struck the first blow with an 18-9 win.

Now 1-0 down in the series and with a record-breaking 12-game winning streak over, Ireland will welcome back PRO14, Champions Cup and Six Nations winners Johnny Sexton, Garry Ringrose, Tadhg Furlong, Cian Healy, Devin Toner and Dan Leavy to a starting line-up once again captained by flanker Peter O’Mahony.

“It is a good mix, but it’s also an opportunity for guys to make the most of their opportunity,” Schmidt said in Melbourne on Thursday.

“Johnny always brings organisation up front, so I know that he will be enthusiastic.

“Garry Ringrose fantastic job in last two games of Six Nations, he will be looking to hit the ground running.

“Andrew Conway didn’t get to play, he was injured in the Six Nations, but did a great job in November. It’s a great opportunity for him.

“Jacob (Stockdale) was a guy who didn’t train on Tuesday, he’s just a little sore. He’s fully fit but we’ll give Andrew an opportunity this week.

“Jordan gives us the cover in the back three and in the midfield as well, so hence he’s on the bench and we’ll give Jacob a chance to get himself right potentially for next week.”

There are eight changes to the XV for the match at AAMI Park, Keith Earls having completed his return to play protocols following a failed Head Injury Assessment last Saturday to retain his place with a positional switch from right to left wing.

Props Healy and Furlong move off the bench to replace Jack McGrath and John Ryan respectively, although while Herring reverts to the replacements having impressed as a starter last weekend, there is no place at hooker for the experienced Sean Cronin with the number two jersey instead going to Scannell.

Cronin appears to have paid the price for the scrum problems Ireland experienced in the second half when Australia won a penalty against the head in the 68th minute with the Wallabies trailing 9-8. Bernard Foley took the shot at goal and the home side never looked back, David Pocock adding the game-clinching try four minutes later.

Scannell is viewed as the better scrummager but is also heavier than Cronin, who at 100 kilograms was giving up 10 kilos to opposite number, fellow replacement Tolu Latu and would have been 17kg lighter than Australian starter Brandon Paenga-Amosa.

“Niall Scannell played right through Six Nations last year for us, so he’s a guy who, when he got his opportunity, when Rory Best was unwell and he did a super job for us,” Schmidt said.

“We’re giving him another opportunity to impress, with Niall – he’s a good scrummaging hooker and that will add a little bit to an area where we weren’t as strong as we normally are.

“With Niall, it is a real opportunity for him to probably galvanise that pack and take a step forward at scrum time.”

In the second row, Iain Henderson makes way for Toner and Leavy regains the number seven jersey at openside flanker at the expense of Jordi Murphy to rejoin Six Nations back-row regulars O’Mahony and No.8 CJ Stander.

Scrum-half Conor Murray is reunited with fly-half Sexton after a solid start last week from Joey Carbery as Ringrose comes into midfield at outside centre, pushing Robbie Henshaw inside to 12 and edging out Bundee Aki. Conway joins a back three with Munster team-mate Earls and full-back Rob Kearney.

“A couple of guys are carrying niggles,” Schmidt said. “Bundee Aki has that ankle and that’s kind of niggled away at him. He is able to play, but we’ll leave him out this weekend.

“Iain Henderson twisted his knee a little bit, again it’s just niggly. There’s a few other guys who didn’t train on Tuesday, they were just a bit sore really. It was relatively physical game last week, some of those contacts.”

There is a new-look to the Ireland bench with only outside back Jordan Larmour retained from the first Test in the week of his 21st birthday. Herring, McGrath, Henderson, Murphy and Carbery go from starters to replacements while there are opportunities in this middle Test for tighthead Andrew Porter, a regular feature in Six Nations matchday squads, Ulster scrum-half John Cooney, who comes as back-up to Murray in place of Kieran Marmion, and the potential of a debut for Scarlets’ Munster-bound lock Tadhg Beirne.

Having played 2200 minutes for Scarlets this season Beirne has played considerably more than the rest of the Ireland squad, who operate under the IRFU’s player welfare management protocols, but Schmidt said of the former Leinster academy member: “He has got good energy, he obviously has good instincts on pitch.

“We’ve seen that over course of this season and last, particularly in the end-game of last when he played superbly in the semi-final and final of PRO14.

“We’re looking forward to seeing him out there, he brings a big engine to the job. He just keeps going.

“I do think that the pace of the game is something he’s used to, way Scarlets play, hopefully allows him to settle right in pretty quickly.

“He’s had a week with us to…. he’d had one training prior to coming on tour, so to have had last week to settle himself and orientate himself and fit in.

“This week now he might get the opportunity for him to do that and then step out and potentially make his Test debut.”

While it was all change for Ireland, Wallabies head coach Michael Cheika on Thursday named the same 23 which did him and Australia proud in Brisbane with Michael Hooper once again captaining a side which outscored the tourists by two tries to one.