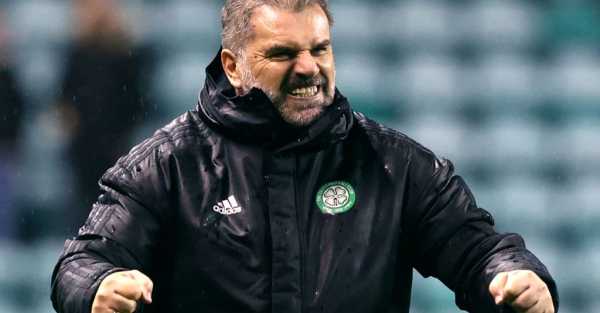 Ange Postecoglou hailed Celtic’s first-half performance against Hibernian as their best during his time in charge of the club.

The Hoops raced into a three-goal lead through Tony Ralston, Cameron Carter-Vickers and Kyogo Furuhashi in the opening 30 minutes as they won 3-1 at Easter Road.

They had further chances before the break to make the scoreline more comprehensive, and Postecoglou was delighted.

He said: “The first half was outstanding, probably the best football we’ve played all year, especially away from home against a good team. The second half was a bit different.

“We had to defend a bit more because they opened up and threw more bodies forward. Joe Hart had to make one good save in the second half but I thought we handled it well. There were positive signs in both halves about the team we want to be.”

The win – their fifth in succession – took Celtic within two points of Rangers at the top of the cinch Premiership.

Postecoglou insists the buoyant scenes in front of the travelling support at full-time had nothing to do with the Ibrox side dropping points against Aberdeen.

He said: “We’re happy because we’ve won at a difficult place and had a good performance. It’s always great to send our fans home happy. It’s important to repay them and that’s why we acknowledged them at the end.

“It’s helping us now that we’re a lot more settled and we’ve got some options within the 11 and being able to change the team. We’ve just got to keep improving. This was a good performance but we know we can still do better.”

Postecoglou praised goalkeeper Hart for excellent saves in each half to deny Joe Newell and Jamie Murphy.

He said: “Joe had to make a couple of saves tonight but that’s why he’s there. He’s an outstanding goalkeeper and an important part of our team because for the most part we’re dominating games and you need a keeper who can make those one or two big saves, and Joe did that tonight.”

Hibs boss Jack Ross admits his side’s dire first-half display killed their chances of getting a result. The Easter Road side have now lost four games on the spin.

Ross said: “The first half was really poor, second half we were really good. That first-half performance ultimately cost us the game. We need to start producing performances like the second half, starting on Saturday against Ross County.”