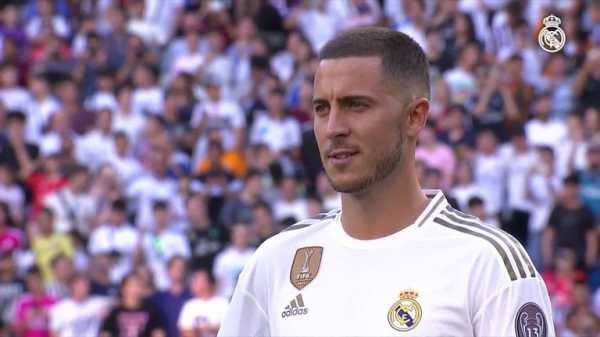 1:39 Tim Thornton reports from the Bernabeu as Eden Hazard is presented to the Real Madrid supporters

Fast forward eight months, however, and Hazard’s brutally honest assessment of his debut season at the Bernabeu pulled no punches: “My first season at Madrid is bad,” he told RTBF.

“It is an adaptation season. I will be judged in the second. It is up to me to be in good shape next year.”

Here, we look at why it has it not quite gone according to plan for the Belgian at his new club. 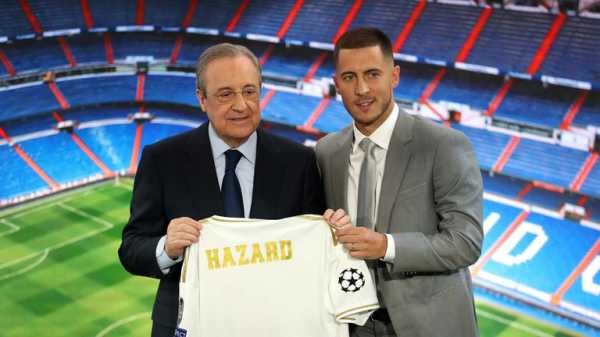 When Cristiano Ronaldo decided to end his trophy-laden, nine-year association with Real and join Juventus in the summer of 2018, those in charge of recruitment at Madrid were left with a cavernous hole to fill.

To be precise, a void measuring 450 goals.

However, despite being made to wait, Real president Florentino Perez eventually got his man, with Hazard taking the No 7 shirt vacated by the five-time Ballon d’Or winner.

“Taking this shirt after Cristiano isn’t easy, he’s historic,” admitted Hazard on his arrival in Spain.

And so it has proved, although Arsene Wenger thinks it was unrealistic in the first place to expect the new man to get the sort of goals tally Ronaldo used to rack up every season at the Bernabeu.

“He will be the answer, but not in replacing Ronaldo that is for sure,” the former Arsenal manager told beIN Sports.

“He will not score 50 goals a year because that’s now how they [Real Madrid] play football. They need another goalscorer… if they had someone younger around him to score the goals, maybe they could do very well.

“Hazard is an exceptional player to create chances, and to sometimes finish, which is what he needs to do in big games. I don’t think Real have yet to see the real Hazard.” 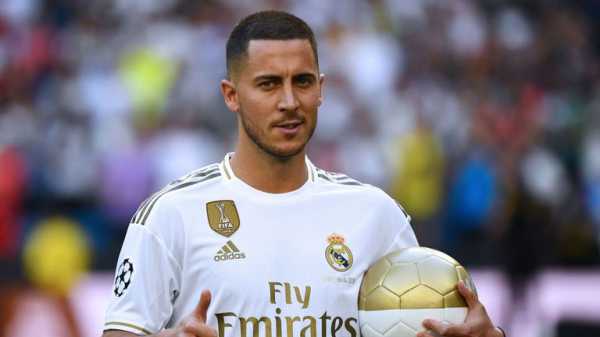 1:13 Hazard says he felt like a kid during his unveiling at the Santiago Bernabeu following his transfer from Chelsea to Real Madrid

When Hazard joined the biggest club in the world, he was also becoming their latest Galactico, six years on from the previous big-money arrival at the Bernabeu, Gareth Bale.

However, much like the Welshman before him, Hazard is not one for the spotlight, preferring instead to do his talking on the pitch, where he feels most at home with a ball at his feet.

And when not playing football, Hazard can be found with his family – wife Natacha and three sons – in the private neighbourhood of La Finca in Madrid’s suburbs.

Slightly different, then, from the club’s previous Galacticos, stars like David Beckham, Robinho, Ronaldo et al, who all enjoyed the media limelight while in the Spanish capital.

Hazard is a very different character, though, as he hinted at during his unveiling: “I’m not a Galactico, but I’ll try to be. For now, I’m Eden Hazard.”

But will that be enough for Los Blancos? 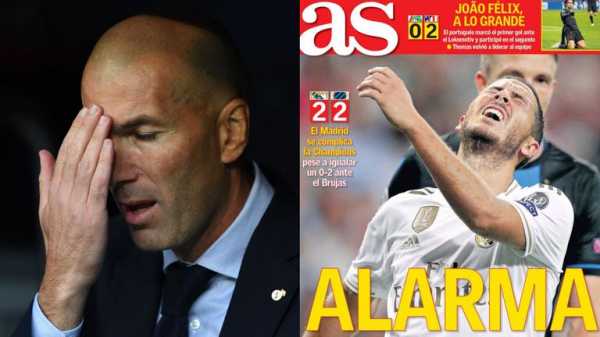 One criticism Hazard found hard to shake off in the early part of his Madrid career was that he turned up for preseason at his new club overweight after a family holiday last summer.

It is not an accusation the player denies either.

“I had put on five kilos, I’m the type to put on quickly and lose so quickly if I’m careful.

Some of the Spanish press, who as Bale can testify can be hard to please at the best of times, went as far as labelling the new man fat.

Hazard’s national team manager was even forced to defend his charge, with Roberto Martinez saying: “He takes great care of himself and, in my eyes, he’s not fat.”

Untimely injury and a slow start 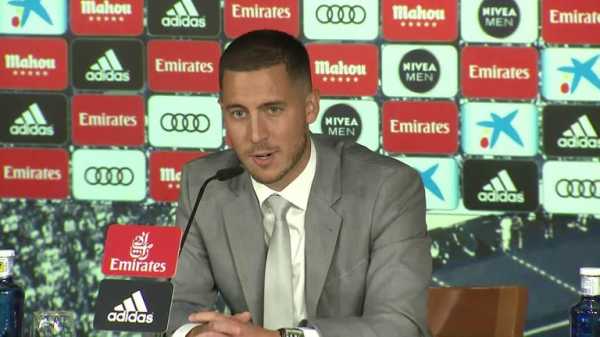 However, that extra timber Hazard was carrying in the close season may have led to the thigh injury he picked up in the last training session before Real’s first match of the campaign at Celta Vigo, as well as a subsequent loss of confidence in his game.

Wenger certainly thought so, observing: “If you want to make a horse lose a race, putting two kilos on a horse of 500 kilos is enough.”

As a result, the new man’s competitive debut was delayed by three games until September, with head coach Zinedine Zidane forced to call for patience from Madrid’s fans.

“I know he is going to succeed here,” the Frenchman said. “I’m not going to give him any advice on how to play. He knows what we want from him and we know the player he is. We all have to remain calm, I’m not worried at all.”

But with Real’s new big-money recruit failing to score in his first five games in all competitions, Marca noted only Michael Owen had made a worse start to life as a Galactico after the Englishman took seven matches to get off the mark at the Bernabeu.

“It is true that the people expect a lot from me, I also expect it,” said Hazard. “Personally I can do better. There will always be criticism, I am with myself.”

Luckily for the Belgian, he finally scored his first goal for his new club in a 4-2 home win over Granada in October, meaning he beat Owen’s unwanted record by one match.

One step forward, two steps back 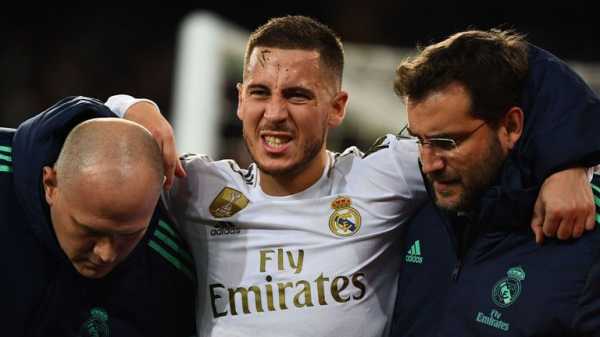 Hazard knew he had to up his game, though, in order to justify the money Real had forked out on him.

“I was not good, simply,” he admitted in November. “I said to myself ‘start playing well.’

“The first two months, in what I was proposing, it was not enough. I thought, I can do better.

“I do not do everything right, but I try. The first two months, I said to myself ‘you’re new, be simple’. Too many passes, people waited for me to dribble.”

However, things were looking up after an impressive showing in a 4-0 win at Eibar later that month, one that even had AS pronouncing: “Hazard has finally arrived” on its front cover.

This was the Hazard everyone was expecting in Spain, only for the playmaker to then sustain an ankle injury in a Champions League group game against Paris Saint-Germain that saw him sidelined for 16 games. 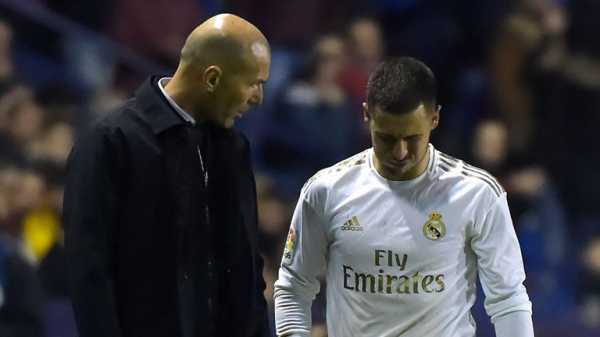 Hazard was out of action until February before finally making his long-awaited comeback against Celta, with the player’s eye-catching 73-minute display earning him a standing ovation from the Bernabeu.

Six days later, though, and the player was back in the treatment room after suffering a broken ankle in Real’s shock 1-0 loss at Levante as the injury curse struck again.

And incredibly, Hazard has actually now missed more games with injury in his curtailed debut season at Real than he did in his entire seven-year Chelsea career.

“He is fully adapted to the league and Madrid,” said Martinez. “His only problem has been injuries. He has been very, very unlucky.

“Luck plays a huge role in football and I am convinced that very soon that luck will change, and he will be able to be a decisive and stellar player.” 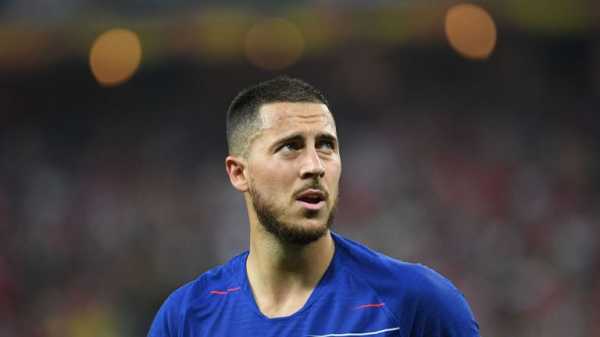 Of course, Hazard would not be the first player who needed time to adjust to a new team, country and league.

Pep Guardiola, though, is adamant the Belgium international is too good not to succeed in Madrid.

“If he’s not playing well, something’s going on at Madrid because he is really good,” said the former Barcelona player and manager.

“Not a top player, another level above. What we saw in England… he is world-class. But the whole world knows that you need a period of adaptation.” 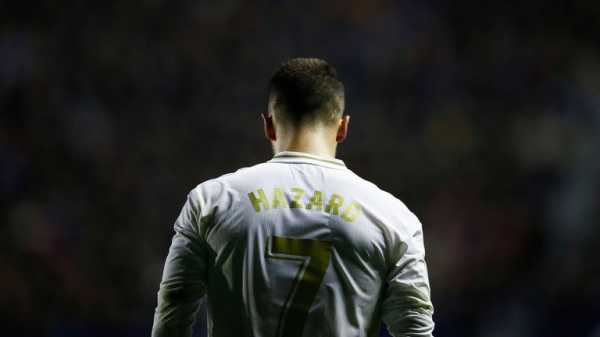 So what do Real’s notoriously hard-to-please fans make of Hazard’s first season in Madrid?

“The fans’ verdict is that the player has been a 5/10 so far,” says Spanish football writer Alvaro Montero.

“The thing is, due to the injuries he cannot be correctly evaluated, but Real fans were very happy with him before he got injured a second time.

“Madrid supporters agree that Hazard should be judged during his second season, because it is almost impossible to do it this season.”

However, Montero says Hazard must improve his goal threat next season if the player wants to be considered a success at the club.

“Next season, though, he does need to be more creative and dangerous in attack, so more assists and scoring more goals,” he says.

“He has scored just one goal all season. Real fans do not expect him to be Ronaldo, but they do expect him to score, say, 15 goals during the whole year.”