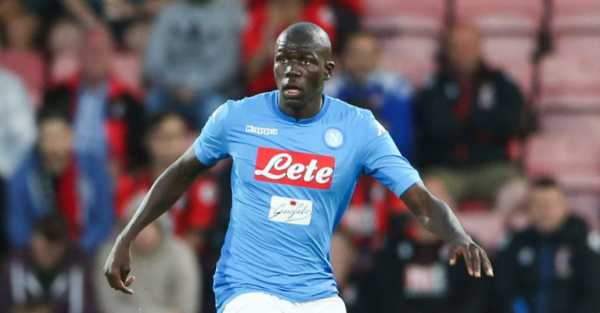 New Chelsea signing Kalidou Koulibaly has vowed he will never let anyone stop him representing Senegal.

The Senegal captain called for more respect of African nations after the president of his former club Napoli threatened only to sign African players willing to give up international ambitions.

Aurelio De Laurentiis pledged that Napoli will only now sign African players if they are willing to miss the Africa Cup of Nations, given the tournament clashes with European league competition.

The 31-year-old insisted he would respect De Laurentiis’ pledge on African players, but urged European teams to do likewise to the Africa Cup of Nations.

“So, if someone told me to do that, it would be the only time that I can fight with somebody.

“The way we feel all the time with my national team, we are all respectful, we wait for players to come from the Premier League, and everybody is happy to be here.

“Everybody thinks the same as me in the national team. If someone told them not to come they would always fight to come.

“This is the most important thing. Everybody has to give us respect.”

Napoli chief De Laurentiis this week lamented the time African players spend away from the Italian season competing in tournaments like AFCON.

“We are the idiots who pay salaries only to send them all over the world playing for others,” he said.

When asked for his opinion on his former club president’s views, Koulibaly said: “It’s up to him, if he wanted to say this.

“But for me the most important thing is to respect everybody.

“It’s true it’s difficult for them, but I think you have to respect the national team also.

“You have to have respect like you have of European national teams.

“As captain of Senegal it’s not a good way to speak about African nationality, but I respect what he thinks.

“If he thinks that, it’s up to him, but I think not everybody has the same idea as him in the club. The supporters don’t think like this.

“It’s up to him, it’s not an idea of the society or the city, the city is respectful of everything.

“This world, it’s what he thinks, not what the team thinks or what the city thinks.”

Chelsea have tracked Koulibaly since 2015, finally getting their man this summer.

The Senegal captain will help shore up the Blues defence after the departures of Toni Rudiger and Andreas Christensen.

Koulibaly asked John Terry for his blessing to take the former Blues stalwart’s number 26, revealing he had wondered whether the number had been retired at Stamford Bridge.

“I wanted to know which number was free, I was sent some numbers and I wasn’t sent the 26,” said Koulibaly.

“So I was asking myself, ‘is it retired or does nobody want to take it?’.

“So I asked Gianfranco Zola, because I know him very well and have been asking him so many questions.

“I asked him for John’s phone number because I wanted to ask him about the jersey.

“I called John and at the beginning he didn’t believe it was me, he thought it was a joke. So he called the team manager to ask if it was really me.

“And when he said yes I was very happy, because I know what he did for the club and for the supporters here.

“He give me his answer and I was happy, so I wanted to tell everybody that I ask him before, because I didn’t want to disrespect a legend of the club.”