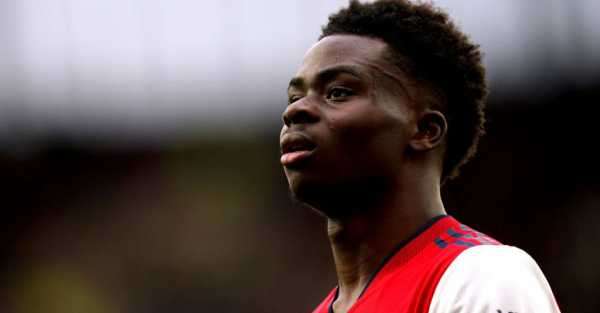 Arsenal boss Mikel Arteta claimed Bukayo Saka’s penalty miss at Euro 2020 was “great for his career” after the England international scored one goal and set up another in the 3-2 win at Watford.

Saka provided the assist for Martin Odegaard’s early opener at Vicarage Road, which was soon cancelled out by Cucho Hernandez’s overhead-kick.

The Arsenal academy graduate then restored his side’s advantage after a well-worked one-two with Alexandre Lacazette, before Gabriel Martinelli added a third.

The Gunners looked to be cruising before Moussa Sissoko pulled a goal back in the 87th minute, but the Hornets were unable to find an equaliser.

“I think Bukayo had an experience in the summer that not a lot of players would ever have and I think it was great for his career because the football world showed how much they like him and how much they respect him,” Arteta said.

“I think that was a big boost for him to realise in difficult moments that people are going to give him support, and the club did exactly the same as his team-mates.

“Then it’s about giving him that space. What he is already doing is phenomenal and he needs that room. Don’t read too much, do what you do.

“Football is his priority in life and you can see that every day in training and he needs to continue to behave and live the way that he is doing.”

Arteta believes Saka, who has enjoyed an impressive season so far, is better for the experience.

“I think so,” Arteta added. “I think experiences like that mark your career. And what you learn from those difficult moments is much more probably than if you had scored that goal.”

Watford manager Roy Hodgson said he could not have asked for any more of his players after they pushed the Gunners all the way and scored two goals for the first time since November.

“This is Watford at the bottom of the table against Arsenal,” said Hodgson. “They haven’t lost a game since goodness knows when, they’ve got about two games in hand and they are one point behind the top four in the country.

“We always knew that we were going to have to pull out a lot of stops to get something from the game. I don’t think I can ask any more from the players and what they gave Watford Football Club and the fans today, I really don’t.”