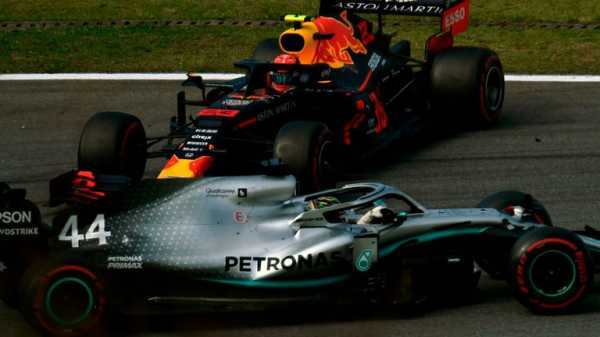 1:38 Sky F1’s Karun Chandhok is at the SkyPad to look at Alex Albon’s restart, and his subsequent collision with Lewis Hamilton.

So close to a first F1 podium for Alex Albon, who had another up-and-down weekend. He was off the pace compared to Verstappen throughout, 0.4s off in qualifying, and half a minute down in the race before the Safety Cars. But then his race came alive, and upon the first restart he showed that fearless racing Red Bull love.

Albon darted around the outside of Sebastian Vettel and was then hunting down Hamilton before the next stoppage, after which he was holding his own with the Mercedes before he was taken out. So cruel, but Albon will surely get many more podium opportunities.
​​​​​​​Rating out of 10: 8

A bizarre race for Nico Hulkenberg, who just couldn’t find pace after starting 13th. “I don’t really know what happened today and I just couldn’t seem to make progress,” said the German, who is set to bow out of the sport after Abu Dhabi.

He got ahead of Russell early on but then normality resumed for Robert Kubica, who is facing a qualifying whitewash at the hands of his rookie team-mate.
​​​​​​​Rating out of 10: 5

1:39 The Ferraris of Charles Leclerc and Sebastian Vettel collide with each other taking both out of the Brazilian Grand Prix.

Oh, Seb. He was on form again in qualifying, and nicely poised in the race, but his Sunday ended in drama. You could sense that Sebastian Vettel, who started second but quickly dropped back to third, was frustrated even before his skirmish with his team-mate, as Ferrari chose not to pit him under the Safety Car for fresh tyres.

That meant he was under threat from Albon, who passed him at the first time of asking into T1, and then Leclerc. Leclerc also got ahead at that corner, but Vettel got a much better run on the backstraight and the overtake was most certainly on. Although Ferrari won’t blame either driver, yet, for the subsequent clash and double puncture, if anyone was at fault it was surely Vettel, who edged over the left towards Leclerc, seemingly trying to squeeze him into the next corner but not realising how close he actually was. An avoidable collision, and more unwanted scrutiny for F1’s four-time champion.
​​​​​​​Rating out of 10: 6

After starting 14th, Charles Leclerc impressively charged through the midfield with plenty of passes into T1, which is where he also got ahead of his team-mate. Soon after, his race was over. Credit to Leclerc as he handled his post-race interviews with maturity, but he must be bitterly disappointed as a podium was well and truly on here.
​​​​​​​Rating out of 10: 7

Lance Stroll, knocked out in Q1 again, was in a decent position after the first Safety Car in the race, sitting just behind Carlos Sainz. However, he was forced to retire after picking up damage when running over the Ferrari debris.
​​​​​​​Rating out of 10: 5.5

Valtteri Bottas was off the pace all weekend compared to Hamilton and it was his stoppage that led to the first Safety Car and a bonkers end to the race. That was Mercedes’ first reliability-forced DNF of the season.
​​​​​​​Rating out of 10: 6