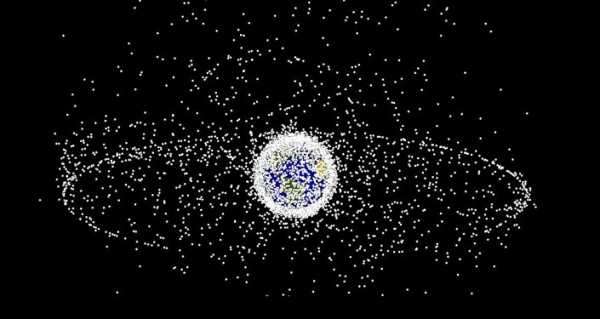 There are an estimated 160 million pieces of so-called “space junk” left floating around in the wake of missions, ranging from large spent rocket stages to tiny paint flakes. As they travel at a speed of above 16,777 mph (27,000kmh), the fragments can potentially seriously damage or destroy space infrastructure.

The International Space Station (ISS) and the future of space exploration are under a very real threat from ‘zombie satellites’ and diverse debris, writes The Telegraph.

High-value craft in low-Earth orbit, such as the ISS, could be destroyed by a rogue piece of junk, with the problem so acute that the space outpost might even have to be abandoned if the debris is not cleared out of the way, UK Business Secretary Alok Sharma has warned.

As he urged mankind to “clean up our act”, the official announced new funding to track floating debris, left orbiting the Earth in the wake of a diverse array of missions.

£1million in investment is being channelled via the UK Space Agency (UKSA) towards seven space-cleaning programmes that will be tackling the rogue debris.

Astronomers estimate that around 160 million pieces of debris are floating around Earth, trapped by the planet’s gravity.

Travelling at a speed of approximately 29,000 km/hour (18,000 mph), almost one million fragments are believed to be larger than 1 cm in diameter and present a devastating threat to satellites in the event of a collision.

As a graphic example, a close call was cited from 2019, when a spacecraft operated by the European Space Agency (ESA) needed to dodge a £100 million Starlink satellite.

Furthermore, the experts warn that the impact might trigger a chain reaction that would knock out numerous satellites.

As there is no way of precisely monitoring small pieces of debris potentially on a collision-course with some pricey space infrastructure, with several mega-constellations due for launch, potential incidents could have catastrophic fallout for life on Earth.

​There is no underestimating the implications of such a scenario, underscore experts, as modern society relies on satellite services for GPS, mobile communications and weather forecasting.

Currently, only the largest items in orbit can be traced.

However, it is hoped the new programmes will remedy the situation by employing lasers, satellites and artificial intelligence.

Dubbed ‘Lift Me Off’, one of the new projects will create an AI-powered algorithm to differentiate between junk and currently operating satellites.

Lumi Space, another project, will resort to lasers in tracking and mapping objects.

Companies Deimos and Northern Space and Security will develop cutting-edge optical sensors to track space objects from the UK, while Andor, based in Northern Ireland, will update its astronomy camera to track ever-smaller sized debris.

Graham Turnock, Chief Executive of the UK Space Agency was cited as saying: