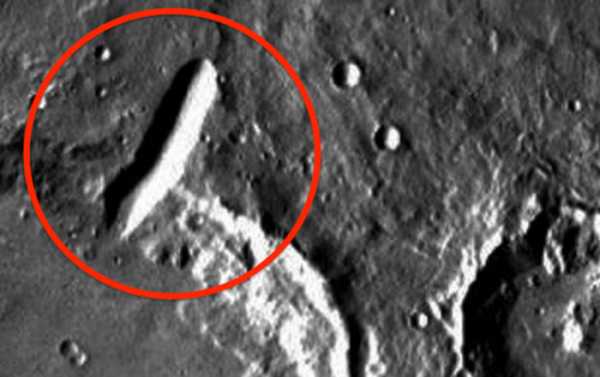 Scott C. Warring, the founder of the UFO and paranormal news blog ET Data Base, believes he has found evidence of intelligent life on Mars: a pyramid with a door and a weird elongated “building”.

Lurking through satellite pictures on Google Maps, alien enthusiast Scott C. Waring spotted what he called non-natural – and possible alien-made – structures on the surface of Mars.

The first one looks like a long curved white object lying across the edge of a crater. He described it as a “long tall building” around 10 kilometres long, with a “small tower on its slope”.

Waring has darkened the screenshot to make the object more visible; the image in original settings makes it more likely that the feature is not elevated above the surface and actually is an extension of the crater. The shadow it presumably casts could be the dark side of the extension, judging by how other objects reflect the sunlight.

To the right of that object, Waring spotted a rectangular feature around 5km across and 4km wide. Inside it there is a darker, oval-shaped hole – something he called a door into the mountain.

“This doorway is big enough for ships to enter and exit,” the alien hunter said. “But what looks like a door may be a tinted window for a city that may exist inside this pyramid.”

“It’s wide open, or there might actually be a tinted clear cover over it. It’s hard to tell for sure, but it’s definitely an opening.”

Waring has previously made a number of outlandish claims about the presence of intelligence life on Mars, the Moon, and the asteroid Bennu. NASA typically attributes such statements to the effect of pareidolia – the tendency for to perceive a meaningful shape in a random or otherwise unrelated visual pattern.

Study Shows Hydroxychloroquine Does Not Protect from COVID-19

‘A Big New Idea’: Mars Had a Ring According to Scientists Studying the Red Planet’s Smaller Moon