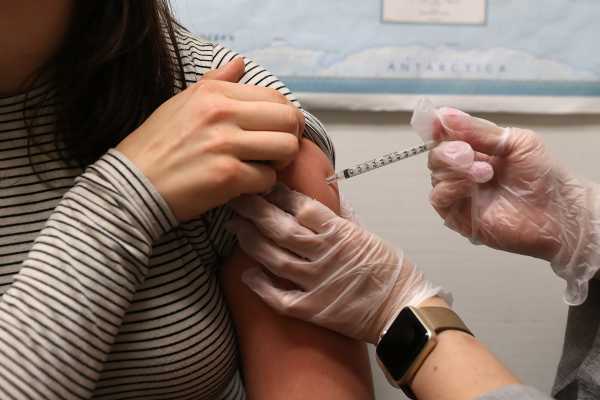 The first indication of how well the flu vaccine is working this season in America just came out — and it may help explain why this year’s flu season is milder than last year’s.

The Centers for Disease Control and Prevention measure the vaccine’s effectiveness by looking at how many people are showing up in doctors’ offices and hospitals with flu, as well as tallying up flu-related hospitalization and death numbers.

According to the February 15 Morbidity and Mortality Weekly Report, people who’ve gotten the shot this season reduced their risk of needing medical care for serious flu complications by about half. For context, last year’s flu shot cut people’s risk of infection from the most commonly circulating influenza strain by only a quarter. It was also one of the worst flu seasons in recent memory, when influenza-associated deaths reached 80,000 (more than from traffic collisions, gun violence, or opioid overdoses).

The flu vaccine’s effectiveness changes every year because the circulating flu strains change — along with the recipe for the shot. Ahead of flu season, public health agencies make educated guesses as to what strains and mutations they think will make the rounds. As you can imagine, this is no easy task. And they don’t always get it right.

In a good year, the flu shot’s effectiveness hovers between 50 and 70 percent. So this year’s early vaccine data suggests it’s shaping up to be a milder season — and even more so for one of the groups that’s most vulnerable to flu: children.

Among kids 6 months to 17 years old, the vaccine’s effectiveness so far this year is 61 percent. Considering how deadly influenza can be in little ones, that finding is encouraging, and it’s a reminder to take your kids to get the shot if you haven’t already. (We’re still in the midst of peak flu season, which can run as late as May.) Here are three things parents should know about influenza and the flu vaccine.

1) Flu comes on a lot faster than a cold

Seasonal flu is a respiratory disease that can cause fever, chills, headache, malaise, muscle pain, cough, and a sore throat. These symptoms come on really fast — within 24 hours or so — and should improve over the course of a week (but can last a little longer in young ones). Kids with flu may also experience vomiting, diarrhea, nausea, and stomach pain.

Since flu is sometimes confused with the common cold, the CDC has a very useful infographic to help tell the difference:

For most kids, flu doesn’t come with serious complications and can be treated at home with lots of rest and fluids.

But there are some groups who should get medical attention sooner if they have the flu. Children under the age of 5 — and especially those under 2 — are considered particularly vulnerable to serious flu-related complications, such as pneumonia or encephalitis. And according to UpToDate, the evidence-based physician’s resource, these medical conditions also put children and adults at high risk of flu complications:

So if your child is under 5, and/or has any of these conditions, and you suspect he or she has the flu, you may need to seek out medical care immediately.

While flu deaths are uncommon, even children with no underlying medical conditions are still at risk of death from flu. “They are young and immature — immunologically speaking — when it comes to dealing with influenza,” Wendy Sue Swanson, a pediatrician and a spokesperson for the American Academy of Pediatrics, told Vox last year.

In one study that looked at pediatric flu deaths in the US between 2004 and 2012, 43 percent occurred in children with no high-risk medical conditions, while 33 percent had neurological disorders and 12 percent had genetic or chromosomal disorders. Those findings were reaffirmed in a February Pediatrics study, which looked at the 2010-2016 flu seasons.

In all children, there are other warning signs to look out for that may necessitate medical care fast.

If your child keeps getting worse, not better: Children with flu should gradually improve during the course of a week (though symptoms can last longer). But if their symptoms worsen over time — the fevers or pain are getting more serious each day — you may want to seek immediate medical attention.

If your child recovers, then gets sick again: Every year, about half of pediatric flu deaths are in otherwise healthy children, and Swanson said she’s been hearing anecdotal reports that some of the deaths this year involved kids who got over the flu but then got sick again from another secondary infection. “That tells me they had a viral infection from flu, their body did a decent job of trying to get rid of the virus, but in that process, they got set up for secondary infection — severe ear infection or pneumonia,” Swanson said. So if your child is getting better and then takes a turn for the worse, see a doctor.

If your child has any of these other emergency warning signs from the CDC:

In infants, warnings signs include:

“If your child is not staying hydrated, can’t keep anything down, or has a febrile seizure — or if something is really different than a regular cold — trust your instinct,” Swanson added. “It’s worth getting seen right away.”

If your child didn’t get the flu vaccine: Flu vaccines, while imperfect, can minimize the risk of getting the flu and reduce the severity of the disease, and this can be especially important for vulnerable groups like children. In one study of pediatric flu deaths and vaccination status, researchers found that only 26 percent of those who died had gotten the vaccine. Last year, 80 percent of pediatric deaths occurred in children who were unvaccinated, according to the CDC.

This flu season, 28 children have died from flu-related complications so far, and only three of the 22 who died from flu and were eligible for the vaccine had been fully vaccinated.

Unfortunately, there’s no surefire cure for the flu. Antivirals don’t always work well but are most effective when started within 48 hours of onset of flu (and are recommended for high-risk groups, like young children). Otherwise, lots of rest and fluids are essential, and over-the-counter painkillers like acetaminophen or ibuprofen can manage pain and fever. (Vitamin C doesn’t really help.)

So look out for the warning signs, but remember: The vast majority of kids with flu, like most adults, will get over it.