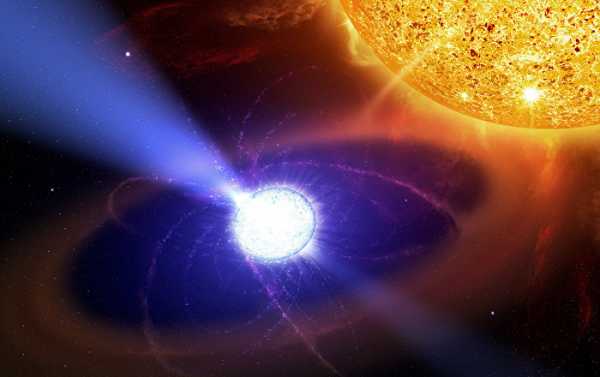 “Frame dragging” is one of the predictions of Einstein’s general theory of relativity, according to which a rotating object drags the surrounding space-time around with it in an effect that is so negligible in everyday life that it is undetectable.

Fascinating new research published on 31 January in Science has revealed fresh evidence of the phenomenon called “frame-dragging” on a much more noticeable scale that usual, using a radio telescope and a pair of compact stars spinning around each other at great speeds.

In the paper, entitled “Lense–Thirring frame dragging induced by a fast-rotating white dwarf in a binary pulsar system”, a team of scientists led by Australian Professor Matthew Bailes, from the ARC Centre of Excellence of Gravitational Wave Discovery (OzGrav), and Vivek Venkatraman Krishnan from the Scientific staff of the Max Planck Institute describe how they tracked the orbit of the two stellar orbs, officially called PSR J1141-6545, which offered an ideal natural gravitational laboratory.

General relativity serves as the foundation of modern gravitational theory, as it explains the motion of stars, planets and satellites, and even the flow of time.

One of the lesser-known predictions of Albert Einstein’s general theory of relativity is that a spinning object drags the very fabric of space-time in its vicinity: the faster the object spins and the more massive it is, the more powerful the drag.

Just two years after Einstein presented his general theory of relativity to the world, two other physicists, Josef Lense and Hans Thirring, predicted that masses in spacetime could deform spacetime in more than one way.

The Universe offers scientists naturally occurring gravitational laboratories where they are able to witness proof of Einstein’s predictions at work.

A very relevant subject for such studies is a white dwarf and its orbiting stars called pulsars.

White dwarfs, remnants of dead stars, can spin very quickly, rotating every minute or two, rather than every 24 hours like Earth does. The frame-dragging caused by these orbs is roughly 100 million times as powerful as Earth’s.

Twenty years ago, CSIRO’s Parkes 64-metre radio telescope discovered the stellar pair consisting of a white dwarf and a radio pulsar. The white dwarf is the size of the Earth but 300,000 times its density. The pulsar, only 20 kilometres in diameter, is about 100 billion times the density of the Earth.

The latter was recorded as spinning 150 times every minute, offering a “lighthouse beam” of radio waves sweeping past a vantage point on Earth as the team of astronomers launched their observation of the two stars.

The scientists mapped the path of the pulsar as it orbits the white dwarf, by timing when its pulse arrives at the telescope and knowing the speed of light.

The study revealed the two stars orbit one another in less than 5 hours.

Since 2001 the team of scientists would visit Parkes several times a year to map this system’s orbit.

The data led the team to suppose they were observing the “frame-dragging” phenomenon in action.

Another member of the team, Dr. Paulo Freire, says:

As the spinning white dwarf drags space-time around with it, it makes the pulsar’s orbital plane tilt as it is dragged along. This tilting is what the team immediately took note of.

This is an artist’s impression of a white dwarf (burned-out) star accreting rocky debris left behind by the star’s surviving planetary system. It was observed by Hubble in the Hyades star cluster. At lower right, an asteroid can be seen falling toward a Saturn-like disk of dust that is encircling the dead star. Infalling asteroids pollute the white dwarf’s atmosphere with silicon.

Thus the team of astronomers concluded that they had observed Lens-Thirring precession, a prediction of General Relativity, for the first time in any stellar system.