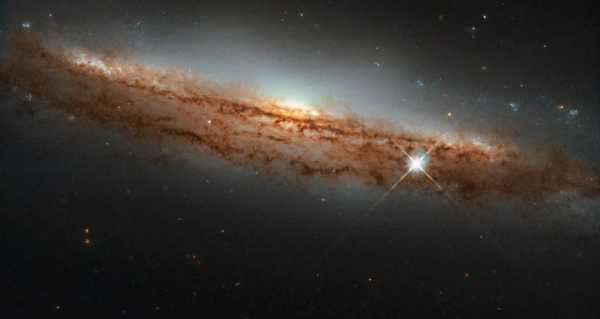 Simulations have long suggested that gargantuan galaxies must have been receiving cold gas from dark matter filaments, but their origins, and details of the chemical composition of these infusions have hitherto been unknown to science.

A group of scientists led by Hai Fu, an associate professor of astronomy at the University of Iowa, has discovered what they dubbed as “a pipeline” gas filament nourishing SMM J0913 – an enormous galaxy that came into being when the universe was 2.5 billion years old, about one fifth of its current age.

As follows from a study, published in the Astrophysical Journal, the discovery confirms old models that assume that the material needed to form stars is delivered to huge galaxies via these gas filaments, as unlike previous studies, the researchers managed to capture and look into in-depth chemical information on the “pipelines”.

Using spectral data obtained by the Atacama Large Millimetre/submillimetre Array (ALMA), the largest radio telescope on Earth, the team looked into the mass of the chemicals present in the filaments.

They appeared to lack heavy elements such as iron, carbon, and aluminium, but since the environment inside massive galaxies like SMM J0913 is constantly being refilled with heavy elements in the wake of the explosion of stars, this led researchers to believe that the gas was being piped in from outside the galaxy.

Recent cosmological research suggests that the universe may be closer to collapse than previously thought.

A variety of simulations have proposed that it is the filaments that can explain how cold gas makes its way to the inside of galaxies without getting disrupted by the surrounding hot flows.

Detecting these streams was a tough task to complete, the researchers explained, saying they had combed through the studies of 70,000 galaxies over the past five years before they stumbled upon the long-sought system that contained SMM J0913.

Its “full physical extent” remains to be analysed, the researcher said, which he hopes to set about in March, making use of the Hawaii-based Keck Observatory.