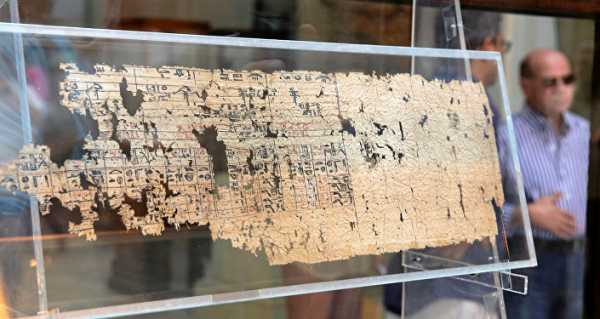 The recipe of the Egyptian ink in question can reportedly be related to the painting practices that were developed during the Renaissance.

A team of researchers from the European Synchrotron Radiation Facility (ESRF) in Grenoble, France and the University of Copenhagen, Denmark has managed to gain new insights into the nature of the inks that were used in ancient Egyptian papyri dating back to 100-200 AD, phys.org reports.

According to the media outlet, the scientists employed ESRF’s X-rays in order to study the red and black ink in papyri from “the only large-scale institutional library known to have survived from ancient Egypt”: the Tebtunis temple library.

As Cotte explained, one of the discoveries they made was that lead was actually added to the ink mixture, “not as a dye, but as a dryer of the ink, so that the ink would stay on the papyrus”.

The media outlet also notes that the recipe of the ink can apparently be related to “pain practices” that were developed during the Renaissance, centuries after the creation of the papyri in question.

And while scientists established that the red colour in the ink was produced by ochre, that pigment is “present as coarse particles” whereas the lead compounds are “diffused into papyrus cells, at the micrometer scale”, thus producing “a coffee-ring effect around the iron particles, as if the letters were outlined”.