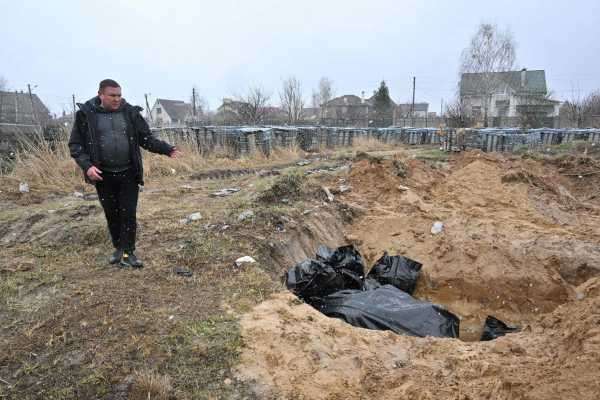 As Russian forces withdraw from Kyiv and surrounding areas, evidence of grave atrocities, including summary executions of civilians, a case of repeated rape, and other allegations have emerged through photographs and eyewitness and survivor accounts.

Horrific photos of civilian corpses — some with their hands tied behind their backs — clearly show the brutality of the Russian occupation in the areas near Kyiv, Chernihiv, and Kharkiv. Russia agreed to withdraw forces in the north of Ukraine during ongoing negotiations to end the fighting, while more than 2,000 incidents of violations of the laws and customs of war have been reported to Ukrainian Prosecutor General Iryna Venediktova’s office thus far. The visceral, grim photos coming out of the town of Bucha in particular are a potent indicator of just how much damage Russia has done during the brief conflict. 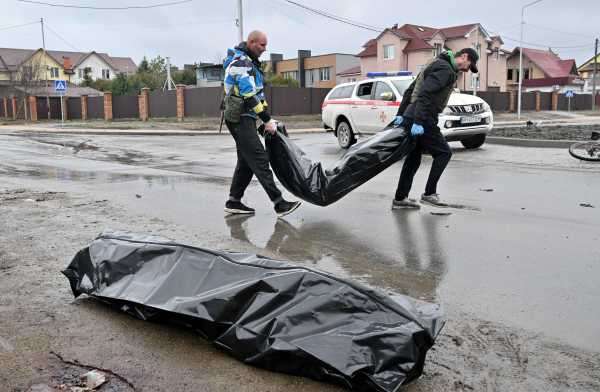 Social media posts and news reports documenting the alleged war crimes first appeared Saturday night and ignited renewed outrage among Western leaders, including US Secretary of State Antony Blinken. “You can’t help but see these images as a punch to the gut, and look, we’ve said before Russia’s aggression that we thought it was likely that they would commit atrocities,” Blinken said on CNN’s State of the Union on Sunday. “We can’t become numb to this. We can’t normalize this. This is the reality of what’s going on every single day.” Blinken previously said that he believed Russia was committing war crimes in Ukraine; the latest reports support that claim. However, both Blinken and NATO Secretary General Jens Stoltenberg declined to classify Russia’s actions in Ukraine as genocide. “It is a brutality against civilians we haven’t seen in Europe for decades,” Stoltenberg said. “And it’s horrific and it’s absolutely unacceptable that civilians are targeted and killed.”

A Human Rights Watch report released Sunday detailed specific allegations of the summary executions of seven men and the repeated rape of one woman during the first two weeks of the war. According to the report, which is based on interviews from survivors and eyewitnesses, as well as civilians living in the previously occupied areas, one summary execution occurred in Bucha on March 4. According to a witness cited in the report, Russian troops gathered five men, pulled their shirts over their heads, forced them to kneel by the side of the road, and shot one in the back of the head before a group of about 40 people who had been summoned to the town square. The Russian troops threatened to execute the others.

“Don’t worry. You are all normal — and this is dirt. We are here to cleanse you from the dirt,” the Russian commander reportedly told the witnesses.

Revelations of the alleged crimes in Bucha and elsewhere also brought renewed demands for Western nations to act, both by pledging more military support to Ukraine and by taking further punitive economic steps against Russia. Four nations — the three Baltic states and Poland — have pledged to divest completely from Russian fuel supplies and are pressuring other nations to do so; Latvian foreign minister Edgars Rinkevics tweeted Sunday that his country “will continue insisting on full EU energy sanctions against Russia & port closures” in the wake of the revelations. Latvia has joined fellow Baltic nations Lithuania and Estonia, as well as Poland, in cutting off Russian fuel imports. Lithuania has permanently banned the import of Russian fuel, a major contributor to its economy. “If we can do it, the rest of Europe can do it too,” Lithuania’s president Gitanas Nauseda tweeted Saturday.

German Defense Minister Christine Lambrecht called for European Union member states to discuss a ban on Russian fuel imports, Deutsche Welle reported Sunday. “Such crimes must not remain without a response,” she said, referring to the reports of atrocities in Bucha. Germany is heavily reliant on Russian fuel imports, which slowed the Western response to Russia’s aggression prior to the invasion. Germany says it will divest from Russian natural gas, but claims the earliest it could do so is 2024.

Lambrecht’s call to further economically isolate Russia came as Germany refused Ukraine’s request for 100 German Marder infantry vehicles, saying that the equipment is bound by NATO obligations and Germany couldn’t unilaterally hand over the vehicles to Ukraine. German Chancellor Olaf Scholz told reporters Sunday that Germany and its allies “will continue to make weapons available to Ukraine so the country can defend itself against the Russian invasion,” and promised tougher EU and Western sanctions on Russia, to be delivered in the coming days. 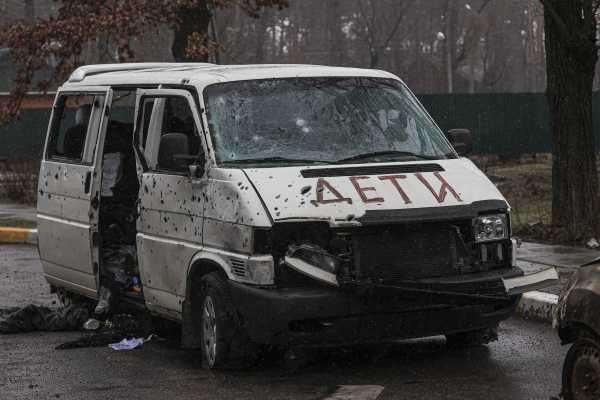 It’s not clear exactly what a harsher EU sanctions package will contain, Bloomberg reports; the bloc has reportedly been planning to strengthen those currently in place, including fully sanctioning Russian banks and imposing further sanctions on individuals.

Calls for more defensive weapons, too, increased on Sunday as photos and reports of atrocities in Ukraine circulated. The US and NATO allies have supplied Ukraine with weapons systems like NLAWs — portable, guided anti-tank missiles — and Stinger missiles, but have stopped short of providing fighter jets or implementing a no-fly zone, which US President Joe Biden and other leaders say would risk open conflict between NATO and Russia.

Ukrainian President Volodymyr Zelenskyy on Sunday reiterated the call for more advanced weapons systems from Western partners. “Unfortunately, Ukraine has not yet received enough modern Western anti-missile systems or aircrafts,” he said in an address on Sunday. “Hasn’t received what the partners could provide. Could — and still can.”

Prosecuting Russian authorities for war crimes will be incredibly difficult

Western leaders also pledged to hold to account those responsible for war crimes; French President Emmanuel Macron tweeted Sunday that the photos of dead bodies from Bucha “are unbearable” and that, “the Russian authorities will have to answer for these crimes.”

Blinken and Biden have both condemned Russian atrocities in Ukraine, with Biden even offhandedly calling Russian President Vladimir Putin a “war criminal” in March.

However, it’s a long path from documentary evidence of alleged war crimes to securing a conviction at the Hague, Kip Hale, an attorney specializing in atrocity crimes accountability and who has worked on atrocity crimes cases in Europe, the Middle East, Asia, and Africa, told Vox via Signal message on Sunday.

‘Conduct of hostilities’ cases such as the bombing of a civilian apartment building, “are often the hardest cases to investigate and prosecute,” according to Hale. “Sadly, the types of mass, violent, on-the-ground criminality that appears to be coming to light in and around Kyiv are easier cases, on balance, to investigate and prosecute.” It’s much easier to see and document that many of the people killed in Bucha weren’t combatants and that they weren’t killed as part of an operation than it is to prove that no combatants were present in a bombed-out apartment building.

But all atrocity crimes cases are challenging, at every stage of the process from data collection to prosecution, even when there’s wide-ranging support for accountability. While there is a desire to go after high-ranking Russian officials, including Russian President Vladimir Putin, that’s an incredibly difficult prospect that requires strong evidence — like commanders’ orders or insider testimony — linking higher-ups to specific crimes and atrocities.

“In all cases, the crimes themselves are the easiest part to investigate; collecting linkage evidence against mid- to senior-level officials is the most difficult evidence to obtain,” Hale told Vox. “This is why professional criminal investigative authorities or outfits are needed.”

Still, the prospect of full accountability for Russian war crimes is far from guaranteed, and war crimes cases take years to make their way through international justice systems; for example, former Liberian President Charles Taylor’s trial for war crimes in Sierra Leone took nearly five years before resulting in a guilty verdict in 2012.

Still, Venediktova has clearly stated the primary target of her office’s investigation: “The main war criminal of the 21st century is President Putin and his authorities — that they killed our people, they killed our innocent kids, that they used prohibited weapons, and we have evidence of all of this.”